Taking a Look at Some of the Survival-Oriented Uses of Metal Detectors, and How to Choose the Right One for Your Needs

Photos by Gordon D. Smith and courtesy of Barska

Maybe you weren’t expecting an article on this subject in RECOIL OFFGRID. But they’re everywhere. You’ve seen them in action on TV shows, at the beach, or on display at a local Radio Shack — well, at least when that franchise was still around. In fact, if you’ve been to court or flown on a commercial airliner in the past couple of decades or so, you’ve been scanned by one that’s the shape of a conspicuous doorframe.

Then why is it that people seem to view metal detectors as total bunk, just something eccentrics use to find buried pirate treasure but walk away with paperclips and spare change instead? What is a metal detector exactly? How does it work? And more importantly, how can it help the average prepper? Besides being a fascinating hobby that gets you out of the house, there are potential possibilities where having and knowing how to use a good metal detector might come in quite handy. Therefore, we’re taking a closer look at these devices. Whether you’re just the curious type who wants to find out what’s hidden below the surface or you’re a serious prepper looking to extend your means of finding lost or valuable commodities after a crisis, you’ll no doubt uncover some interesting information in these pages.

Born from scientific research into aircraft magnetic and directional navigation, these instruments can be analog, digital, or a combination. Even though the all-digital ones are preprogrammed, making them essentially plug ’n’ play, they still require a little study and practice if you ever wish to get good with them and elevate them above novelty toy status.

The basic idea is that an electromagnetic field flows out of the outer ring (transmitter) of the searchcoil and interacts with metal the coil passes over. This in turn generates a small electrical signal that the inner ring of the searchcoil (receiver) picks up.

Depending upon the type of searchcoil, the field can be doughnut shaped or basketball shaped or more of a narrow, focused field for specialized work. Generally, modern detectors can detect a target buried 8 to 12 inches deep. Multiple factors can influence this: size of the coil, what materials are in the earth, the moisture content, quality of construction, size of the target, conductivity of the target, strength of the batteries, and whether the target is on edge or in a flat position.

Circuitry within the control box deciphers and filters the information and passes it along to both the visual display and a speaker to create an audible tone. The circuitry can discriminate between the types of metals detected and can be directed to ignore certain metals, such as iron and aluminum, and only pick up targets of more desirable metals.

Let’s make this clear: Metal detectors won’t provide much help finding that cache of weapons and money secreted under a concrete floor, a la John Wick. Your detector would alert you to a lot of metal under that concrete, but you couldn’t discern if it was rebar or Keanu Reeves’ steely acting ability. After all, these aren’t X-ray specs.

However, what these instruments can do could be boon in dire times, such as:

What Should I Buy? 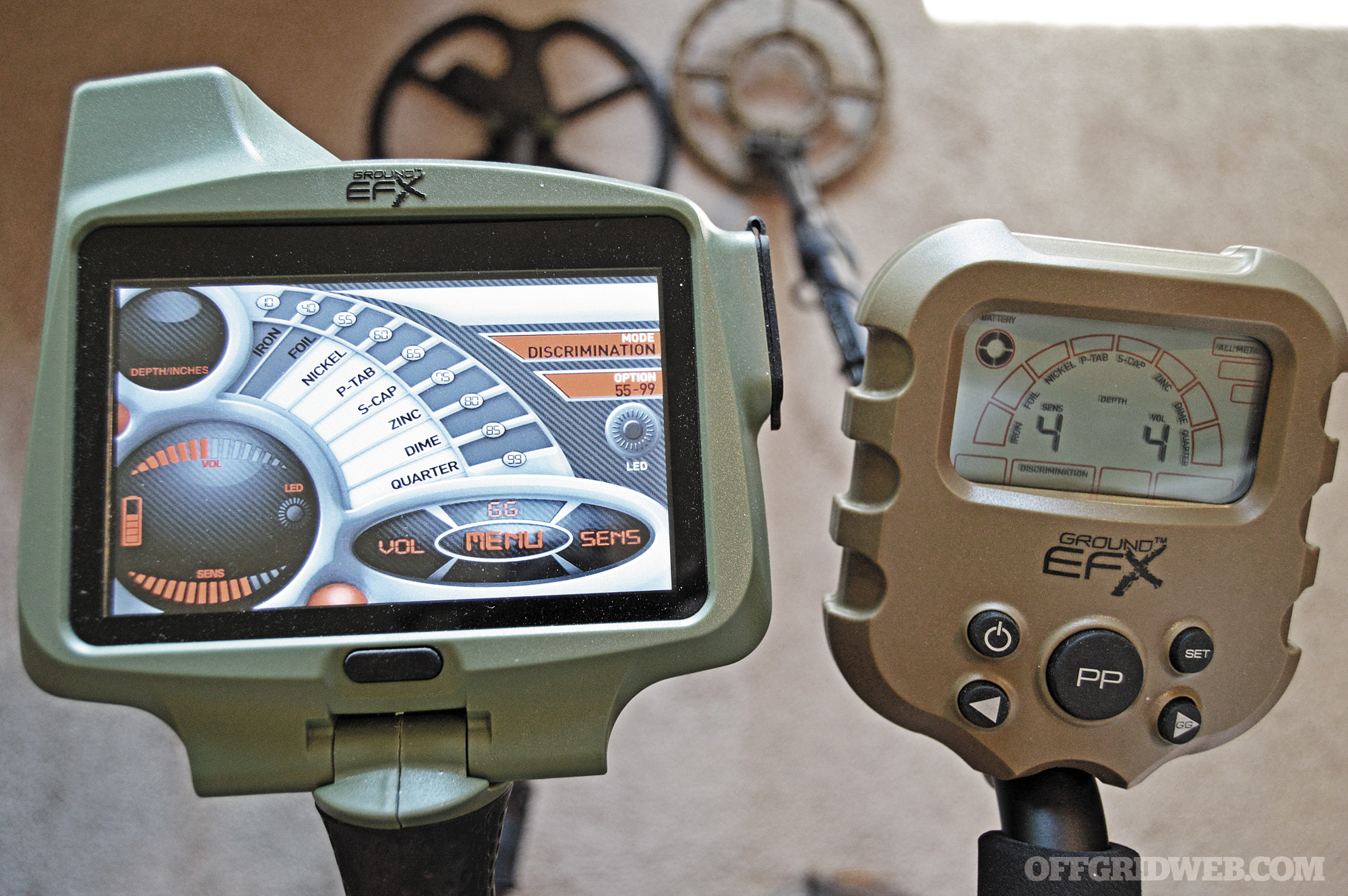 Look for metal detectors with bright displays so they’re easy to read on sunny days.

Obviously, what you’re looking for and how much you’re willing to spend on a unit will dictate what metal detector you’ll buy. But generally speaking, you’ll want to consider the following factors:

Other considerations include whether a model comes with any warranty and the ease of getting it repaired, which includes the location of service centers.

Oh, and do your needs require the detector to be submersible? Submersible models will work just as well out of water as under water.

You don’t have to spend really big bucks to get a good detector, although you can lay out more than $2,000 for the high-end models. Fortunately, the quality ones retain their value. And should you decide to upgrade, the aftermarket for them is good, with some specialty stores taking trade-ins for certain models. Initially, while learning what your detector can do, you want to set it to zero discrimination so it picks up all metals. Besides giving the operator an auditory tone when it receives a hit, the screen or meter will also reflect information about the target. Models equipped with LCD screens generally also provide information about the type of metal found and a relative depth.

Even though modern detectors take a lot of the guesswork out of getting started, it still takes practice to get really good with one.

Build a “test plot” on your own land. Seed it with different types of metals and coins at different depths, keeping each object about a foot away from the others. Clearly mark your test plot so you can easily return to it and listen to the tones generated while keeping an eye on the screen or meter.

A word about proper etiquette: Unless you’re prospecting your own land, there are a few rules that need to be observed when metal detecting. First and foremost, get permission to be on private land. If you do have permission, unless you have a written agreement that you can keep what you find, anything you find belongs to the landowner. No debate.
Here are some other tenets to abide by:

To narrow down exactly where you need to dig, pinpoint the signal. Move the searchcoil in a north-south/east-west pattern, listening and looking at the meter for the strongest tone. When you scan over something that the detector indicates is large and possibly made of a desirable metal, it’s best to start with a probe, like an old screwdriver. Probing lets you determine if there really is something below the soil at the depth indicated and avoids the need to dig an unnecessary hole.

If you decide to dig, one of the tenets of the hobby is to not leave a bunch of ankle-breaking holes in your wake — which can also be a dead giveaway of your position if you’re trying to stay low profile in a long-term, post-SHTF scenario. The best way to do this and also not kill the vegetation is to cut a plug. Plugs are cut by going half to two-thirds of the diameter of the hole you’re digging down about 3 to 4 inches and simply flipping the cut plug up.

It should allow you to continue probing and digging for your treasure. When done, replace the loose dirt and flip the plug back in place. (By the way, that’s a good tip if you have to repair a sprinkler head in your yard, too.)

A key note once you’ve secured said find: no field cleaning! Don’t attempt to clean valuable items until you’re back home; mistakes can reduce value of the find. Record the find and location in your log. If your detector features GPS capability, lock in the coordinates so you can return to the exact spot again. Above: Not bad for a lunch hour at the park playground … 9mm casings were a disturbing find, though good if you’re in a post-SHTF scenario and can reload your own ammo.

The author’s home state of Colorado is dotted with more than 1,500 ghost towns. That’s as close a figure as can be determined due to poor recordkeeping back in those boomtown days. Unsubstantiated legends abound as well.

Unfortunately, many are located on BLM or state park lands, and laws — starting with the American Antiquities Act of 1906 — prevent the treasure hunter from removing anything from those areas with just a few exceptions (such as U.S. coins minted less than 100 years ago). However, some are located on private property and, with permission, could yield some very historical or valuable items.

When you go out coin shooting or prospecting, you’ll need these basic items besides the actual detector: hand pinpointer, probe, trowel, knee pads, knife, log book and pen, golf tees, and sharpened pencils or surveyor’s flags (for marking locations). Plus, a flashlight, gloves, spare batteries, and trash bags are all essentials in your kit. A sifter is necessary if you’re heading for the beach.

Lastly, these units are mostly made up of modern plastics and don’t require a lot of care and feeding. If storing for a while, be certain to remove the batteries and place the unit on a shelf or someplace where it cannot fall or be stepped on. Also avoid storing where it will be subjected to high heat, such as a furnace room.

Local clubs are a great source of information and expertise. Some may even have access to private lands. Also, the old-timers can save you a lot of headaches by cluing you in on nuances of local laws. Metal detecting has become a popular hobby for thousands of folks around the world as well. Europe is a big detecting country — so much so that White Electronics has even opened a plant in Scotland to meet the demand.