At SHOT Show 2022, Trailblazer Firearms Showed Us Their New Folding PCC That Could Serve as a Compact Backpack Gun or Trunk Gun

Written by Patrick McCarthy on January 24, 2022

At SHOT Show 2022, we ventured into the basement in search of hidden gems. If you've ever attended the show in Las Vegas, you'll know that this level of the convention center is typically filled with smaller companies and startups, so it often breeds some of the most interesting (and bizarre) new products. One firearm that we found there might fall into either category, depending on your personal opinion: the new Pivot 9mm rifle from Trailblazer Firearms.

How the Trailblazer Pivot Works Unlike most folding rifles, the Trailblazer Pivot does not fold in half via a hinge in the midsection. Instead, the upper and lower halves of the rifle unlock and rotate 360 degrees in either direction. The locking mechanism is controlled by a button at the front of the lower receiver, and it includes a safety feature that prevents the Trailblazer Pivot from folding if the bolt is forward or if a magazine is inserted. There is also a manual thumb safety lever.

Click here for a video of the Pivot we recorded on the show floor.

Overall length in folded configuration is 20.9 inches. Unfolded, it measures a maximum of 29.7 inches. Width is just over an inch, and unloaded weight is 5 pounds. 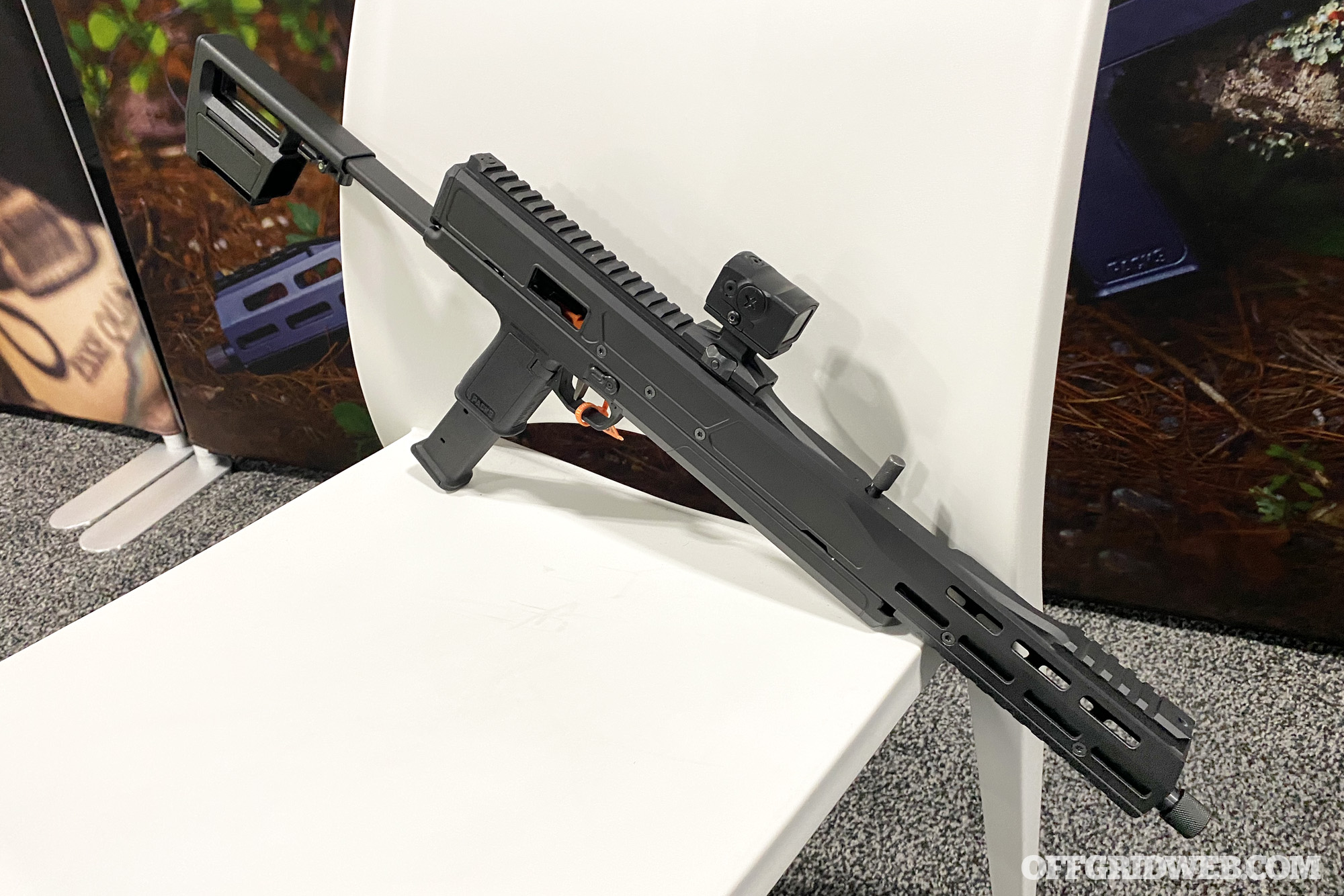 The Trailblazer Pivot has a full 16-inch barrel, so it's classified as a rifle and can use an adjustable buttstock without requiring an NFA tax stamp. The barrel is threaded for addition of a suppressor or muzzle device. Most of you will be pleased to learn it takes Glock 9mm magazines, which are plentiful and relatively inexpensive (if you don't already have a bag full of them). A cavity in the stock accepts another Glock mag, so you can carry an extended magazine (such as the Magpul 21-rounder seen here) when it's time to pack the rifle. Since the early prototype we handled wasn't quite ready for mass-production, the mags felt somewhat loose in the stock, but we're told this retention will be corrected for the final version.

Both the upper and lower receivers of the Trailblazer Pivot feature M-LOK slots for accessories such as flashlights and foregrips. The upper also features two sections of Picatinny rail for optics and backup iron sights. 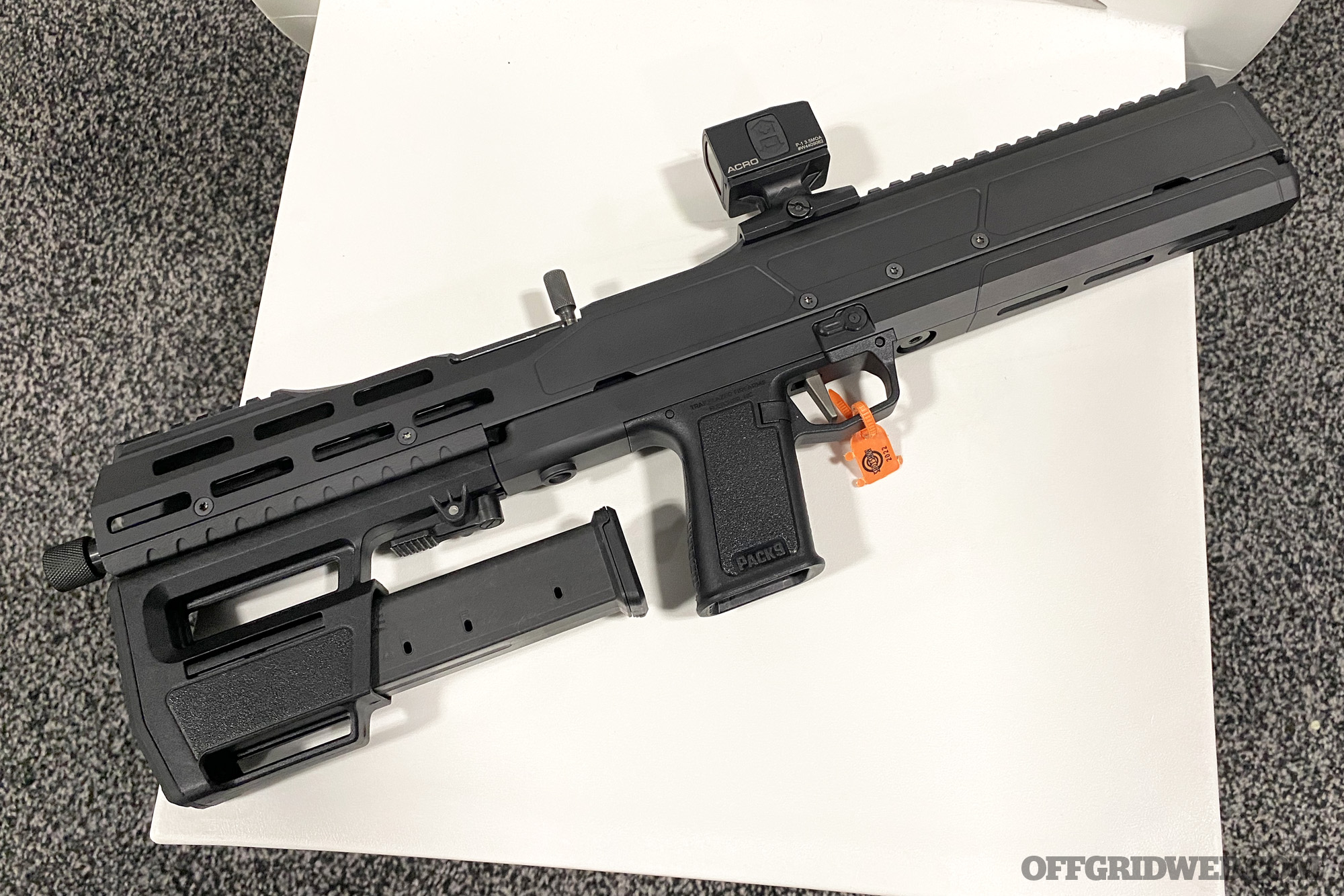 As a result of its slick folding mechanism and outside-the-box design, our colleagues at RECOIL awarded the Trailblazer Pivot “Best of the Basement” for SHOT Show 2022. That might sound like a backhanded compliment, but as we mentioned earlier, we love to see unusual and creative products like this one in the lower level of the show. We hope to give the Pivot a full review once test samples are available later this year.

For more information on the Trailblazer Pivot 9mm rifle, go to TrailblazerFirearms.com/pivot-rifle.

POF USA has announced its entry into the modernized lever-action rifle market with the new Tombstone 9mm carbine.