How To Set Up A Plate Carrier

Written by Forrest Cooper on February 2, 2021

A plate carrier, a modular handgun, and an AR-15 go hand in hand for more than one reason. First of all, they belong in the hands of military, law enforcement, and civilians. Second, each carries a sense of urgency and personal responsibility. Finally, each takes a shape of its own depending on how the owner chooses to set it up. While a plate carrier set up will inherently bear some subjectivity to the wearer, some rules should be followed as well. Here's how to set up a plate carrier.

The fit of the body armor comes first, before pouches are incorporated. The process of continual refinement reflects both on individual users, and those developing new gear. In the past, plate carriers have gone through something of a pattern resembling orthodoxy-reform-new orthodoxy, where a certain setup was considered absolute and gospel, only to be eventually challenged replaced with a new trend. Many of these were highly directed by various military and police standard operating procedures, or SOP's. But in the last years, a much broader approach has become mainstream, with more focus on the end user's performance and a little more room for experimentation. As a result, a short list of rules cannot be broken, but outside that small circle, guidelines, suggestions, and trends shift depending on use. Above all other rules, propper plate carrier fit reigns supreme.

A Level III, Level VI, or Special Threat Plate is designed to stop a specific set of projectiles. By protecting the heart and lungs, it gives the wearer a distinct, but limited advantage in a violent encounter. The body is made up of timers and switches, and the heart and lungs have the shortest timers if damaged, short of the brain and spine. The front plate, then, needs to ride roughly from the center notch of the collar bone and cover down to about the base of rib cage. The rear plate mirrors this, though typically rests a little higher, with the top edge sitting about even with the tops of the shoulder blades. A properly fit plate carrier keeps the plates secure when running, climbing, moving through buildings, and diving for cover, all while not inhibiting one's range of motion too much. The shoulder straps should adjust to set height, and the cumberbund to prevent the plates from bouncing when running. Mags, pouches, and plates jostling and bouncing around rapidly wear out the bearer, and pose a risk of injury when climbing. While most of the weight will rest on the shoulders, a slightly tighter cummerbund reduces this pressure.

As a principle, loaded pouches should ride as close to the body as possible. This may sound like a pithy maxim, but it goes unheeded far too often, at the wearer's expense. The emphasis on minimalism has gone a long way since earlier days, but can be mistaken for trimming the wrong gear. Those buying their own kit have the opportunity afforded by years of development to choose between a variety of equipment manufacturers, mixing and matching where they see fit.

The four categories of gear worn divide into ammunition, medical supplies, admin, and the ever ambiguous mission-specific equipment. Though lighter gear of the same capability will almost always be preferred, so long as it performs the same or better, this imperative often pits the good against the great.

The 3-wide, single layer mag “shingle” reigns as as the clear de rigueur of our time, with a mag sometimes referred to as the “speed mag” mounted to the cumberbund on the non-dominant arm side. In the last ten years, the trend has pushed some magazines typically carried on the Plate Carrier to the Belt, with many opting to reload off the belt first as habit. As magazines are expended, fresh mags are shifted first to the speed pouch, so that in the event of an emergency reload, the shooter can go straight to their fastest mag. Magazines worn on the front of the carrier should only “double-up” in very rare, specific circumstances. It's nearly impossible to translate how badly more gear directly turns into an inability to effectively lay prone behind low cover.

Often personal medical gear gets stowed on the belt, or according to unit SOP's. If able to choose for yourself where a personal first aid kit will integrate, pick a location accessible by both hands in the event one receives disabling injuries. Outside of the kit, tourniquets should be distributed across the body where they can again be accessed by both hands. Individual application will vary, but generally speaking at least one tourniquet should be attached to the plate carrier, even when worn in conjunction with a duty belt. This serves as insurance in the event the belt is lost, or one does not have time to put it on. Recently various forms of “danglers” have sought ot accomplish this, while others opt to use a breakable rubber band or shock chord.

Before chest-mounted cellphones were a thing, the top section of a plate carrier was typically kept slick or an admin pouch with maps, pens, and spare batteries and other miscellaneous items were often placed just above the magazines for easy access. Lately, gear like KAGWERKS or Juggernaut cases have dominated this space, offering users a video-game-like access to information with programs like ATAK. Above: Toor Knives Vandal, fits on Kit and as a Belt Knife.

Even when using a chest-mounted computer, it is recommended to have a dedicated admin pouch if one is not designated on a uniform. The U.S. Army's attempt at putting pen holders on their sleeves might have looked like a good choice, but more often than not, “in the field” those pens were broken before use. Dedicating a specific admin pouch on a plate carrier takes one step out of putting on one's gear, saving time and making it easier to keep stocked up.

Radios have always presented a difficult decision to the bearer. If carried on the front, they could be accessed easier, at the cost of real estate. If carried on the back, a radio would be out of the way but often forcing the wearer to depend on a teammate to access it if a battery needed to be changed out or a frequency was lost. The black magic element of radios is their propensity to attract Murphy's Law. 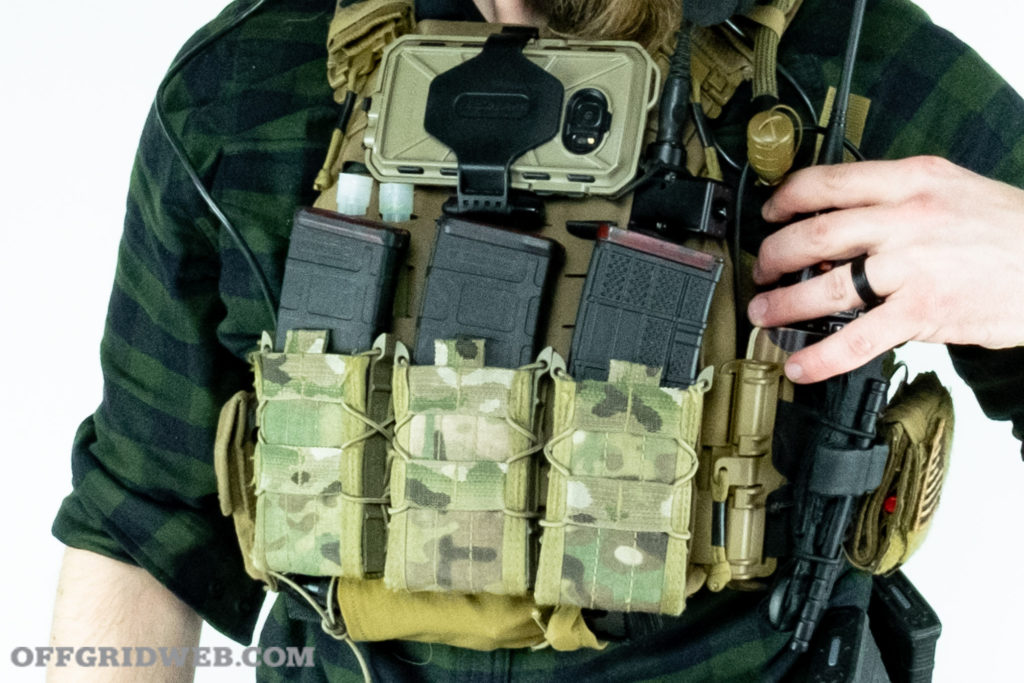 Either way, the most common location to integrate a push-to-talk or PTT, which connects a radio to a communications capable headset, has long been the front non-dominant side of a plate carrier, to allow access while keeping a finger on the trigger of a firearm. Attempts have been made to drop it onto to cumberbund, but this has mixed opinions. If carrying two radios, one does not want to have to think about which PTT they are activating while in the middle of a tense situation.

The back of the plate carrier draws the ire of many a zealous minimalist, as it follows the same rule of motorcycle saddlebags and backpacks: if there is free space, something will end up filling it, quickly adding both weight and bulk. A survivalist plate carrier setup, those preparing for a longer operation, or when carrying larger gear, it is possible to opt for a full backpack instead, worn over the plate carrier. If this is the case, once again, less is more. If not carried in the pack, a water bladder can be attached to the back, so long as it is protected by some sort of sleeve or pouch.

Those in the military or law enforcement should be able to look to their leadership for guidance with mission-specific gear. Allowing for ingenuity should be encouraged, but limited to training scenarios and vetted for some time before potentially seeing combat. With a plate carrier load-out, the little things have a big impact, such as finding out where gear pinches, or moves. As each piece is added, the bearer should test it for movement and jostle by donning the plate carrier. Like a backpack, heavy equipment stored further from the body only exhausts precious energy, and potentially gives away one's position by banging against walls, cars, and other objects.

Keeping a small amount of shock or bungee chord on hand can take the extra play out some things that move, and if a thing can fall out on it's own, expect it to when needed most. Dampen the noise of metal buckles with electrical tape, Ranger Bands, and elastic sleeves. Trim loose ends, and make sure nothing dangles off the belt or back of a carrier. It will inevitably snag, risking injury, exposure, or destroying equipment in the middle of a high-speed airsoft match.

Building a plate carrier is a highly personal process, and requires a fair bit of humility to acknowledge just one is doing so. The difficulty with this kind of equipment is much like a permit to carry: we should truly hope that we never have to use it, and a responsible owner will be honest about their capabilities. A weighted vest helps greatly for improving fitness, and things like the Tactical Games have brought a new opportunity landscape to popular firearm competitions. Accessible by all, and physically demanding, Tactical Games Skirmishes make excellent gut checks to ego, and help trim the dead weight off a plate carrier. Two extremes stand out in regards to plate carrier setup: the hyper orthodox who demands compliance to a rigid SOP without explaining it to his men, and the rogue experimenter who sticks out by challenging the norm, often with no specific problem to solve. Millions of hours of experience from the last near 20 years of war slowly trickle into gear companies, and the change is often slow, tempered by the reality that we're dealing with serious life-saving equipment.

Tenkara is a minimalist fishing method thatâs surprisingly close to what most people envision when they think of...