Editor's Note: In yesterday's OFFGRIDweb-exclusive article, we shared Part 1 of our deep dive into the subject of plate carrier placards. If you haven't read it already, go check it out — it explores four different placards for general-purpose and weapon-specific applications. Read on for Part 2 of the article, where we'll address a MOLLE-compatible placard that allows you to bring your own pouches, and show how modular placards can be applied to chest rigs in situations where armor may not be necessary. What piqued our curiosity with this placard was not its load carriage. While we appreciate the use of laser-cut, we were more interested in the fact that this Dynamic Principles placard actually has TacTik buckles mounted directly to the ends of it. Our Arbor Arms CAS 2.0 plate carrier already uses a QD cummerbund with TacTik buckles, so this presented an interesting new option not to how we load our plate carrier, but to how our carrier wears said load. Using the Dynamic Principles placard allows us to bypass the need for those buckles, since the cummerbund arms can “click” directly into the placard itself. The CAS 2.0 specifically has the ability to remove the TacTik buckles from the front plate bag. So, if you were to use the Dynamic Prinicples placard as your “dedicated” front plate for this carrier, you could rely solely on the placard's own buckles. 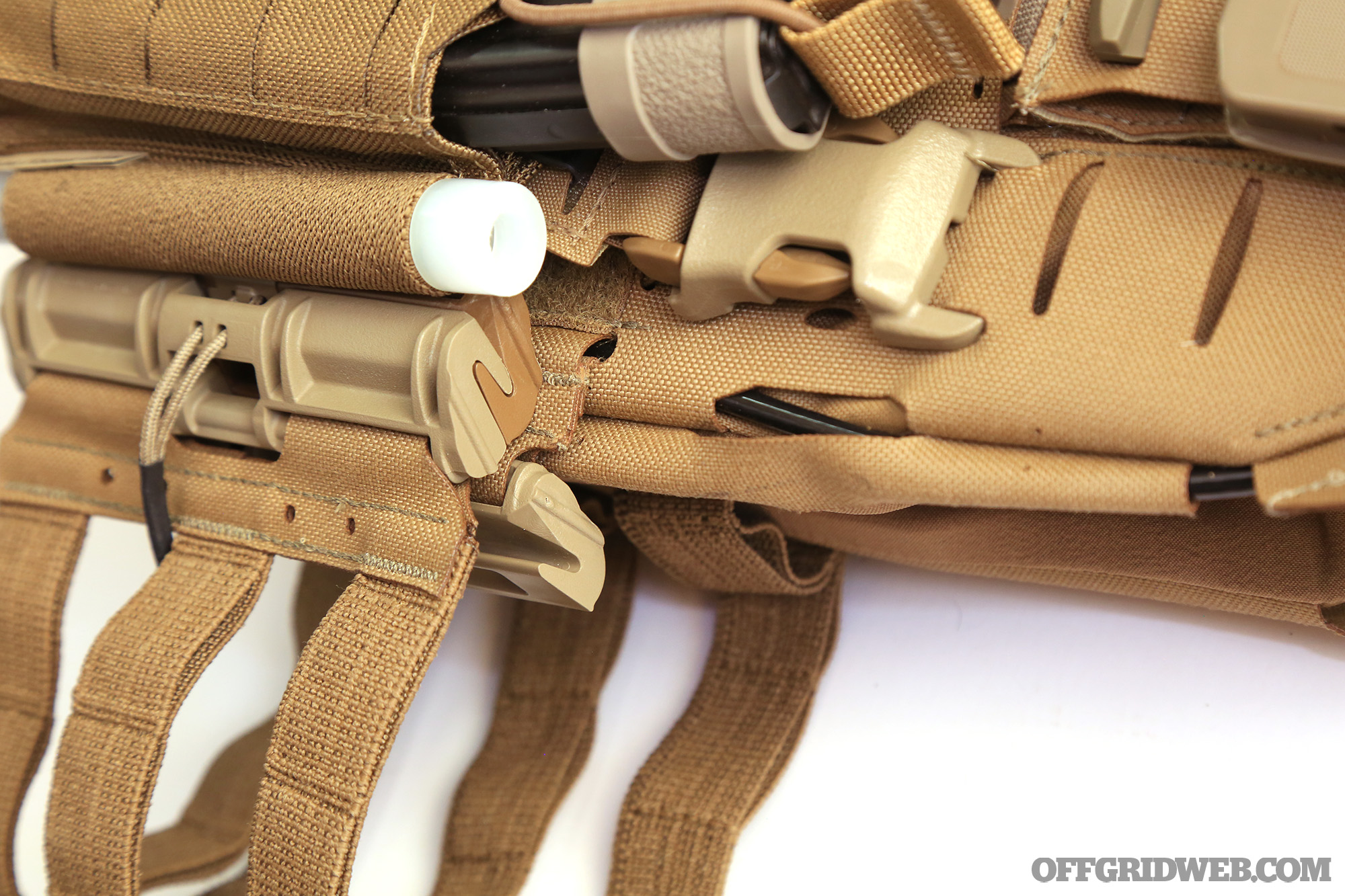 Above: The cummerbund on our Arbor Arms plate carrier can be connected directly to this Dynamic Principles placard, maintaining a snug fit and eliminating the need for sandwiched Velcro adapters.

What’s gained from this? If your cummerbund is elastic, or partially elastic, this would push the mounting point further forward and put a little bit of additional load on the elastic. If you have a problem with your plate carrier bouncing or shifting, or just prefer a snugger fit, this is one way to address that. Likewise, you now have cummerbund holding tension directly on the placard – the part which is bearing all the weight of your ammo and other gear. Any placard, especially those with heavily-loaded MOLLE pouches woven into webbing loops, will begin to sag after extended periods of those pouches pulling on those loops. Repeated tearing and re-pressing of the Velcro, plus environmental factors like dust, mud or water, will also weaken the bond between plate bag and placard. Even if your plate carrier sits snug against your body, those pouches on the front may still shuffle, rustle or bounce a little when moving once placard fatigue sets in. Using the cummerbunds to literally pull-in against the placard helps secure the placard, and the load its carrying, against your carrier for a more secure placard-plate-carrier-torso sandwich. 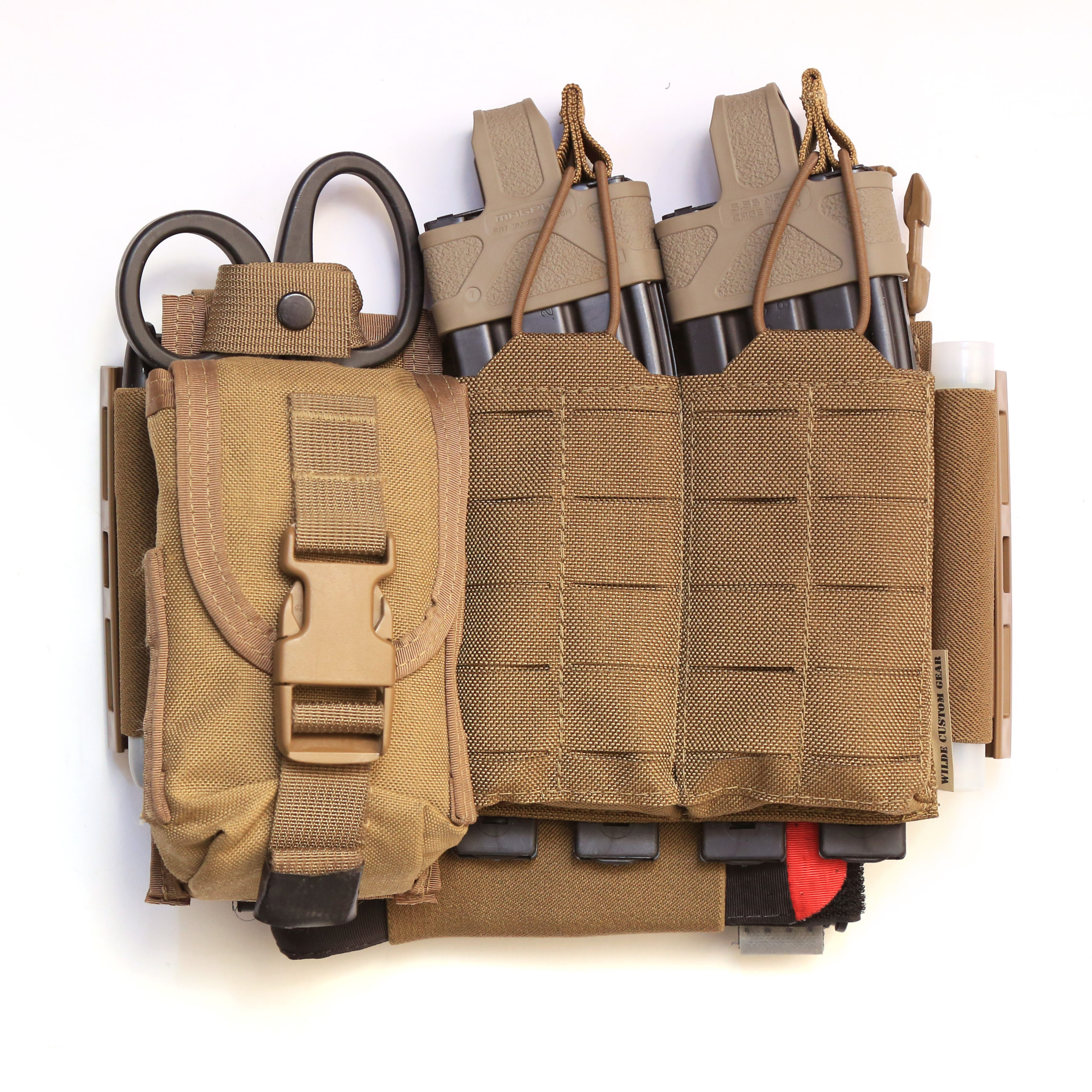 Having said all that, we certainly don’t want to overlook the placard itself. The all-MOLLE design gives maximum modularity to use whatever pouches you may already have in whatever configuration you prefer. If none of the “pre-set” placard options we’ve covered tickle your fancy, you could simply purchase several of these and build out your own pouch suite on each one for different purposes. We set this one up for general carbine use – think range days or weekend classes. The double magazine pouch is from Wilde Custom Gear, paired with a Bleeder/Blowout Pouch from HSGI. In addition to the standard-width six rows of MOLLE loops, the Dynamic Principles placard has three elastic loops. A wider loop on the bottom edge of the placard for a fast-access tourniquet, and a narrower loop on either end ideal for Sharpie markers, chem lights or other slender, cylindrical tools. These loops are a nice touch that add some low-profile bespoke storage for a couple few small items to make life easier for the end user. There are plenty of all-MOLLE placards out there. But the direct-connect feature, and “nice touch” onboard elastic storage set this one apart in a sea of otherwise-all-the-same.

What About Placards on Chest Rigs? 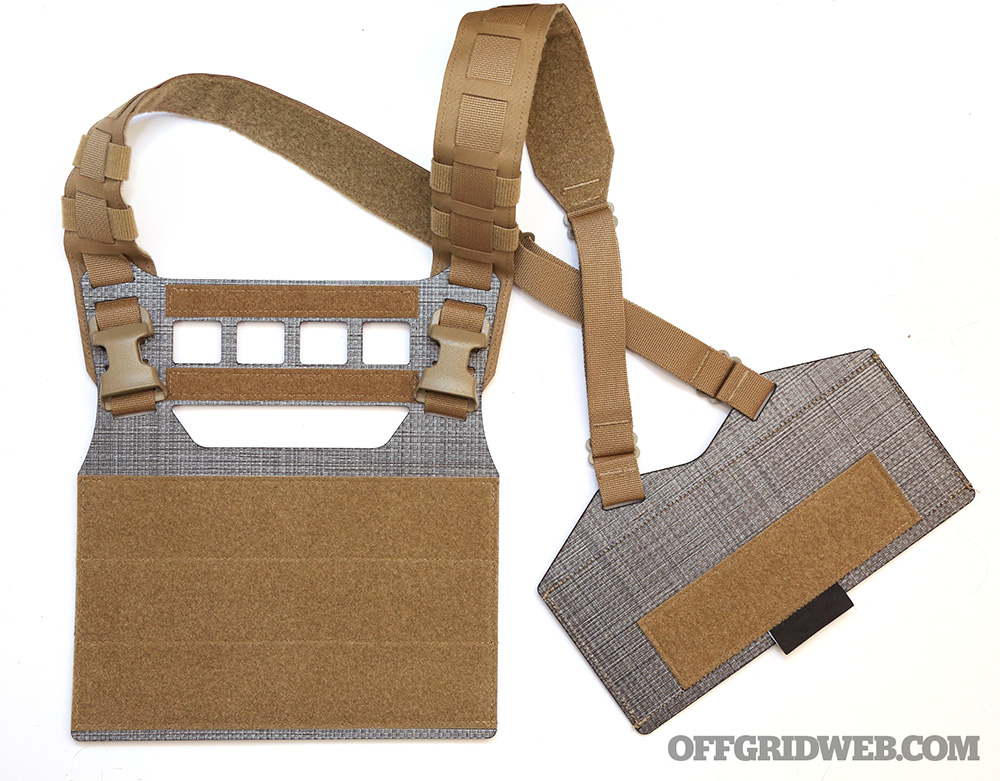 Plate carriers like the CAS 2.0 are great for hosting a variety of placards, but is there an equally modular solution for those who don’t need to wear armor? The answer we found comes by way of Javlin Concepts, in the form of their JCR (Javlin Chest Rig). The JCR is lightweight design that, like the CAS carrier, is able to host placards from across an array of manufacturers. The JCR Base consists of two rigid, lightweight, Tegris panels covered in soft-side Velcro and connected by an X-style shoulder harness. It should be noted that there the JCR Base does not come with any kind of cummerbund or closure system, so you will have to add your own. We went with a 3-inch Hybrid Skeletal Cummerbund by Defense Mechanisms. This cummerbund is designed to attach to their Mission Essential Plate Carrier by large Velcro panels sewn to either end of the cummerbund, but the configuration of the JCR Base panels allow them to adopt the Def Mech components without any hassle or heartache. The flexible, semi-elastic cummerbund arms are equipped with TacTik quick release buckles, identical to those on both the CAS 2.0 and the Dynamic Principles placard – creating a seamless ecosystem between panel, plate carrier, and chest rig. The rigidity of the JCR helps support even fully-laden placards and cummerbunds, while adding little additional weight or bulk to the system as a whole. It can also be worn over slick or low-profile armor carriers for a scalable two-part system that can include armor as needed. Above: The Wilde Custom Gear PCC placard (discussed in Part 1) on our JCR chest rig.

There are three primary factors that will affect how well your placards fit to you plate carrier: buckle size, width between buckles and lead length from the “male” end buckles to the placard itself – the latter affecting at what height the placard sits. These dimensions are not standardized across the entire spectrum of plate carriers and chest rigs, or even within the same manufacturer, which is demonstrated in our sampling here. A couple of the issues we noted: Above: The HRT Tactical shotgun-specific placard attached to the Javlin Chest Rig.

None of these issues are an indictment of the placards, or their manufacturers. But consider it an advisory that there is not a hard industry-wide standard for these kinds of placards and their mounting footprints. The lead-length/placard height issues were easily remedied, thanks to the design of the Arbor Arms CAS 2.0. The CAS 2.0 has multiple sets of cutouts for mounting female QASM-type buckles and, since the buckles are not hard-sewn to the carrier, they can be moved to whichever row of mounting loops provides optimal height. Likewise, those placards with slightly-narrower buckle spacing didn’t suffer. The width disparity was not enough to prevent any placard from clicking in to either the CAS or JCR and sitting flat. Based on our experience, it’s unlikely that one plate carrier or chest rig will play nice with every modular placard on the market. But we were able to find enough positive matches across an array of manufacturers to make the prospect viable. Straying outside of the sample combinations listed here is certainly possible, although may take some trial-and-error. Be prepared to either utilize a few companies’ return policies or have some conversations with their customer service reps to determine width-between-buckles before you put money down.

The JCR—the only chest rig we’ve seen to utilize a blindly modular system—further expands the possibilities for a successful multi-placard “armory” that doesn’t require lugging around armor plates. The idea of one host with swappable faceplates is far more attractive than setting up multiple, dedicated rigs for different uses. But your needs will dictate how necessary or beneficial this type of placard ecosystem would be for you.