In the years following World War II, a number of unique rifles were developed for survival use by downed pilots and aircrews for the U.S. military. Not intended as fighting weapons, they were more or less designed to help a downed pilot or crew forage for small game. One of my favorites has always been the M6 Aircrew Survival Rifle.

This was a superposed combination of a rifle barrel mounted atop a shotgun barrel. The rifle was chambered in .22 Hornet, and the shotgun was designed for a .410 shotgun shell. Each barrel measured 14 inches in length. The M6 could be folded in half for compact storage with nine rounds of .22 Hornet and four shotgun shells (the original loadout specs were two bird loads and two rifled slugs) stowed in the buttstock. It was made by Harrington & Richardson under contract with the Army’s Ordnance Corps and was designed by Lieutenant Colonel Franklin S. Allen. More thought went into this simplistic design than you might think.

For one thing, it’s probably the only military-issued weapon without a trigger guard. The reason being was that during the Cold War, many aircrews found themselves flying over the Arctic. Extreme cold weather dictated the wearing of mittens or heavy gloves. A worse-case survival situation in the Arctic can expose you to subzero temperatures for long periods of time while awaiting a rescue or trying to seek help. This isn’t a situation where you want to have exposed flesh for any length of time.

The engineers who designed the M6 had this figured into their requirements and incorporated a trigger bar that must be depressed in order to fire the rifle as opposed to a conventional trigger that’s squeezed. Again, this wasn’t a firearm intended for fighting like most military rifles; this was primarily intended for foraging and small-game hunting in an extreme survival situation. 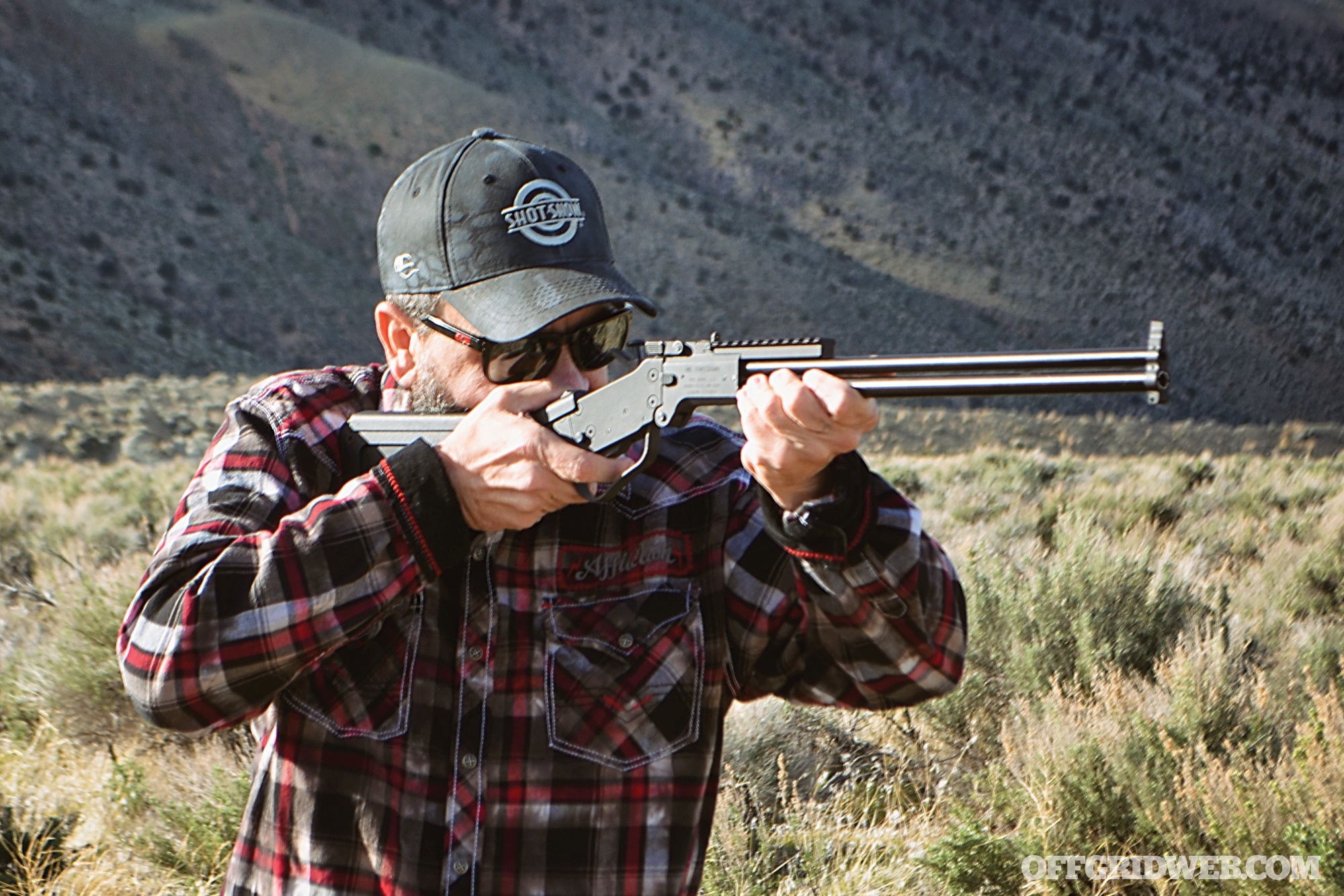 Having 14-inch barrels made an exact copy of the M6 Aircrew Survival Rifle a no-go as a Title 1 firearm (non-NFA), and prior to around 2005, everyone and their mother thought that having a dealer complete a single-sided federal form was a paperwork hassle. So, Springfield Armory had a replica made in Czechoslovakia with 18-inch barrels and called it the M6 Scout. The M6 Scout could be had in either stainless or the original stamped steel and parkerized finish and offered the rifled barrel in the cheaper .22 LR as well as .22 Hornet. A .22 WMR (Winchester Magnum Rimfire) version was listed in their catalog for years, but I personally never saw one.

For liability reasons, Springfield added a trigger guard, through which only a child’s hand will fit. Because the M6 Scout was made in Europe, they made a smaller diameter sling swivel at the front, but unexplainably made no provision for attaching a sling at the rear of the buttstock.

To attach a sling, most shooters drilled out the front swivel mount to accept a standard sling swivel. I went with a smaller European-style swivel, as I like leaving my firearms as much intact as possible, and attached a spare M1 Garand swivel on the buttstock. Lastly, I removed the unsightly and useless sheetmetal trigger guard to be able to shoot it properly and actually fold the Scout in half for storage purposes. Otherwise, you must separate it into two pieces and hope you don’t lose the hinge/takedown pin along the way. You can buy scope mounts for the M6 Scout, but since the rifle is long out of production, these can be expensive and of limited use, as you must sight in two separate barrels. The only other addition I made was adding a nylon sling.

Shooting the M6 Scout was quite a challenge if you were used to using your trigger finger. Simply put, this will never be a precision rifle. Still, its compact size and light weight make it a no-brainer to tote as a small-game piece if you’re a backpacker, cross-country skier, hiker, rider, bush pilot, or find yourself in a survival situation with minimalist gear.

It may be tempting to add a red-dot sight or attach a light, but this isn’t meant as a primary hunting rifle/shotgun or an entry gun. This is a basic survival kit with enough onboard ammunition storage to score a few meals off the grid. 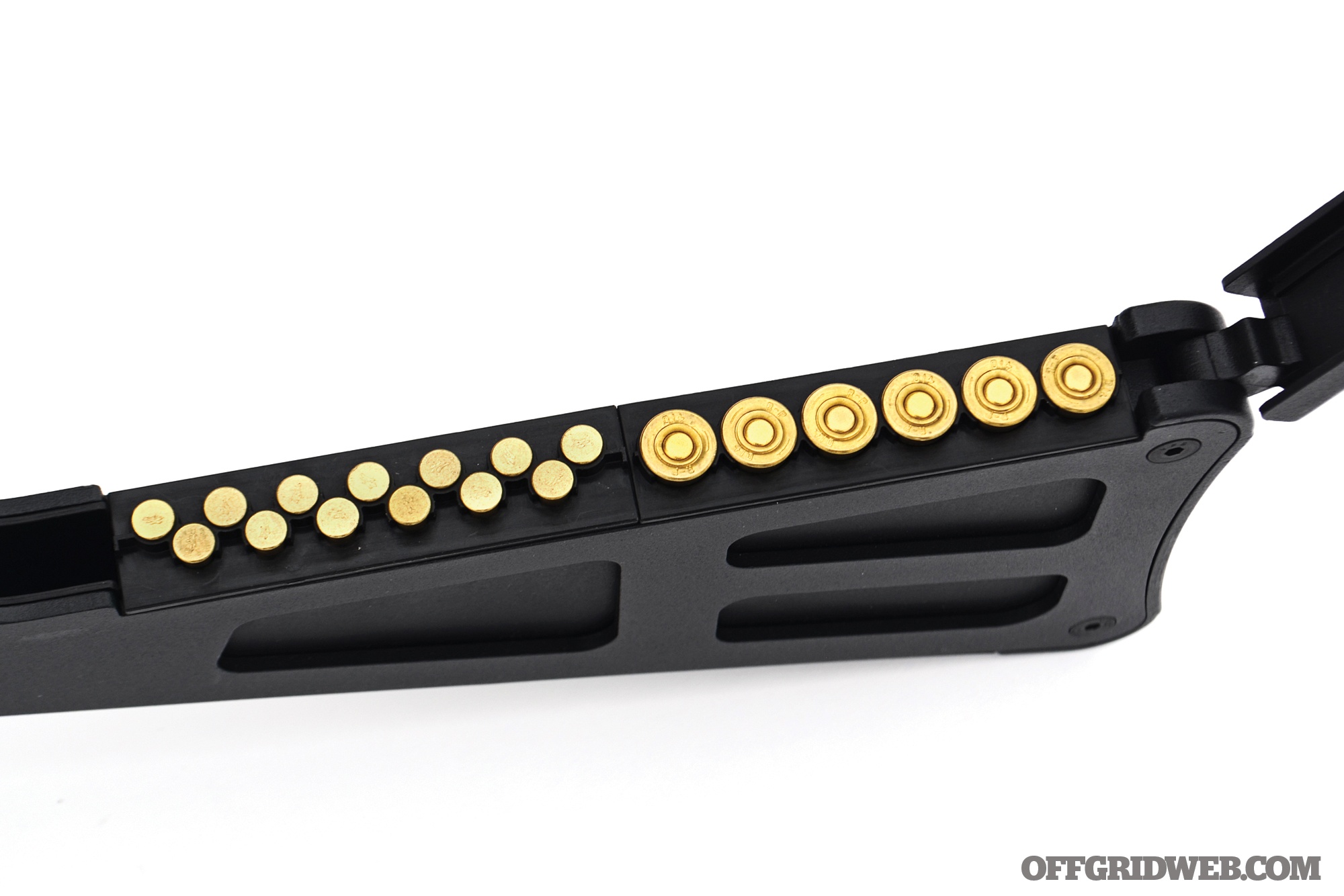 I’m not certain when Springfield Armory stopped making the M6 Scout. I can recall seeing a new one in a gun shop in either 2003 or 2004. As much of a niche firearm as it was, when used versions began approaching the $1,000 price point, a lot of preppers and people who had a need for one flinched at that price.

Thankfully, TPS (Tactical Parts Supply) Arms came to the rescue and revived the design in mid 2018. They incorporated a few much-needed improvements as well.

First, they added a choke tube system based on the Winchoke system by Winchester for the shotgun barrel to make that portion more versatile. TPS offers these chokes in Improved cylinder, Modified and Skeet.

Secondly, TPS Arms offers a removable Picatinny rail, allowing the shooter to mount a scope or red dot sight if they so choose.

The third major improvement is the introduction of a captive takedown pin similar to a lower receiver pushpin found on an AR-15. This keeps you from losing the pin in the field. 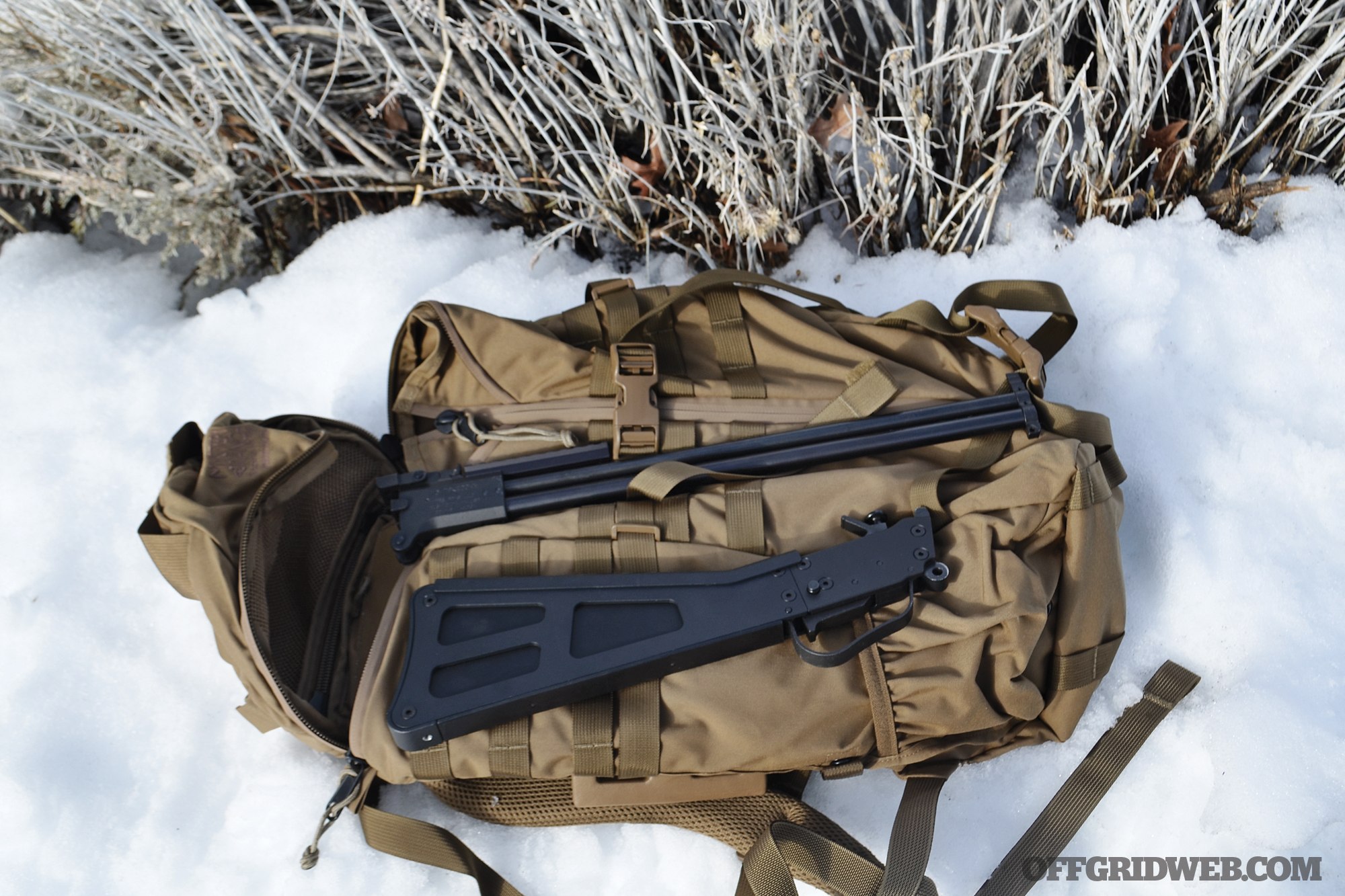 Before we took the test rifle off to the range, we performed some testing that we don’t normally conduct. Taking advantage of the winter storms in the Sierra Nevada in early 2019, we left the TPS M6 out in the elements for three days. Ice, snow, freezing rain, and three days of subfreezing temperatures might cause certain firearms to fail; such wasn’t the case with the TPS M6.

The one problem I did run into was trying to reassemble a rifle that had been taken down while I was on the range. Aligning the holes on the barrel group with the pin located on the stock was problematic. Be it the cold or me being a spaz, after 30 minutes I simply couldn’t get the M6 back together, as the captive pin kept me from checking for proper alignment. I had no such problems while disassembling and reassembling the rifle in the house where it was warmer.

As luck would have it, I had an AR hammer pin in my truck (no, I don’t know why) and sliding it in from the opposite side allowed me to align the holes and get it back into action. A similar tool, such as a Philips head screwdriver or other narrow tool, should help anyone else out of this situation, particularly if you’re doing so in adverse weather while wearing gloves. You can add an optic to the rail of the M6 Scout or use its built-in sights, shown is the peep sight when firing the...

In discussing this with TPS Arms, I’ve learned that their new pin has more of a taper to it, which should eliminate this problem in the field.

When firing the M6, you select which barrel to fire by means of a pull knob on the handle. Pull up to fire the rifle barrel, push down to fire the shotgun barrel, and leave it in the middle to keep the striker in a neutral position. With the striker in the correct position, you simply manually cock the hammer, and it’s ready to fire.

It’s important to note that the striker in the neutral position doesn’t make the M6 completely safe, as it can be bumped out of position with enough impact. So, the M6 makes use of a safety button mounted above the trigger bar.

Like the original, TPS Arms incorporated a folding rear sight that uses one position for firing the rifle barrel and a secondary notched blade for use with the shotgun barrel.

At the range, the TPS M6 shot true to point of aim at 25 yards using a wide variety of .410 ammunition. We fired slugs, small-game loads, and a few 3-inch buckshot rounds. While TPS offers a skeet choke, I don’t see anyone running a skeet or five-stand match with one of these little guns. However, it could make for a decent patterning option when using birdshot or a small-game load.

Shooting the 22 WMR barrel with Hornady V-Max and its 30-grain bullets gave us about a 1-inch-sized group at 50 yards, except the occasional flyer when we rushed the shot due to the cold weather.

I used the factory sights, which are a very smart and forward-thinking feature regarding the rear sight system. The rear sight flips to either the rifle position in a peep sight or a wider V-type rear sight for the shotgun. Of course, if you cannot shoot well with iron sights, there’s a Picatinny scope mount available or a red-dot sight if that’s your preference.

As mentioned previous, the buttstock is a bit wider than the original military version and the Springfield Armory version, which makes the TPS M6 much easier to shoot well. 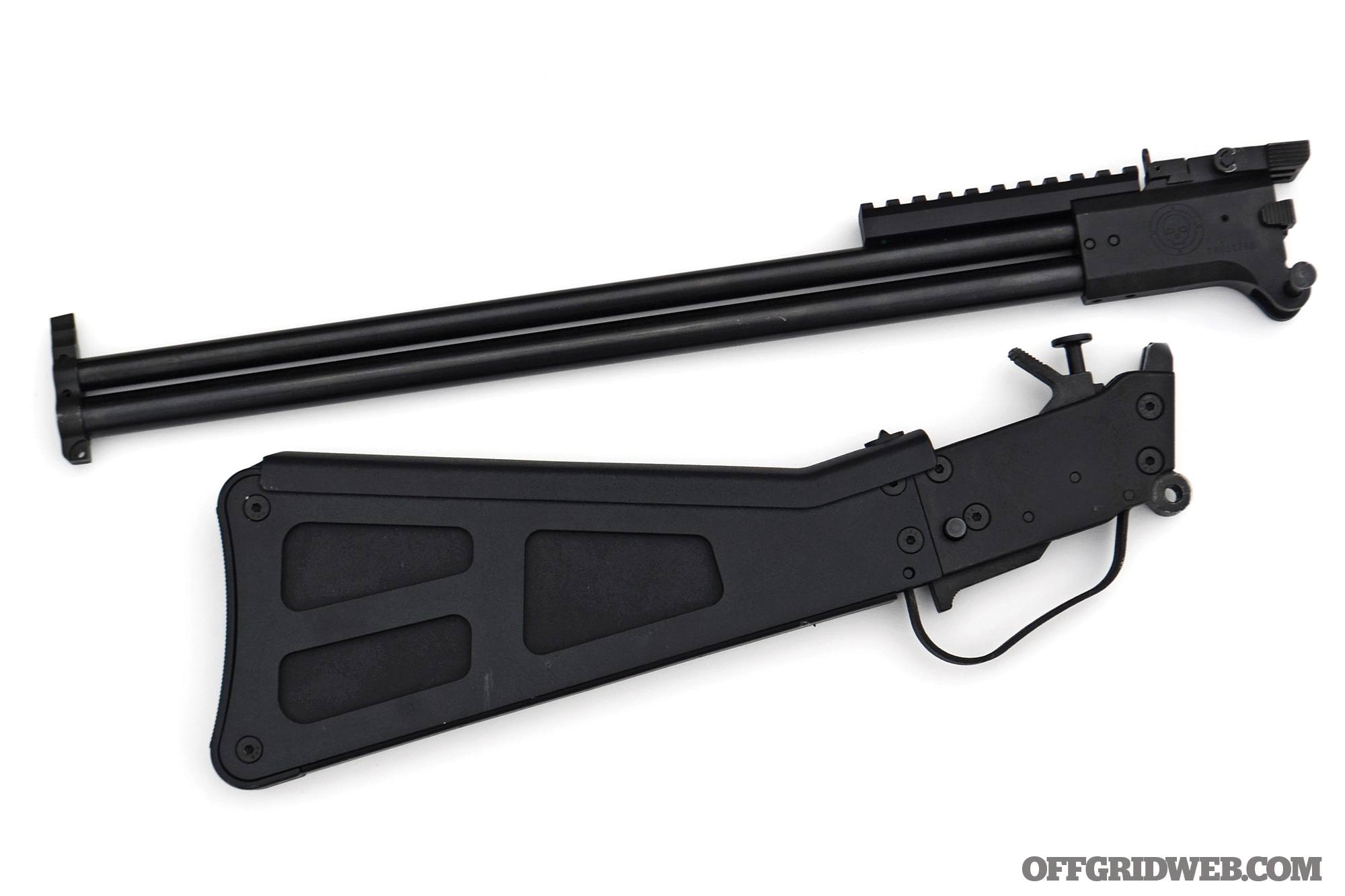 While lightweight and portable at a hair over 5 pounds, the M6 Scout can be broken down for more compact storage if...

TPS Arms turned a good rifle into a great one and has completely revitalized this survival tool. In speaking with the owner, I got the impression that they’re completely invested in this project and may have several exciting options planned for the future of this rifle.

This updated take on a classic survivalist piece is a great tool for harvesting game, should you find yourself in a true off-the-grid survival situation. You can use your fingers to mash the trigger bar with your whole hand if you want to recreate the original intent of shooting the M6. It’s fun for a while, but we figured out a better way of manipulating the trigger for improved accuracy by using just the trigger finger to squeeze the “toe” of the trigger bar like a conventional trigger.

The Steambow AR-6 Stinger II is a pistol-style crossbow with a quick rate of fire, an adjustable stock, and a host of...