DIY Drone Drop: How to Deliver Payloads with a Consumer Drone

It’s Easy to Configure an Inexpensive Consumer Drone to Transport Various Small Cargo, From Radios to Thumb Drives and More

Drone shopping can be a bit like car shopping today. Not everyone needs a sports car — some families need a van for soccer practice and others need a truck for work. Just as the original Ford Model T quickly transformed into a wide range of two-door, four-door, and convertible variants, drones have come a long way from being a one-size-fits-all solution. Early commercial drones were instrumental for filmmakers and videographers. The best ones were usually made with composite/carbon-fiber material that would make your heart sink if you crashed it. Your average hobbyist didn’t have a spare $20K to $30K laying around to invest in a toy of this caliber. But today, inexpensive consumer drones can be used for recording high-definition aerial video, light shows, obstacle course racing, and even drone drop deliveries of small items.

Disclaimer: This article is intended to be a brief overview of dropping items from aerial drones, and not a comprehensive guide to drone use. Check your local laws before flying a drone or attempting to carry objects with your drone. Always fly safely and responsibly.

The Evolution of Consumer Drones As the years passed, Chinese manufacturers stepped up to pump out smaller drones made from affordable plastic components. These weren’t easy to fly, and replacement parts weren’t easy to find. But the popularity of drones continued to grow, and in 2013, DJI released the Phantom drone to appeal to the U.S. and UK markets. As of 2020, DJI has provided over 77 percent of the U.S. market share for consumer drones.

Thanks to reductions in cost and improvements to ease of use, hobby drones have become very popular. These devices are now being recognized for their capability to do more than capture amazing aerial video footage. Much like hot-rodders learned to push the limits of their vehicles by adding headers and high-flow carburetors, the drone market is experiencing a renaissance of tuning and third-party mods. Swarms of drones can put on a “firework style” lightshow. Drones can fly through obstacle courses with precision navigation and incredible speed. The days of aerial photography for fun have quickly evolved to users putting their drones to the test. Given their versatility, low cost, and ease of use, it should come as no surprise that consumer drones have begun showing up in wars and conflicts around the world. Military and paramilitary groups have been weaponizing these devices for many years — they’re used for stealthy reconnaissance from high above the battlefield and have even been equipped with improvised explosive devices to directly attack enemy positions. Drones can also be used to deliver important resources, such as medicine or a radio, to allies in heavily contested areas. Powerful motors and extended battery life have made the DJI Mavic Air2S a popular choice for applications such as these. Even if you’re not currently involved in asymmetric warfare, knowing how to deliver payloads with your drone can be a valuable skill. Read on as we explain the basics of drone drops. How to Set Up Your Drone Drop

The DJI Mavic Air2S has a remote function button that’ll trigger a “landing light.” There are no internal modifications or special auxiliary motors to hardwire into the drone’s system — it’s essentially pre-wired for a remote “trigger.” Sourcing a relatively cheap “light sensor” switch motor will cost under $60 and will latch onto your drone with the included mounting bracket.

Once installed, the switch will open and close, unlatching whatever string/attachment you connect to the switch. Once you’ve tested the light function with your remote before flight, you’ll be ready to drop anything your drone can carry. Above: I purchased a Hanatora Payload Airdrop kit for $37 on Amazon. The kit clamps onto the body of the drone. Foot extensions for each arm are included and can help with clearance for takeoff and landing. Above: Here's a photo of the underside of the drone with the drop kit installed. Items can be attached to the retractable metal rod via a loop of cord or a key ring. 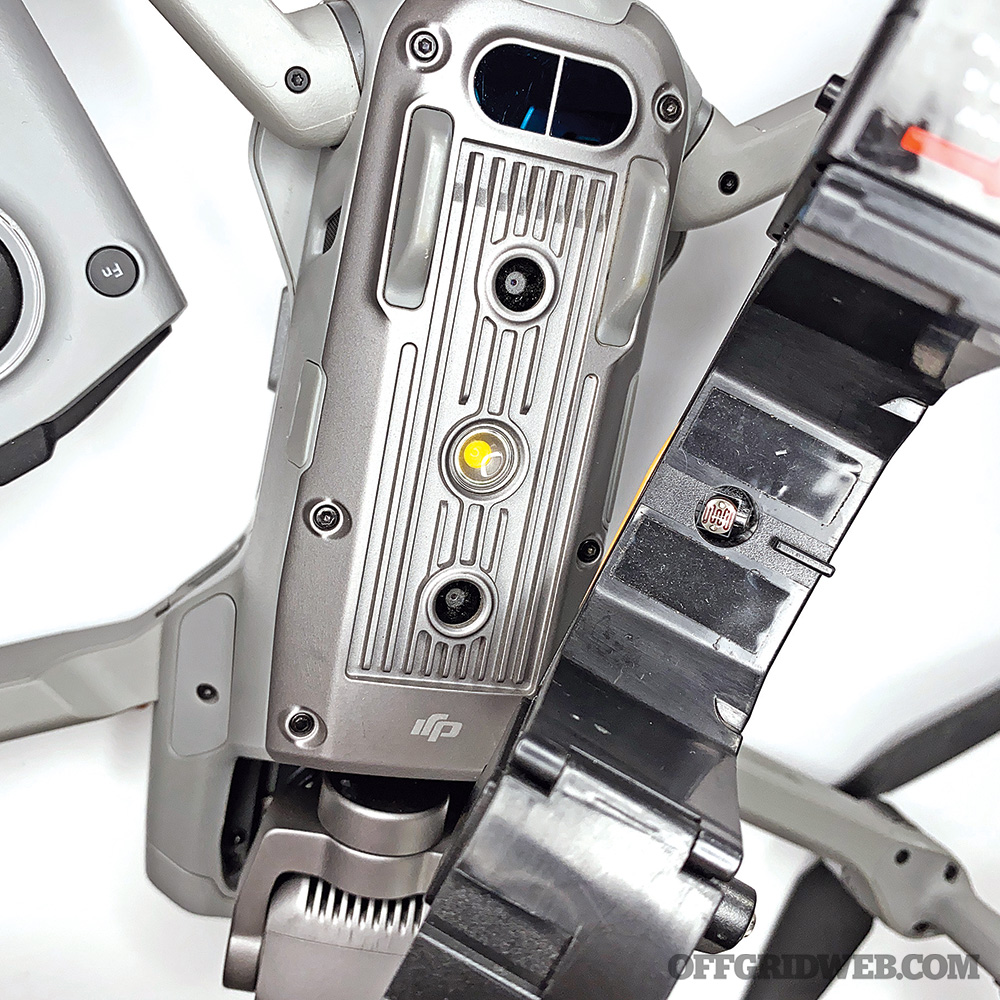 Above: To activate the drop function, simply press the FN button on the controller to activate the drone's built-in “Landing Light.” This will trigger a light sensor in the drop kit that opens and closes the attachment rod. Above: This TinyTx ThrowTx device runs on a single CR2032 battery, and can provide approximately 30 hours of continuous audio surveillance to any UHF receiver (e.g. a handheld ham radio) within a 500-meter radius. 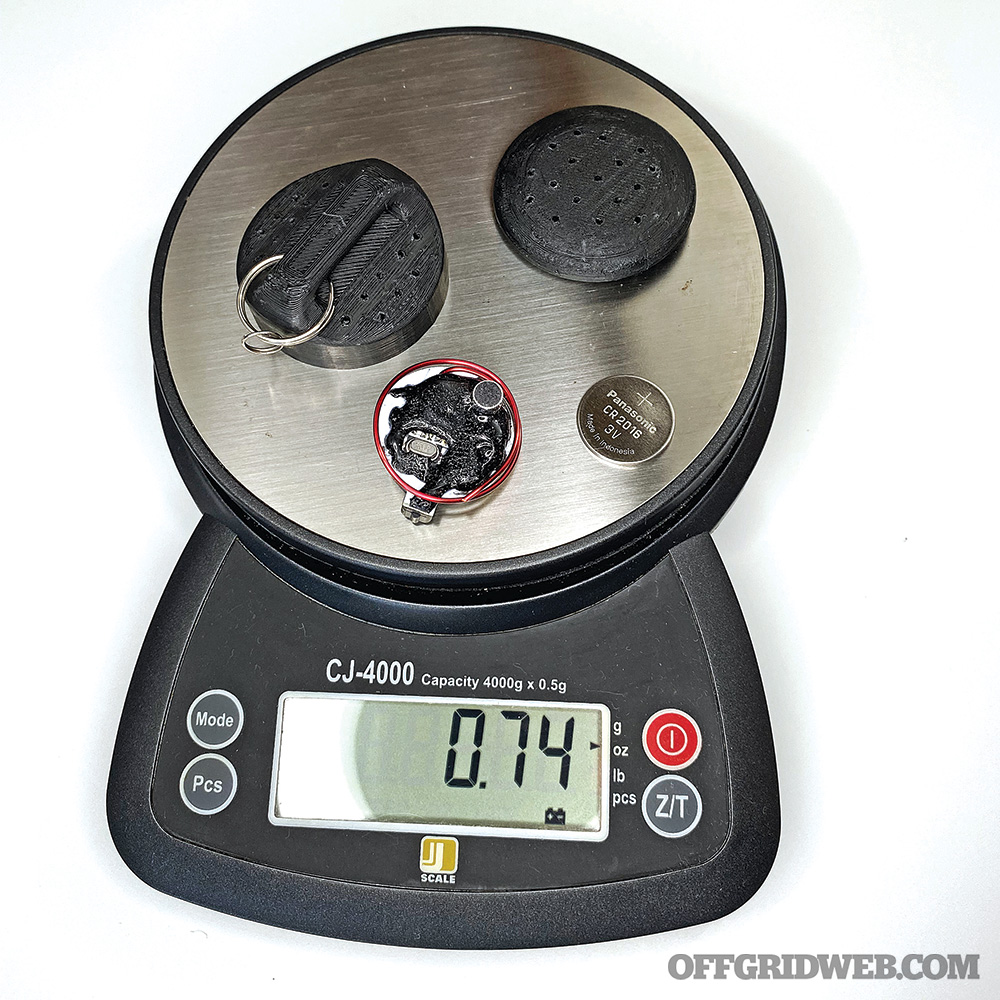 Above: Originally, the ThrowTx was designed with a spherical housing that can be thrown or rolled into position, but this didn’t provide any way to attach it to a drone. I used a 3D printer to create a new housing with a keyring attachment point. The entire setup weighs less than an ounce.

Even if your drone doesn’t have a plug-and-play accessory switch, there are still low-tech options. In an OFFGRIDweb-exclusive article on weaponized drones, we showed how militants in Central African Republic used a drone to carry a hand grenade inside a cut-open water jug. When the drone tilted forward, the grenade rolled out of the jug, and a string attached to the drone pulled the pin. Although this makeshift setup would be incredibly dangerous to everyone in the vicinity, it’s a reminder that improvised drop methods can be cobbled together for almost any drone.

What Can a Drone Carry?

Various weight tests have been performed on many drones. Typically, a DJI Mavic Air 2S can carry roughly 16 ounces at most. Factor wind and battery life into the equation before you take off to deliver that package. I like to stay under 8 ounces for payload weight, since that still allows safe maneuverability and flight distance. Remember that your drone needs enough battery life to make it back from its destination — the last thing you want is an emergency landing in an area you can’t easily access.

Above: This drone can carry about 16 ounces of payload, but 8 ounces is a safer limit to maximize stability and range. That’s more than enough for a goTenna Mesh network device, a solid-state drive full of terabytes of data, or a Baofeng handheld radio.

For reference, here’s a quick list of some possible payloads we weighed: 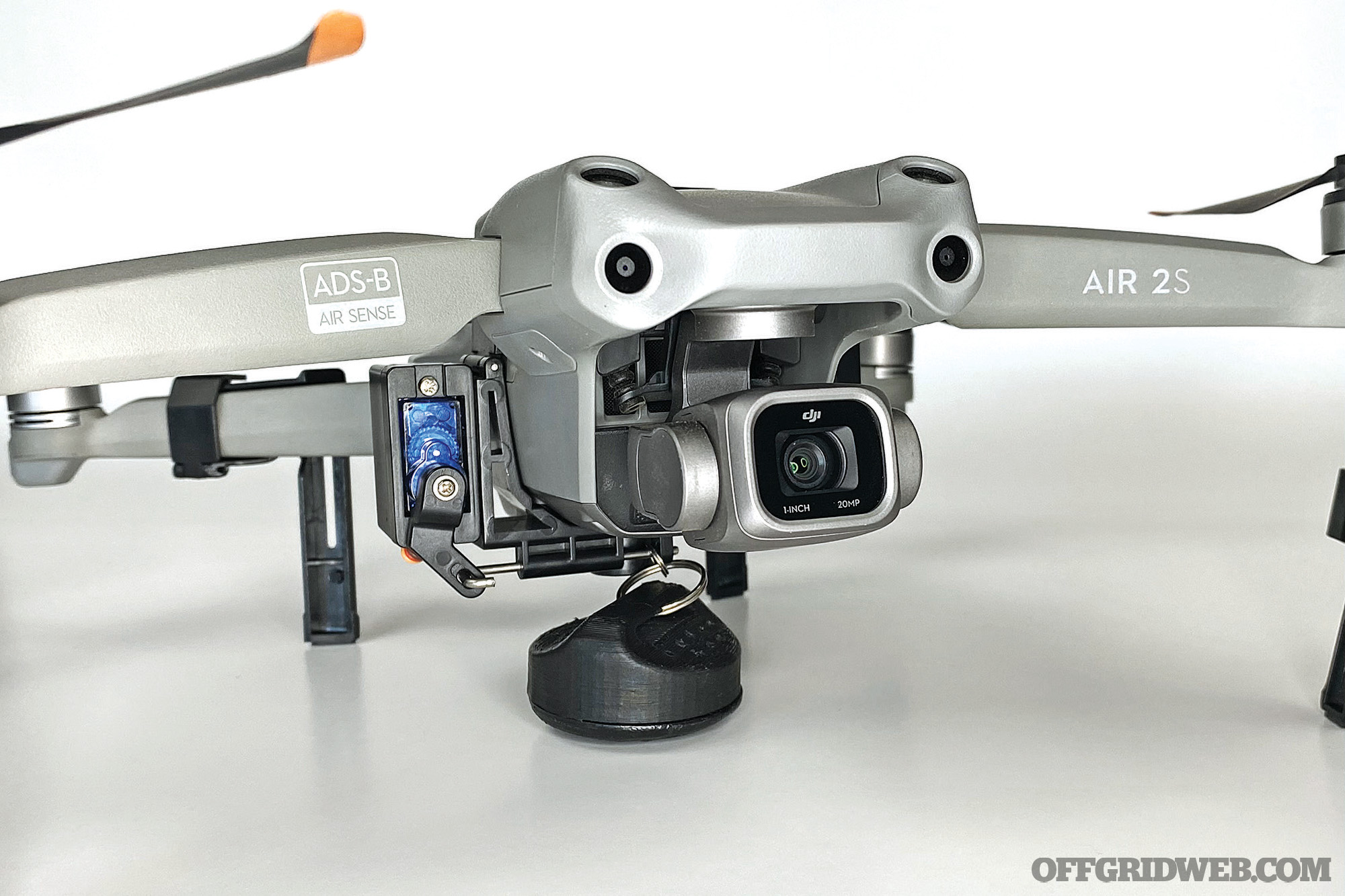 Above: Here’s what the ThrowTX housing looks like attached to the drop kit. The foot extensions allow the drone to take off and land more easily. Above: After a test flight, we saw almost no impact to drone maneuverability and stability with our drop kit and payload. Lightweight items shouldn’t affect range much, either.

Deciding what you want to carry and what can withstand the impact from the drop will be an evolving goal. 3D printed enclosures partnered with soft foam work well and are scalable and light; I’d strongly recommend foam enclosures for anything that’s fragile or needs to be dropped from more than two stories of elevation. Kite strings and creative knots can secure anything that doesn’t need protection from the drop.

Thinking of what to drop? The possibilities are endless. If your mind races immediately to Molotov cocktails or kilos of white powdery substances, you’ll likely need a much larger drone to fly in a country where that sort of lifestyle is accepted. Maybe you want to play extreme fetch with Fido, or have an over-the-top gender reveal party. But this is RECOIL OFFGRID — we want to focus on staying prepared and alive. Above: For less than $40, the Hanatora Payload Airdrop kit includes a mounting bracket with sensor and drop motor, as well as foot extensions.

Search-and-rescue drones can find a missing hiker, but imagine having the ability to drop a radio so you can communicate, not just hover over the individual. Keeping them intact and working can involve trial and error. A small affordable walkie-talkie weighs a lot less than a clunky CB/ham radio. If you have good cell service in the area, a cell phone would work great. If not, consider a GPS beacon or satellite phone. Find ways to strip items down to bare essentials and protect them with lightweight soft padding.

Surveillance and countersurveillance is another area where drones excel. Dropping listening or jamming devices isn’t something I will explain in great detail, but specialists such as TinyTransmitters offer some surprisingly affordable and capable options. It’s also possible to wirelessly collect information by attaching a radio receiver to the top of the drone using Velcro, and dangling an antenna underneath it. In the event that you need to make a hasty getaway, your drone drop system can be used to ditch the antenna at the press of a button. Similarly, your drone can act as a radio repeater to aid in broadcasting a stronger signal. Above: In situations where there’s no internet access or networks are heavily surveilled, your drone can serve as a modern-day carrier pigeon. Simply load files onto a portable SSD and deliver it to the recipient. Encryption can be added as a safeguard against interception.

Dropping glow sticks or other markers can help an individual or team navigate into or out of a specific area. Technology can enable us to mimic what we see in military exercises, with marker colors representing different objectives or statuses. Maps and other navigational aids could also be delivered via drone.

Whether you believe Alberto Santos-Dumont or the Wright Brothers were first to fly, we’ve had a lot of pioneers in the field, with every contribution advancing the sky to become our futuristic superhighway. How you navigate the sky and what cargo you choose to carry is up to you.

This article was written by SoCal Offgrid, an individual not to be confused with the name of this magazine. He is a full-time electrical contractor who previously shared his urban communications kit Bag Drop in Issue 45. He can be found on Instagram at @socal_offgrid.

The next phase of our 5th Gen 4Runner build includes a Westcott Designs roof rack, Baja Designs lights, and an sPOD...