Written by Patrick McCarthy on January 28, 2022

In the early days of aviation, fighter pilots navigated with a magnetic compass and aimed their guns with iron sights. Today, that's almost unthinkable. Modern pilots are able to use heads-up displays and sensors to maximize their combat capabilities and cut out guesswork — imagine if the same could be done for shooters on terra firma. At SHOT Show 2022, we were able to take our first look at a new suite of technology that's taking on this challenge in the commercial AR-15 market: the Magpul x Maztech X4 smart rifle system.

What We Know About the Magpul x Maztech X4 System 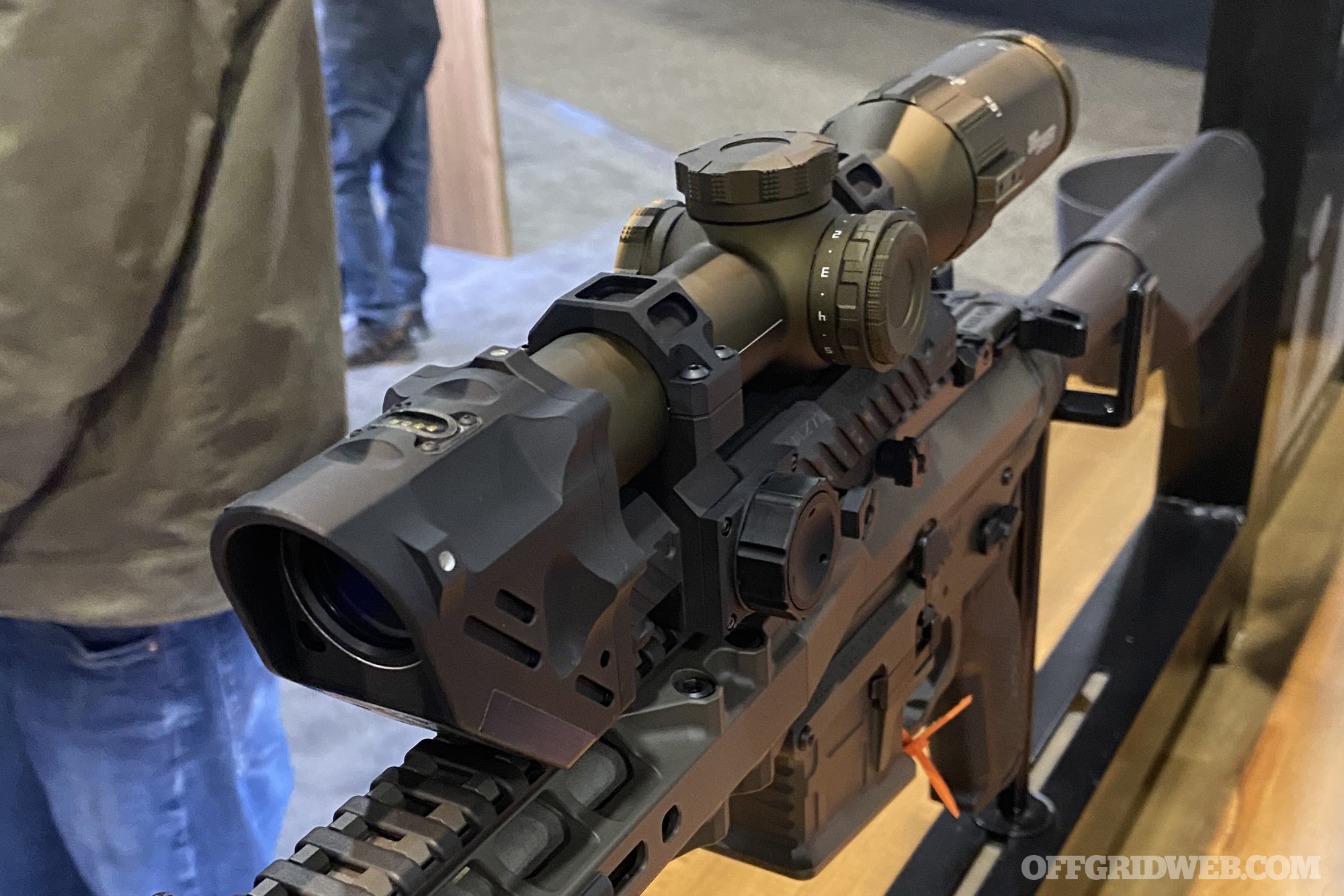 One of the prototypes of the Maztech X4 FCS on display at SHOT Show 2022.

This X4 “sensor fusion” system will consist of many modular elements, but the core is the Maztech X4 FCS (Fire Control System). It's essentially a scope mount that converts a standard 30mm or 34mm low-power variable optic (LPVO) into a smart optic with a heads-up display. If you already own an LPVO, you can simply drop it into the X4 FCS mount to enhance its capabilities. This display collects data from other components in the Magpul x Maztech X4 family. With an X4 LRF laser rangefinder module, it is capable of showing range to a target and indicating the recommended hold-over based on ballistic data. We're told you'll be able to input custom rifle and ammo profiles into the unit via a USB port, and will even be able to adjust data on the fly using a control knob on the side of the X4 FCS unit. If you equip your rifle with Magpul's X4 PMAG and grip module, it will also provide an electronic round counter to track how many rounds are remaining in the weapon, and how many are remaining elsewhere in your loadout (e.g. on your belt or chest rig). Representatives at the company's SHOT Show booth demonstrated this functionality using mags filled with dummy rounds. The round count data can be displayed on a cylindrical unit that attaches to a picatinny rail (pictured above), can be viewed through the FCS scope overlay, or can even be communicated wirelessly to other members of your group.

Magpul's promotional video reiterates that the X4 system is not just intended for multi-million-dollar government contracts — it will be commercially available to the public, and “its components won't have the high prices normally associated with advanced technologies.” At this stage, no exact pricing has been given. Maztech says the X4 FCS will be available in the fourth quarter of 2022; release dates for the other components are unknown at this time.

Too Good to be True?

On one hand, we're excited about the prospect of using technology to improve shooting accuracy and efficiency. Being able to glance through the reticle and know the exact range and corresponding hold-over for a target would be very helpful, and we've always wanted round counters since we saw them on the M41A pulse rifles in Alien.

On the other hand, there are still a lot of questions at this early stage of the Magpul x Magtech X4 system's development — these include reliability, durability, battery life, ease of use in the field, and cost. We weren't reassured by the fact that we couldn't even touch the FCS units on display at SHOT Show (we tried and were reprimanded by a booth worker, who said they're still fragile prototypes). Task & Purpose voiced some similar concerns in their writeup about the system.

Hopefully the development process continues and bears commercially-viable results, because we'll be disappointed if this turns out to be vaporware.