We Checked the Effectiveness and Durability of Blades Made from G10, Ceramic, Carbon Fiber, and More

Nonmetallic knives aren’t a new phenomenon. Man’s earliest weapons consisted of pointed staves and sharpened stone, which were quite effective for hunting, skinning, carving, and fighting. Today, nonmetallic weapons have benefitted greatly from durable and lightweight modern materials, making them more accessible and easier to carry and conceal.

Human trafficking is a thriving criminal enterprise in the United States and abroad, making forceful abduction one of the many possible scenarios the modern prepper needs to be ready for. Escaping unlawful custody requires preplanning, training, and the ability to conceal a means of escape and defense. In many cases, discreet, nonmetallic tools may be the only thing one can get past an initial security sweep conducted by a criminal element during this type of incident.

In the aftermath of events like Sept. 11, where box cutters were used to hijack and weaponize commercial aircraft, there has been a legitimate concern over edged weapons that can be smuggled past security checkpoints. Having recognized that fact, we want to be clear that our objective here isn’t to encourage our readers to break the law, but to educate you about the real capabilities of nonmetallic edged weapons. Remember that the bad guys won’t hesitate to disregard laws and carry out attacks in so-called “weapon-free” zones, so it’s wise to be ready to defend yourself, regardless of the time and place. 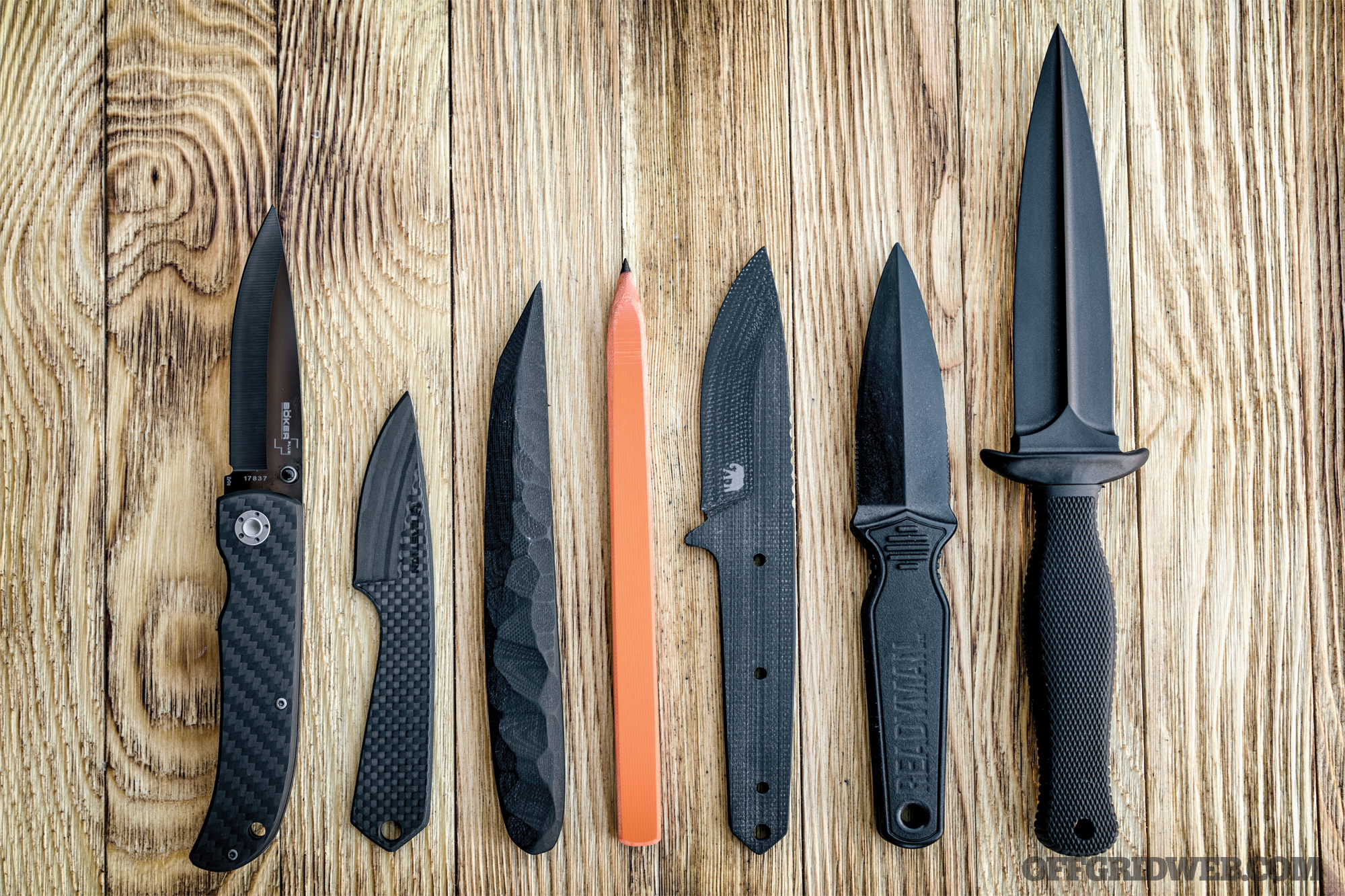 To that end, we acquired samples of a few popular nonmetallic edged weapon designs composed of various materials, and established an informal yet realistic testing protocol to measure their performance in several key areas. For the metal signature test, we used a Super Omni metal detecting wand to scan the test samples. Some of the sheaths contained metal components, so for those samples that included a sheath, we tested them with and without the sheath against the metal detector.

For the cut and puncture testing, we used a large pork rump to provide an organic medium that would closely simulate the bare flesh of a human being. All tools were first tested using a slashing cut against the pork rump covered with a white cotton undershirt, then stabbed into the rump through the T-shirt. The same two tests were again conducted against the meat with the T-shirt removed. A pressure cut, where the edge of the blade was first pressed against the meat then drawn through, was also performed with all the samples that had a cutting edge. Finally, a stab into the meat followed by a withdrawal cut was attempted with each sample.

We understand there are limitations to nonmetallic edged weapons, so to keep the testing within a reasonable level of expectations, our durability testing involved targeting the bone inside the meat, twisting the blade while it was inside, and removing it with a levering action from a 90-degree angle to a 0-degree angle. Our ceramic test blade was the Boker Plus Anti-Grav ceramic folder. The Anti-Grav, which is filled with metal screws, a metal pivot pin, and a pocket clip, failed the metal signature test faster than we could open it, making it a poor choice as a deep concealment knife. Conversely, it was the top performer in the other two categories. The razor-sharp blade cut through the T-shirt and deep into the flesh of our test subject on the first slash. It also penetrated cleanly through the T-shirt and through the 7-inch-thick hunk of meat. On the pressure cut test, the blade cut more than halfway through the meat, and almost severed it completely in half during the stab and cutaway. The ceramic material held up well against the bone, but the very tip was broken off when it hit the edge of the metal table holding the target in place during one of the test cuts. Our G10 edged weapon samples consisted of the Greg Moffatt Knives MG1, the GLG Knifeworks G10 Warcry, and the GLG Knifeworks G10 Lumber Crayon. Of the three samples, only one, the MG1, had a cutting edge. The MG1 was surprisingly sharp for G10 and was able to cut through the T-shirt and about an inch into the meat. It performed even better against the bare meat, leaving a substantially deep laceration. The results were equally impressive with the pressure cut.

The blade geometry was less conducive to penetration and was unable to penetrate the T-shirt when stabbed into the meat. Against the bare flesh, it was able to penetrate deep enough to hit the bone, but suffered delamination damage (separation of the bonded layers) at the tip.

The Warcry and Lumber Crayon were stellar performers in the stabbing portions of the testing, both penetrating deeply, even when the T-shirt was present. These two were the only tools tested that didn’t suffer some type of damage to the tip when hitting bone or the hard backstop behind the meat.

All three G10 samples were resilient against the lateral stress generated in the durability test. They also passed undetected under the metal wand, proving that G10 is a good choice for nonpermissive environments. The metal-free Kydex MG1 sheath was the only sheath that passed the metal signature test, making the Moffatt MG1 a front runner in overall performance. The compact Bastion Carbon Fiber Neck Knife served as our carbon-fiber test knife. Out of the box, the Bastion CF was second only to the ceramic in sharpness and we expected it to be a performer.

Against the bare meat, the CF cut cleanly and deeply. The blade’s shape allowed it to penetrate easily through the T-shirt and through the meat all the way to the bone, but the tip suffered a slight amount of damage from the impact.

The major downside of carbon fiber is its metal signature. Carbon graphite strands form the base of carbon-fiber material, giving it enough magnetic properties to trigger a metal detector. In the case of the Bastion, the Kydex sheath, minus the steel neck chain, was the only part of the rig that didn’t have a metal signature.

In the glass-filled nylon category was the ReadyMan CIA Letter Opener. The Letter Opener was unable to cut through the clothing at all, but had no trouble lacerating the bare meat with both the slash and pressure cut. The thin, double-edged dagger design was able to penetrate the meat and the clothing when thrust into the target. The small serrations on the rear portions of the blade made for a nasty wound, ripping the cotton material and tearing the meat prior to leaving a deep laceration during the cutaway.

The glass-filled nylon held up against the lateral stress of the durability test, however, the blade tip rolled a little when it hit the backstop during the puncture test. It also passed undetected by the metal wand in the metal signature test. The Cold Steel FGX Boot Blade was used for our Griv-Ex sample. The FGX may have been the most surprising performer. At first glance, the FGX looks more like a nonlethal training knife than a serious defensive tool, but it yielded some shocking results.

The metal ring through the lanyard hole gave this sample a metal signature. This is the manufacturer’s remedy to keep it legal where such signature is required by law on nonmetallic knives. We removed the ring to keep it consistent with our testing parameters. After doing so, the knife passed the metal signature test.

The FGX was ineffective at cutting through either the T-shirt covered meat or the bare meat when we used the slashing cut. It also failed to pierce the T-shirt during the puncture test, but it penetrated the meat to the guard and took the shirt with it.

What really surprised us was during the pressure cut, the FGX cut deeper and left a larger wound channel than most of the other blades. This was completely unexpected given the complete lack of any noticeable edge sharpness. Like every other edged tool we tested, the FGX experienced damage to the tip when it hit the backstop. The tip bent to a 90-degree angle, and even though it could be straightened, it appeared to be significantly weakened.

For the most part, nonmetallic edged weapons are essentially disposable tools intended for single use. You’re probably not going to pull out your CIA Letter Opener to cut your steak during dinner. It’s a last-ditch defensive option, not designed for everyday use. However, there are some basic things that can be done to sharpen or repair these tools should they become damaged during your daily carry.

Ceramic is a common cutlery material, making it the exception to the single-use rule, however it does behave quite differently than steel and requires special techniques to maintain. Ceramic is almost twice as hard as steel, so many of the abrasives used to sharpen steel knives will not work on ceramic. Diamond stones are the only viable option for sharpening ceramic.
While extremely hard, ceramic is also very brittle and doesn’t do well against lateral stress. When sharpening ceramic, it’s important to keep pressure against the opposite side of the blade with the fingers to keep the blade from snapping in half. Above: Every nonmetallic knife sample we tested suffered some form of damage to the tip after making contact with bone or another hard surface.

Carbon fiber and G10 can be sharpened and reshaped using fine grit sandpaper or an emery board like a sharpening stone. We were able to sharpen and repair the damaged tips of both materials using the Work Sharp system at a low speed with a fine grit belt.

As for Griv-Ex and Glass-Filled Nylon, you’re stuck with what you get from the factory and might as well throw them in the trash if they’re dulled or damaged. One might be able to restore an edge by shaving away material with a knife, but using any form of traditional sharpening is futile.

Based on our informal testing, all the tools and materials we tested proved to be viable nonmetallic weapon options, each having their strengths and weaknesses.

The Greg Moffatt G10 MG1 was the only sample to pass every portion of every test, from beating the metal detector to cutting through clothing and flesh. With the added benefit of easy maintenance, G10 is one of the best choices for a last-ditch edged weapon in a nonpermissive environment. A fixed blade ceramic knife without all the metal accoutrements contained in the Anti-Grav would also rank pretty high on our list.