Shooting and gunfighting aren’t the same thing. You may be able to nail the bull’s-eye every time at an indoor range or competition stage, and that’s a good sign that your fundamentals are solid. However, it doesn’t necessarily mean you’re prepared for the enormous physiological, mental, and environmental challenges of a real-world defensive situation. Ideally, you should spend time honing both your technical shooting skills and your defensive gunfighting skills. I recently attended back-to-back Fieldcraft Survival Gunfighter Pistol and Gunfighter Carbine classes that addressed both of these important elements.

One unique aspect to this class was the pair of instructors who taught it — Hunter Constantine, a sponsored competition shooter, and Lucas Aguilar, a former U.S. Army SRT member with experience working in protective services. These two opposing skillsets complemented each other; Constantine focused on shooting technique and efficiency, while Aguilar focused on defensive tactics and real-world applications. Between the two, students got a balance of perspectives related to shooting and gunfighting. Above: Instructor Hunter Constantine shows how to index a magazine for more consistent reloads.

The first day of this two-day session covered Fieldcraft’s Gunfighter Pistol 1 curriculum. We began by checking fundamental marksmanship — the foundation of all shooting skills — with a “cold” drill: one precise shot at 25 yards, one at 10 yards, two at 7 yards, and three at 5 yards. This shot group showed what we were capable of on demand without a warm-up. Above: We ran several drills working around cover, from both standing and kneeling positions.

From there, we discussed building a “master grip” (both hands clamped firmly around the gun like a nutcracker), working the trigger (“nice and smooth like scooping peanut butter from a jar”), and finding a sight picture (bring the gun up to your eye line, not vice versa). Given the emphasis on gunfighting, we quickly moved into multi-shot cadence drills, reloads, and transitions — both “soft” (smooth and deliberate) and “hard” (urgent). 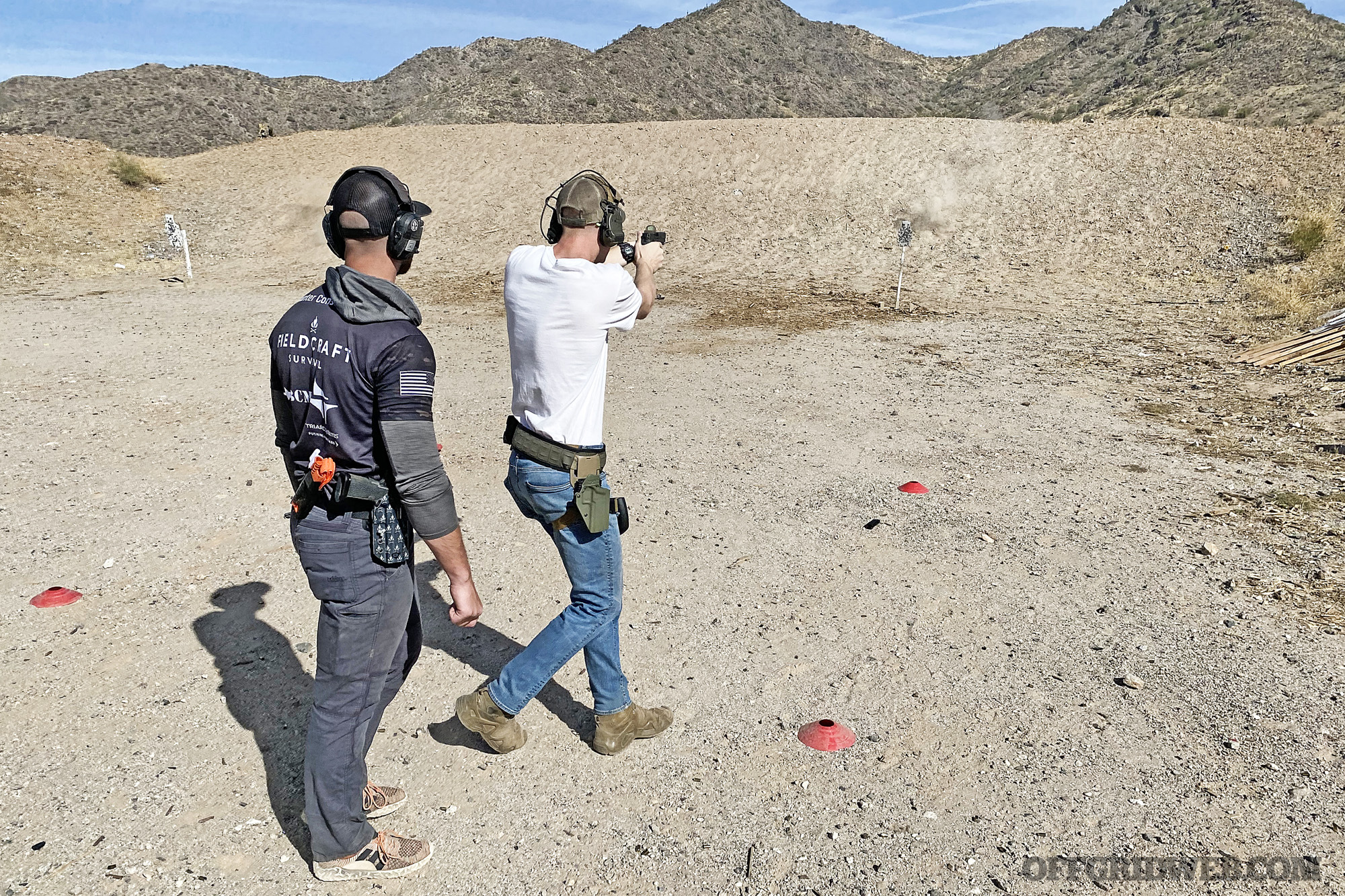 Above: Walking around the perimeter of a box is easy, but when you're shooting and reloading at the same time, it quickly exposes any flaws in your fundamentals.

As students became more comfortable with these fundamental shooting elements, we began combining them with left/right and forward/backward movement commands, since getting “off the X” is an absolutely essential part of surviving any gunfight. Additionally, we learned to work around cover while standing and kneeling. It’s crucial to raise the gun to a ready position before peeking out; for kneeling shots, it’s recommended to keep the outer knee up to reduce the risk of losing balance and falling forward. Movement was added in to simulate running between pieces of cover. As a rule of thumb, the time it takes for you to say “I’m up, they see me, I’m down” is the amount of time you can remain exposed without becoming an easy target. Above: Constantine demonstrates how to maximize stability while shooting from a kneeling position.

Day two, Gunfighter Carbine 1, translated many of these same skills and drills to long-gun applications. Slings were discussed, and we practiced moving our arms through them to switch between front, around-the-neck, and behind-the-back positions. We also practiced bringing the gun up from low ready and pressing it out from the waistline or buttstock-over-shoulder “short stock” position (common for room-clearing work in cramped areas). Above: Aguilar shows a student how to lay his carbine flat on a barricade with the ejection port facing upwards. This allows him to keep his head lower while looking through the optic, but may require a lateral hold to account for the optic's height over bore.

Students worked up to cover, movement, and target transition drills, this time also incorporating positions such as seated, supine, and “brokeback prone” (kneeling with face down to shoot under an obstacle, such as a vehicle). We also learned to lay our carbines flat on top of cover, ejection port side up, in order to shoot while minimizing our visibility and exposure to incoming rounds. Above: During this class, I used my 11.5″ suppressed SBR and ported Glock 45. The former is my “bump in the night” bedside gun, and the latter is what I carry on a daily basis, so this class provided a great opportunity to prove that they're both weapons I can rely on.

Each day concluded with a timed competition stage to quantify students’ progress in each of the key skills. I was relatively pleased with my performance and managed to take the top shooter position during the pistol competition — a testament to the fact that two years of frequent training hasn’t been a waste of time. For more information on Fieldcraft Survival classes, go to fieldcraftsurvival.com/training.

My 5.11 Tactical Responder ALS medical bag travels with me everywhere my vehicle goes, and contains a variety of first...