In warfare, a stationary target is a vulnerable target. Firing any weapon from a static position for an extended period of time can allow an enemy to pinpoint your location. Conversely, repositioning frequently makes it harder for an enemy to launch an effective counterattack. The Scorpion mobile mortar system from Global Military Products is designed to address this need, achieving an effective balance between mobility and lethality. Above: An experienced two-man team can skid to a stop and fire the first round downrange in just 45 seconds. Eleven additional rounds can be fired within the next 60 seconds.

The Scorpion system was originally developed by a family-owned business in Spain called NTGS (New Technologies Global Systems). NTGS is the manufacturer of the Scorpion; Global Military Products, a division of Global Ordnance, partnered with the company to adapt and distribute it internationally. Once you see how the Scorpion works, it becomes clear that its name isn't just meant to sound imposing — it's a direct reference to the predatory insect's anatomy. Much like the articulation of a scorpion’s stinger, the mortar system swings out of the back of the truck in an arc until it reaches its final position with its baseplate pressed against the ground. This deployment takes roughly 30 seconds and can be initiated as soon as the truck comes to a stop. Within another 15 seconds, a skilled two-man crew can fire the first 81mm or 120mm mortar round downrange (depending on the interchangeable tube installed). In the first minute, the Scorpion is capable of firing 12 rounds; rate of fire slows to 4 rounds per minute after that. More importantly, the Scorpion can be stowed and driven away a mere 21 seconds after the last shot is fired.

Above: After firing a shot, it only takes 21 seconds before the Scorpion can drive away. In many cases, the truck can leave the area before the round impacts its target.

The system is much more than a simple deployable mortar tube. It features a weather station that unfolds as part of the deployment to improve accuracy. The high-tech Fire Control System uses double GPS units to determine the truck’s location and orientation, compares that location to assigned targets, and calculates the ballistic trajectory of multiple munition types. There’s also an electronics cabinet that houses control systems for the elevation and direction of the gun, communication systems, and an independent battery. On the opposite side of the Scorpion’s frame, a pneumatic cabinet contains the compressor, storage tanks, and solenoid valves that control the folding and unfolding operation. The Fire Control System can be operated from a computer screen and keyboard inside the truck’s cab, removing the operator from the blast radius of the mortar, or it can be controlled from similar control panels outside the truck. Above: A large computer screen and keyboard in the cab allows the passenger to operate the Fire Control System, which automatically factors in GPS, ballistics, and weather data to electronically aim the mortar.

The baseplate of the Scorpion system rests against the ground, distributing recoil so it doesn’t place strain on the truck’s chassis and suspension. Once the system is deployed, the tube still has a 120-degree arc of movement, so it can be aimed precisely without requiring the driver to park at a precise angle. Onboard ammunition cabinets can carry up to 72 rounds of 81mm or 40 rounds of 120mm ammo. Maximum range for each of these munitions is 6,500 meters and 8,000 meters, respectively, with sub-2-mil accuracy. Above: Ammo tubes on each side of the truck offer protected storage for 81mm or 120mm mortar ammunition.

As for the truck that carries the Scorpion mortar system, Global Military Products says it can be adapted to any wheeled or tracked vehicle over 1.5 tons with no structural reinforcement required. Early prototypes were based on the Land Rover Defender and URO VAMTAC, a Spanish military vehicle comparable to the American Humvee. The truck pictured here is a 2021 Toyota Land Cruiser VDJ79 with a turbodiesel V-8 and five-speed manual transmission. It has no modifications aside from removal of the bed to make room for the Scorpion. With a combined weight of 7,165 pounds (not including ammunition), it’s light enough to be carried by helicopters and other aircraft. Above: Rather than digging into the ground, the Scorpion’s baseplate presses firmly against it. This distributes recoil without impeding the truck’s ability to pack up and leave quickly.

Global Military Products believes that the Scorpion offers a huge advantage over the legacy mortar systems that are currently in use by the U.S. Army and Marines, which it says have been “essentially unchanged since WWII.” Although it remains to be determined whether our military will adopt this system, it’s easy to see how its ability to park, fire several mortar rounds, and move to a new location in under two minutes could be valuable on the battlefield. 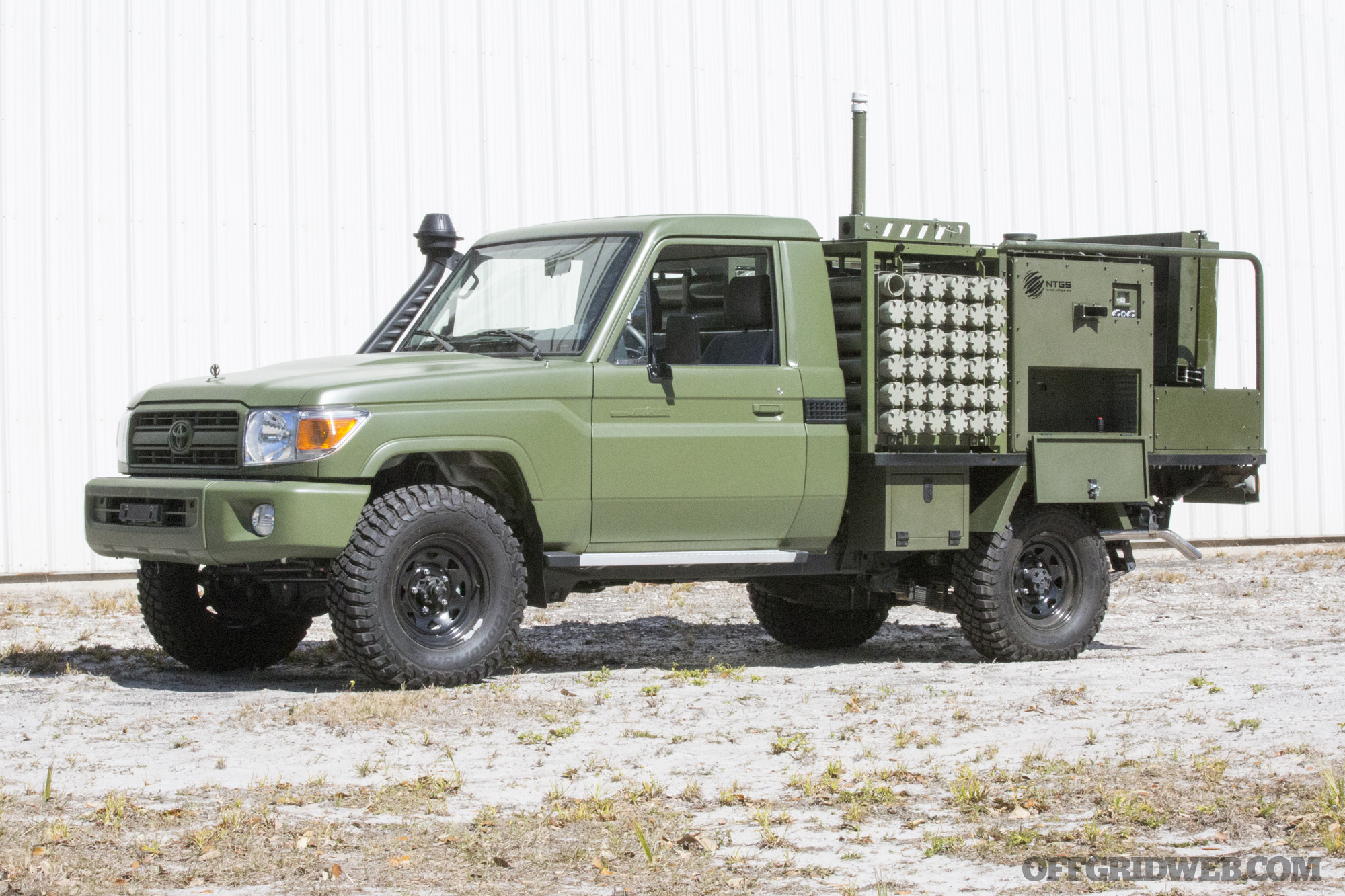 Base Vehicle: 2021 Toyota Land Cruiser (can be adapted to any vehicle greater than 1.5 tons)