The CTF-1 Features a White Light, IR Laser, and IR Illuminator in a Compact and Inexpensive Package

If you've ever tried wearing modern night vision goggles, you'll understand why they're often described as a superpower. Although it's not quite as impressive as flying like a speeding bullet or lifting a semi truck, the ability to see clearly, identify targets, and shoot accurately in a nearly-pitch-black environment feels like an unfair advantage. However, like most superpowers, night vision comes with some inherent drawbacks. It requires a substantial amount of gear — for starters, you'll need a helmet, shroud, mount, and goggles or a monocular. The cost for these items adds up quickly and can easily exceed $5,000 or $10,000, and that's before you consider common accessories like helmet-mounted lights, strobes, battery packs, and ear protection. Refer to OFFGRID Issue 43 for several in-depth articles explaining the basics of helmets and night vision systems.

Once you've done your research and chosen a night vision setup, the next item you'll need is a weapon-mounted infrared (IR) laser and illuminator.

The Challenges of Traditional Lights, Lasers, and Illuminators Above: OFFGRID editor Tom Marshall wrote about two rifles he configured with traditional light/laser/illuminator setups. The first, seen here, features a Steiner DBAL-I2 IR laser flanked by a SureFire Scout light with Vampire head that can switch between IR and white light settings.

Since IR light isn't visible to the naked eye, an IR laser and illuminator acts as a light source and aiming point that only you (and anyone else in the area wearing NVGs) can see. Typically, this will be paired with a separate weapon-mounted white light, which can be used in low-light and transitional environments where night vision isn't required. If you're thinking that this sounds expensive, you're not wrong. It's easy to spend another $1,500 or more on a multi-function IR laser/illuminator unit such as a Steiner DBAL or L3-Harris ATPIAL-C, plus $300 or more on a quality white light. Above: Tom Marshall's second rifle features a Holosun IR laser/illuminator and a white light that incorporates parts from Cloud Defensive and Valhalla Tactical. A pair of remote switches allow activation of each device.

As if that's not enough, you'll still have to figure out how to mount your white light and IR laser/illuminator onto your rifle. Depending on each device's positioning and how much rail space you have to work with, you may need to add remote switches and route their wires carefully to keep your setup organized. That's another rabbit hole full of multi-function switches, mounting adapters, and wire-routing accessories that add to the total cost of your setup.

Once you've spent the time and money to configure a rifle with a traditional light/laser/illuminator setup, the results are certainly rewarding. But for newcomers to the world of night vision, this cost and complexity can be discouraging. It has often left us wondering why there isn't a simpler and more affordable “turn-key” option on the market — Phantom Hill set out to provide exactly that. You probably haven't heard of Phantom Hill — neither had we — but that doesn't mean it's a newcomer to this market. Phantom Hill has spent the last 14 years designing night vision equipment behind the scenes for some of the biggest players in the industry: Ops-Core, Gentex, S&S Precision, Princeton Tec, and Crye Precision, to name a few. Only recently did the company decide to launch its first product under its own brand name.

The Phantom Hill CTF-1 is described as “a simple tool at a fair price that can be put to immediate use without the need for additional components.” The MSRP for this unit is $799, a price that's roughly half that of the multi-function IR laser/illuminators we mentioned earlier, not to mention the extra cost of a separate white light. This caught our attention, so we requested a sample to review shortly after it was released in late 2021. 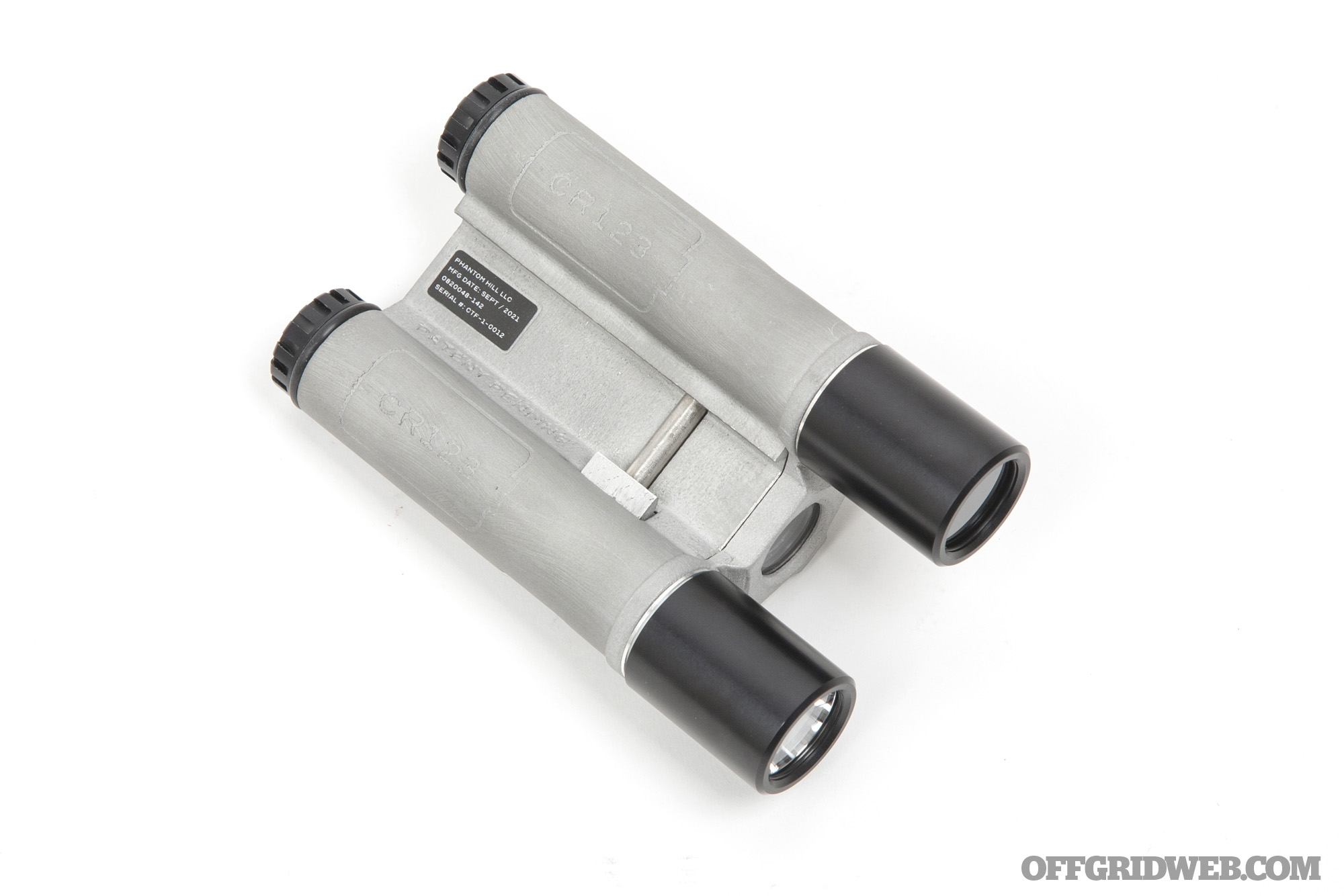 Above: Our sample is marked as serial number 12, indicating just how “hot off the press” it was.

The CTF-1 covers all three of the most important functions — white light, infrared laser, and infrared illuminator — in a single compact unit. Above: We mounted the CTF-1 on this Aero Precision EPC 9mm AR pistol, which will be featured in a separate article soon. It features parts from Arbor Arms, Arisaka Defense, JK Armament, Primary Arms, RISE Armament, Strike Industries. (Photo by Nate Gerhart)

At its core is a metal housing with an unusual-looking raw finish. This characteristic comes from its Direct Metal Laser Sintered (DMLS) aluminum construction. DMLS is a 3D-printing technique that uses a laser to sinter (i.e. heat and condense) metal powder into a solid structure. This technology allowed Phantom Hill to move quickly from a prototype phase to a production-ready design, while avoiding expensive tooling or molds that would drive up production costs. Phantom Hill says the rough sintered finish has a secondary advantage — it reduces the IR reflectivity of the unit, therefore making it less visible to other NV-equipped personnel.

The housing has an integrated Rail Grabber that locks onto a Picatinny rail using a single cross-bolt with a Torx head. We found this mounting system to be very secure. It fit three ARs we tried it on, but we suspect that its tight contours around the top rail may make it incompatible with certain large-diameter handguards. Compatibility with non-AR platforms will be hit or miss at best. The Phantom Hill CTF-1 uses a symmetrical design with a white light on one side and an IR illuminator on the other. The white LED produces 380 lumens of neutral 5700K light and projects it in a soft flood pattern. This is ideal for close-quarters use and room-clearing, since it offers a wide angle of visibility, but it doesn't have the power or throw necessary for long-range shots outdoors. If you've used a Streamlight TLR-7 pistol light, it's comparable to that.

As for the IR illuminator, its beam pattern is essentially the same as the white LED. For those who like the technical details, it features an 850nm wavelength and 1120 mW/sr output; for the rest of us, it appears roughly as bright under a set of NV tubes as the white light looks to the naked eye.

The IR illuminator activates simultaneously with the 850nm IR laser, which is centered directly over the bore of the weapon. We won't say that all IR lasers are created equal, but civilian-legal Class 1 IR lasers are limited by the U.S. Food and Drug Administration (yes, the FDA regulates lasers) to a maximum output less than 0.70mW. As a result, most high-quality civilian-legal IR lasers will be calibrated to just below this limit, and will appear similarly bright under normal use. Activation is simple, with two textured rubber buttons on top of the unit. Each corresponds to its side of the housing; the left “VIS” button activates the white light, and the right “IR” button activates the IR illuminator and IR laser. Both are momentary-only, so you'll need to press and hold to keep the power on.

Unlike many multi-function laser units, the CTF-1 does not have a visible laser built in. This keeps cost and complexity down, but also means you'll only be able to zero the laser under night vision. If both activation buttons are pressed and held for 3 seconds, the unit goes into zeroing mode, and the IR laser turns on continuously. It can then be adjusted via elevation and windage hex screws to match the weapon's point of impact. Thankfully, its centered alignment meant we didn't have to do much adjustment after mounting it on our Aero Precision EPC 9mm AR. The CTF-1 is powered by two CR123 batteries, each sealed behind separate weatherproof caps at the back of the housing. Phantom Hill says the caps have a taper-fit design to make it easier to reinstall them in the dark. Maximum run time is advertised at 3 hours.

Impressions at the Range

We tested the Phantom Hill CTF-1 IR laser and illuminator side-by-side against an AN/PEQ-15, which is the full-power military-spec version of an L3-Harris ATPIAL-C. The full-power PEQ-15 is not available on the civilian market, but a new ATPIAL-C will run you approximately $1,350 — that's $550 more than the CTF-1. It doesn't include a white light, so factor in a few hundred more for that if you don't already have one. Above: This image, taken through an AGM Global Vision white phosphor PVS-14, shows the CTF-1 IR laser and illuminator aimed at a berm approximately 25 yards away. The only ambient lighting was some dim moonlight. With the PEQ-15 on its civilian-legal “low” setting, the lasers appear identical, as we expected. The CTF's illuminator appears far brighter than the PEQ's, but the PEQ's adjustable focus lens produces a much more concentrated beam with a hard edge. At distances closer than 100 yards, we'd give the CTF-1 an advantage, especially in enclosed spaces. Beyond 100 yards, the PEQ's concentrated beam is superior.

With the PEQ-15 on the “high” setting, it definitely outperforms the CTF-1, especially considering its ability to adjust the beam focus for varying distances. The laser is also noticeably brighter, drawing a line that highlights dust particles in the air. However, this output mode is not accessible to commercial ATPIAL-C units. Full-power PEQ-15s are only available to the military and law enforcement agencies, so it's not a fair comparison. We included it as a point of reference, since the CTF-1 still performed surprisingly well in comparison. There are a few drawbacks to the CTF-1. The centered laser makes it impossible to mount backup iron sights in front of the unit or use it on anything with a fixed front sight. The housing is tightly-contoured around the rail, which may make the unit incompatible with certain handguards (e.g. integrally-suppressed guns). The activation buttons are placed close together with identical size and texture, so despite the small ridge between them, it's relatively easy to fat-finger the wrong one. And the lack of a visible laser makes zeroing more of a challenge.

That said, the Phantom Hill CTF-1 offers impressive value at $800, and absolutely fulfills its stated goal of serving as “a simple tool at a fair price that can be put to immediate use.” We found that it works especially well for short weapons with limited handguard real estate, since there's no need for a separate white light, switches, or cable routing. The wide beam pattern for IR and VIS outputs also lends itself to these applications. Whether you're just getting started in the world of night vision or you're looking for a more convenient way to convert one of your ARs for NV use, the CTF-1 is an appealing option, and we're glad to see this market becoming more diverse. We'll leave you with a piece of good news. Phantom Hill has announced a second product called the CTF-2, which will feature an updated 3-button activation system and compatibility with SureFire-style light and illuminator heads (e.g. a SureFire Scout light and a B.E. Meyers KIJI illuminator). Phantom Hill expects to launch this product around mid-2022.

At SHOT Show 2022, we checked out the new Valhalla Tactical ODA...