This article originally appeared in Issue 18 of our magazine.

Warning! The content in this story is provided for illustrative purposes only and not meant to be construed as advice or instruction. Seek a reputable self-defense school first. Any use of the information contained in this article shall be solely at the reader’s risk. This publication and its contributors are not responsible for any potential injuries.

The nature and history of combat is the utilization of weaponry, and victory most often goes to those who train with their weaponry. For an experienced prepper, this same philosophy can and should be applied to self-defense survival situations, so long as the weapon used is a legally appropriate response to the perceived threat.

Unfortunately, gone are the days when we can walk with a sword strapped to our side, and today’s equivalent can’t be carried legally in most parts of the world. Even in places where a firearm can be legally carried concealed or otherwise, many self-defense situations will not require the use of deadly force. So, what are some of the best options for realistic everyday-carry (EDC) weaponry for when SHTF? There is a high likelihood that when you do need a self-defense tool, you’ll be away from your at-home or in-car arsenal and be left with what you have on your person — or what’s immediately in your surroundings. In an ideal world, you should always be carrying a variety of compact self-defense weapons on your person. Concealed-carry handgun, folding knife, and the like — the more options you have, the more prepared you’ll be to deal with what may come. Unfortunately, many places in the United States and abroad don’t allow for the carrying of guns, knives, or even common fist-loaded weapons like brass knuckles.

How can you convert everyday objects into improvised fist-loaded weapons that can be carried universally in even the most nonpermissive environments in the world? Following is a list of five common items that can be realistically carried in an EDC capacity, and some ideas on how they can be used as self-defense weapons. Above: Jared Wihongi, right, parries the punch, then “checks” the attacking arm so he can flank and gain control. From there he can counterstrike.

This item tops my list as one of the most useful and practical items that can be carried as a self-defense weapon. I’ve carried one on my person while traveling throughout many parts of the world. I’ve even kept one in my carry-on luggage for flights in multiple countries on five continents. As a common multi-function tool, I am yet to hear of a place where it’s illegal. The only time mine was even scrutinized was at an airport in China, and they allowed it through because it didn’t have the aggressive strike bezels found on many tactical lights. If you want a flashlight that does have strike bezels, look for one where they are removable. Take them off when going through a security check point, and put them back on afterward.

A tactical light can double as a temporary distraction device in low-light conditions when shone directly in the eyes. Something that cycles straight into a high-strobe mode is ideal, but even a constant beam can momentarily blind or distract an assailant. The window of opportunity gained should be utilized to make an escape, or to counterattack with “hammer fist” strikes. Above: A handheld flashlight has practical functions in addition to being an ideal improvised self-defense weapon. The Strobeforce D-TAC 1000 (from www.theultimate knife.com) is one example of a tactical flashlight that doesn’t look extra overly tactical.

Above: The author shields with his left arm while thrusting with the tactical pen in his right hand. He then hooks his opponent’s arm, applying a lock, while striking the bad guy’s free hand and face.

Another item that I always have on my person is a tactical pen. Like the tactical light, it’s a tool that has common everyday function. Defensively it can be used much like the tactical light, e.g. hammer-fist strikes to limbs, the torso, or the head/neck as necessary. It has a more focused point and as such can do more damage than a tactical light. Because I train often in double-wielded weapon combinations, in sticky situations I’ll often carry my tactical light in my support hand as my distraction and secondary impact weapon, and my pen in my dominant hand as my primary impact weapon. To avoid unnecessary attention, find a tactical pen that is strong enough to take a pounding, but discreet and “non-aggressive” in appearance. Above: A tactical pen is a useful writing implement that can double as a striking tool if SHTF.

Above: Using a magazine as an improvised baton, Jared Wihongi stops the haymaker with a strike to the inside of the arm. He quickly traps the offending arm and follows up with several counters to the face.

Another item I’ll always have on my person while traveling: the most recent editions of RECOIL OFFGRID and RECOIL magazines. If you’re into e-readers, this won’t help much, but for those who like a good-old hardcopy of their favorite publication, a solid magazine rolled up tight can be become a short blunt weapon capable of delivering effective defensive and counteroffensive strikes.

It offers more reach than a short fist-loaded weapon, and affords more protection of the hands by virtue of the strike surface being further away from the fingers. This might seem like a shameless plug, but the added length and weight of a RECOIL OFFGRID issue make it perfect for this application. 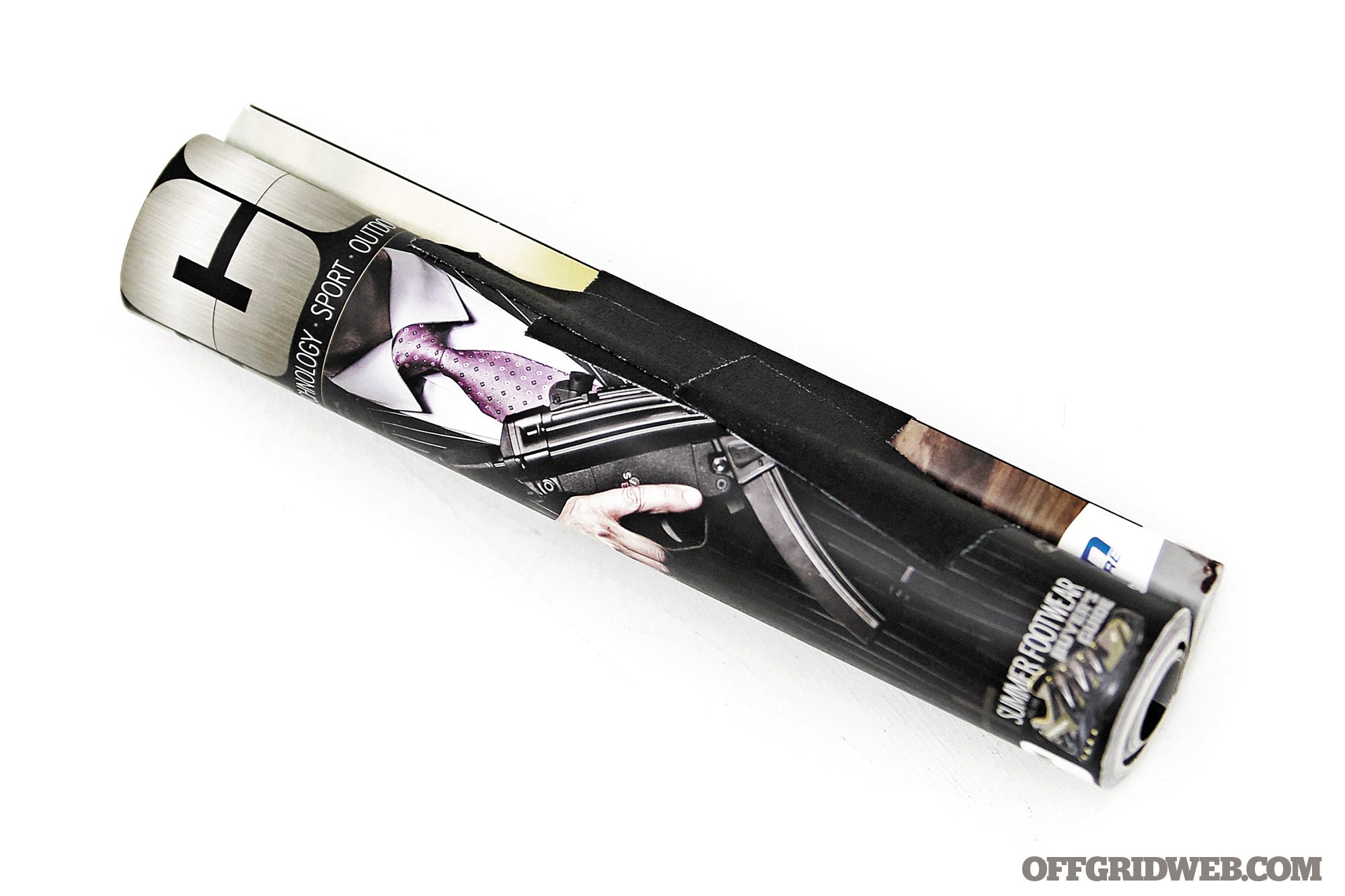 Don’t believe me? Roll up the bad boy in your hands and imagine jabbing one end of this magazine into your throat or eye.

A common tool that can be attached to a backpack, day bag, or keychain, a carabiner of the right size and material can be used much like brass knuckles. Throwing common boxing punches can be harmful to your unprotected hand, especially hook and uppercut angles that sometimes make contact with the sides or corners of your fist.

A carabiner can not only protect the hand from injury when performing such strikes, but also makes them more effective by concentrating the impact into a smaller contact surface. Look for something with a locking collar to prevent opening and causing injury to the hand while striking. Above: A well-made carabiner can work wonders as an impromptu knuckleduster, as it both protects the user’s fist will delivering power to a concentrated area.

There are companies that specialize in producing discreet (and sometimes not-so-discreet) fist-load weapons that are keychains, paperweights, and bottle openers. Regardless of how obvious their true nature is, these weapons will follow three general methods of application. The first works on the same principle as brass knuckles, designed to protect the front of the fists while delivering standard punching techniques. The second kind is designed to protrude from the top and bottom of the closed fist, where it can be used much like a knife in forward or reverse grip. Others will combine the first two, having protrusions from the top and/or bottom of the fist and something protecting one or more of the knuckles, generally with a ring feature that one or more fingers will go into.

For those prepared to pay a little more for tools of this nature, there’s my favorite company, RAIDOPS of South Korea. It has a huge variety of tools and use titanium in almost all of them. You can expect to find several other companies with great products for considerably lower costs, depending on the materials they use. Above: This fist-load weapon called the JW.Vulcan is a collaboration between the author and RAIDOPS (www.raidops.com), a South Korean company that specializes in tactical and survival gear.

Training to use these items for self-defense can be easier than one might think.

Focusing on the common principles utilized by each item rather than the differences between them will streamline the training process. In other words, use the principles of Kali, an umbrella term for the weapons-based combat systems of the Philippines. One of these principles is referred to as “transferrable methodology.” This means using the same core set of movements, regardless of what weapon is in your hand.

Don’t focus so much on the weapon, but rather the angles used to wield the weapon and the targets that should be addressed. All strikes will utilize either thrust or slashing motions. Think along the lines of a knife. When held in the hand with a forward (sabre) grip, you can use it to stab (thrust) or cut (slash). Using slashing angles, you can also strike with the pommel in a “hammer fist”-type attack. These same principles of angles and movement can be applied to any fist-load weapon.

The only difference to calculate for is the length of the weapon and whether it will cause puncturing wounds, lacerations, blunt trauma, or a combination.

An item like a carabiner used to protect the front of the knuckles will utilize the principles of a thrust, with the difference being the angle of the fist for a punch. Slashing angles can still be effective with a carabiner if it adequately protects the sides of the fist.

Jared Wihongi is founder and president of Survival Edge Tactical Systems Inc., a tactical training and consulting company. He is known to many as the face of Browning’s Black Label tactical equipment line. Wihongi is one of a handful of tuhon (master-level) instructors in the Filipino combat art of Pekiti-Tirsia Kali and has 15 years of experience in law enforcement. Most of that was spent as a SWAT officer and instructor of firearms and defensive tactics. Plus, he’s spent more than a decade teaching combatives and survival skills to police, military, and covert-operations units in Asia, Europe, North America, and South America. www.facebook.com/jared.wihongi / www.jaredwihongi.com