Not Your Grandpa’s Lever Gun

Written by Patrick McCarthy on October 29, 2020

Today, we live in a world of rapid innovation and obsolescence. Tools and technology that are common now are likely to be forgotten in a decade, if not much sooner. You’re probably not using a typewriter or telegraph to communicate in this era of laptops and smartphones. But there are exceptions to this rule — instances where the old ways may still have their merits. The surge in popularity of so-called tactical lever guns, such as this Marlin 336 Dark Series, illustrates this point. 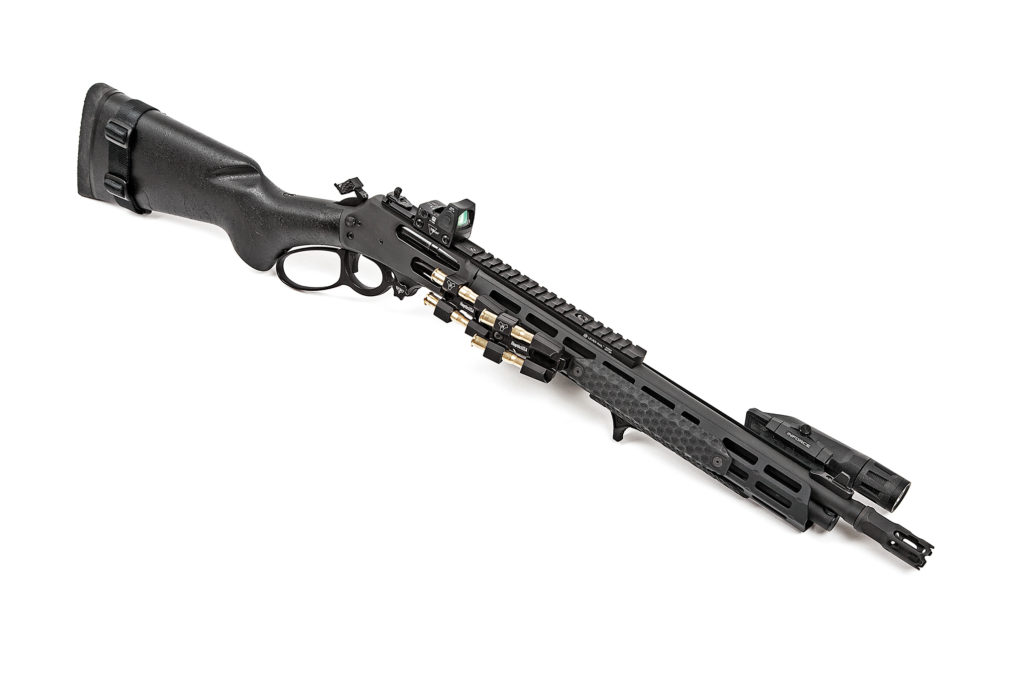 Old, But Not Obsolete

The Marlin 336 was introduced in 1948, but the core of its design dates all the way back to the Model 1893, a rifle named after the year it began production. Prior to the turn of the 20th century, lever-action repeating rifles from Winchester, Henry, and Marlin quickly became popular among American frontiersmen, cowboys, and outlaws of the Old West. Today, those lever guns are seen as an iconic representation of an entire era of weapons, much like the Thompson of the prohibition period or the AR-15 of today. So, how can they still be relevant in 2020 and beyond?

Firstly, there’s an unfortunate but important legal reason: Lever-action guns are generally legal in all 50 states. If you live in one of the states that heavily restricts semi-automatic rifles, a lever gun can be a good way to avoid the headaches of “featureless” builds and fixed magazines. Even if you don’t live in one of those places, these rifles can come with you if you travel through them. I recently visited family in California, and although I couldn’t legally bring my suppressed SBR or even a basic AR-15, I could bring this Marlin 336 Dark Series.

In addition, the COVID-19 situation has served as a reminder that finding ammo won’t always be easy. When popular calibers such as .223 and 7.62×39 were impossible to find at local stores, I had no trouble picking up boxes of .30-30. This round packs a wallop, to say nothing of the mammoth .45-70 that’s another popular choice in this realm. Lever guns are also lightweight, reliable, and as we’ll show later in this article, surprisingly well-supported with aftermarket upgrades. Above all, they’re a ton of fun to shoot. 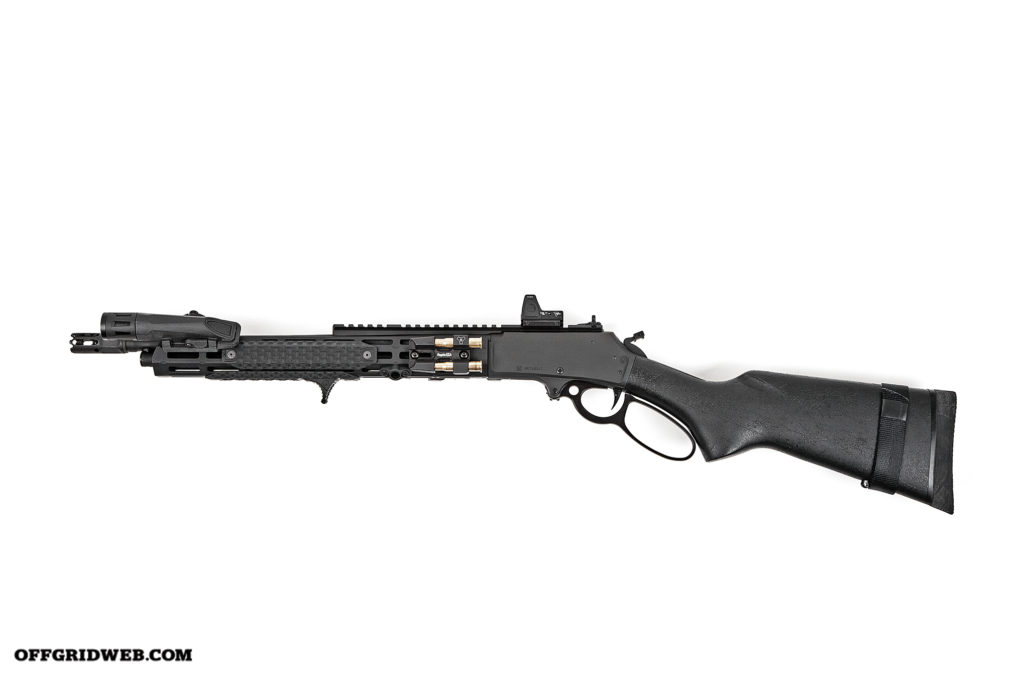 During the last few years, we’ve noticed an increasing interest in lever-action rifles within the firearms community. A younger demographic appears to be realizing their merits, and these buyers are molding lever guns to their existing tastes — think black finishes and accessory rails instead of wood grain and stainless steel. Marlin embraced this movement with the release of the Model 336 Dark Series.

The Dark Series features several modern upgrades from the factory. The traditional 20-inch barrel is absent, replaced by a shorter 16.25-inch barrel atop the five-round tubular magazine. The muzzle has 5/8×24 threads that make it easy to add a brake or suppressor. An XS Lever Rail with integrated ghost ring sight is preinstalled, enabling the addition of your favorite red-dot sight or magnified optic. The gun also comes with a paracord-wrapped big loop lever and paracord sling, which can be unraveled for spare cordage in dire circumstances. Metal exterior parts have a matte black Parkerized finish, and the stock and forend have a black spatter finish (they’re painted wood, not polymer as some assume). Although the Model 336 Dark Series is only available in .30-30, Marlin offers a Model 1895 Dark Series chambered in .45-70. In unmodified form, we thoroughly enjoyed the Model 336. At under eight pounds, this rifle is easy to carry and maneuver. The lever and hammer cycled smoothly, and the trigger was crisp with minimal slack. We weren’t particularly fond of the big-loop lever — its large opening would be useful for someone wearing thick gloves, but in any other case, it slaps against the knuckles during the initial forward motion. This uncomfortable feeling is compounded by the rough paracord wrap. Reloading quickly takes some practice, but should feel familiar to anyone who has loaded a shotgun.

Marlin’s Dark Series package makes the tried-and-true Model 336 into a great choice for the modern lever gun enthusiast. However, we still felt there was room to take this theme even further. Much like a gearhead adding disc brakes and fuel injection to an old Model A Ford, we decided to hot-rod the Marlin 336 with some aftermarket parts. 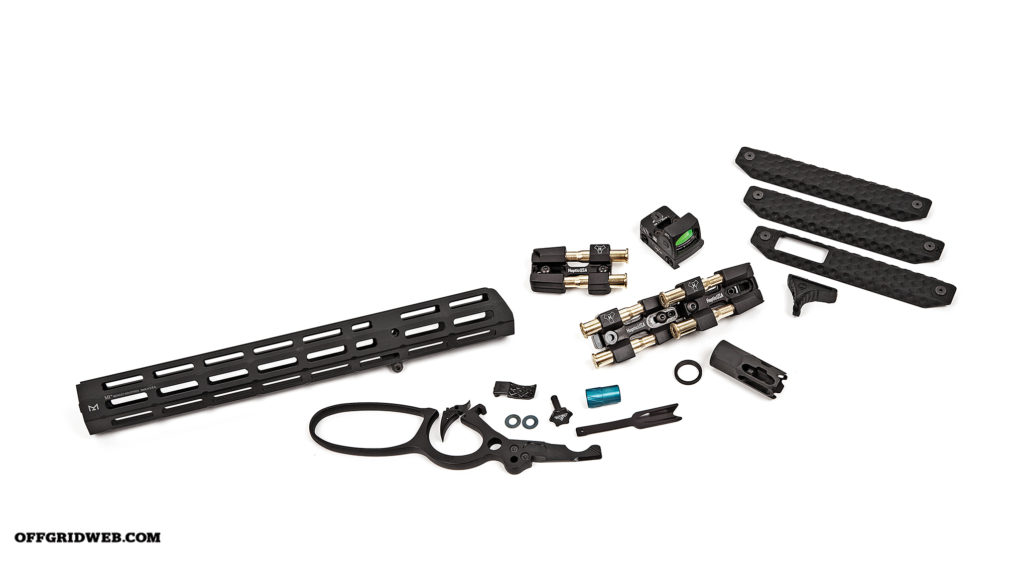 Our first stop was Midwest Industries for their aluminum M-LOK handguard. This immediately gives the rifle a more contemporary look, and serves as a foundation for other accessories. Model 336 variants with a barrel band forend will require an extra adapter, but this handguard bolts onto the Dark Series without an adapter.

A front sling stud is included on the handguard, but we removed it. Instead of using the standard fixed sling to carry the rifle over a shoulder, we wanted to set it up to be worn across the chest with an adjustable two-point sling, like any other modern carbine. A Blue Force Gear Vickers padded sling is attached to the side of the handguard with a QD mount, and was rigged to the stock using a scrap of nylon webbing and some buckles from a parts bin. This setup is secure and accomplishes its purpose, but we plan to drill and tap the stock for a cleaner-looking, recessed QD socket in the future. Above: After experimenting with a few different light setups, we decided the Inforce WMLx was a good fit for this build. The button is easy to reach, and the bezel sits behind the ports on the 2A Armament X3 Compensator.

Next, we picked out some additional components for the M-LOK rails. RailScales supplied grippy G10 panels and a Karve handstop; these items make the rifle much easier to control with the support hand while cycling the lever quickly. The Marlin 336 Dark Series’ 5+1 capacity is one of its most substantial drawbacks, so this has been supplemented with six rounds of spare ammo on HopticUSA Quiver carriers — one on the left side, and two on the right. The right-side Quivers are mounted on a prototype of the company’s new 2×4 bracket, which angles the front two rounds outward for easier access. The extra ammo can be pulled out and fed directly into the magazine, much like a sidesaddle carrier on a competition shotgun. To make the rifle usable in low-light environments and nighttime home-defense situations, we installed an Inforce WMLx 800-lumen light at the 10-o’clock position. Lastly, we selected a few mechanical upgrades. Recoil from the .30-30 cartridge isn’t as severe as you might expect in standard form, but we chose a 2A Armament compensator to make it even more manageable. The less-than-ideal big loop lever was swapped out for a lightweight medium-loop lever from Ranger Point Precision, a Texas-based company that specializes in lever gun parts. Thin shims were used to ensure the lever has no side-to-side play in the receiver (they’re sold in packs of two, and our gun needed three, so buy some extras). RPP also supplied an improved trigger, takedown thumb screw, smoother Flyweight loading gate, durable aluminum magazine follower, and an extended hammer spur. These items combine to make the gun much smoother to shoot, cycle, and reload, resulting in a higher-quality feel.

Since we didn’t have experience working on lever guns and knew that gun designs of this era often require some finesse, we took the Marlin 336 Dark Series and its parts to Wright Armory in Mesa, Arizona. Their gunsmiths installed the internal upgrades, handguard, and compensator, and ensured everything was working smoothly and safely.

In addition to the unique pros and cons of lever guns against more modern alternatives, we also took a look at the ballistic potential of the .30-30 cartridge itself, with an eye toward performance against light barriers in an urban environment (think car bodies and Sheetrock) as well as soft targets — whether two- or four-legged. As it turns out, the “vintage” .30-30 Winchester displays a striking resemblance to the Soviet-era 7.62x39mm. Despite being septuagenarian itself, the 7.62x39mm carries global notoriety for being barrier blind and brutally efficient inside of 200 yards, and it continues to shape the balance of world power well into the 21st century.

If you decide to integrate a .30-30 lever gun into your preparedness plan, feel confident that it will hold its own as a mid-weight, midrange round for game-getting and gun-fighting alike, even keeping ballistic parity with arguably the most battle-tested cartridge of the last 75  years.

Before heading to the range, we picked up a few boxes from Hornady’s selection of .30-30 ammo options, including 150-grain American Whitetail, 160-grain LeveRevolution, and 170-grain Subsonic. We were most impressed with the LeveRevolution cartridges, which feature FTX hollow point bullets with a pointed polymer FlexTip that improves velocity (and therefore expansion) compared to a typical flat-tip bullet. We noticed that this ammo also fed more smoothly, while flat-tip bullets would occasionally nose-dive and jam if we cycled the lever with the muzzle angled downward. The Subsonic ammo ran fine as well, but we primarily got it to complement our eventual plan to add a suppressor to this gun (stay tuned for more in a future article).

At the range, the modern two-point sling was an immediate improvement. Fixed slings make it difficult to unshoulder a rifle and get a sight picture quickly, and they’re certainly not suited to modern run-and-gun tactics. The RailScales and handstop also go a long way to make the Marlin 336 Dark Series easier to control while cycling the lever. Speaking of which, the Ranger Point Precision lever eliminated the issues we experienced with the big loop and gave the action a smoother feel. The original trigger was good, but RPP’s replacement is even lighter and more direct. It also eliminates the “flop” that’s present in the stock trigger when the hammer is cocked. Paired with the compensator and red-dot sight, it became easy to get multiple rounds on target in quick succession. Reloading is easy, too, thanks to the rounds staged in Quivers immediately in front of the lower-resistance RPP loading gate.

Naysayers might claim that lever guns belong in a museum, but this build reinforces the fact that, with a little work, these old-school rifles still have their place in the world of modern weapons. While they can’t match the sustained rate of fire of semi-autos with detachable 30-round magazines, lever guns can be an excellent option for those who live in places where those guns aren’t readily available. And no matter where you’re from, they’re sure to put a grin on your face as you run through a course of fire like a cowboy-turned-high-speed-operator. Those 1890s frontiersmen might be confused at the sight of this futuristic concoction, but we’re sure it’d win them over if given the chance.

More from OFFGRID on Firearms