Building a Pipe Shotgun with the Pop-A 410 DIY Kit

Disclaimer: It’s legal for you to build your own firearms. Convicted felons or other prohibited persons, however, cannot. There may also be other applicable laws where you live, so double check the regulations in your jurisdiction. CMG West, its parent entities, and subsidiaries shall be held harmless in the event any entity acts on information provided in this article.

In the past few years, a “do-it-yourself shotgun” kit has become popular, billed as a survival gun. It’s made by Runway Sub-Cal, a manufacturer known for producing rifled flare gun inserts to allow shooters to fire pistol rounds through 26.5mm flare guns. Essentially, they provide a barrel, firing pin, and an outer barrel sleeve; the rest of the pipe shotgun is built from steel pipe fittings. I was a bit hesitant going into this assignment, but read on and see why it’s important for a number of reasons. Several retailers carry this kit. We ordered ours from Bud-K for $130 with free shipping.

The pipe shotgun package arrived via FedEx Smart Solutions, meaning that FedEx did all the heavy lifting getting it to within 20 miles of me and transferring final delivery to my local post office. Bud-K packaged it well enough, but after opening it up I realized there was no instruction sheet.

This wasn’t a big deal, as the kit is straightforward with a video on the company’s website. When compiling the items needed to finish it up, I went to double check on the website what a “jam nipple” was and realized the firing pin wasn’t included in the shipment.

Bud-K’s customer service desk began looking for extras in their warehouse. If they were unsuccessful, they’d have me return the kit in exchange for a new one. A few days later, they advised that the manufacturer would ship out the missing components directly. After about a week, it arrived.

Completion of the kit requires the following ½-inch pipe parts: 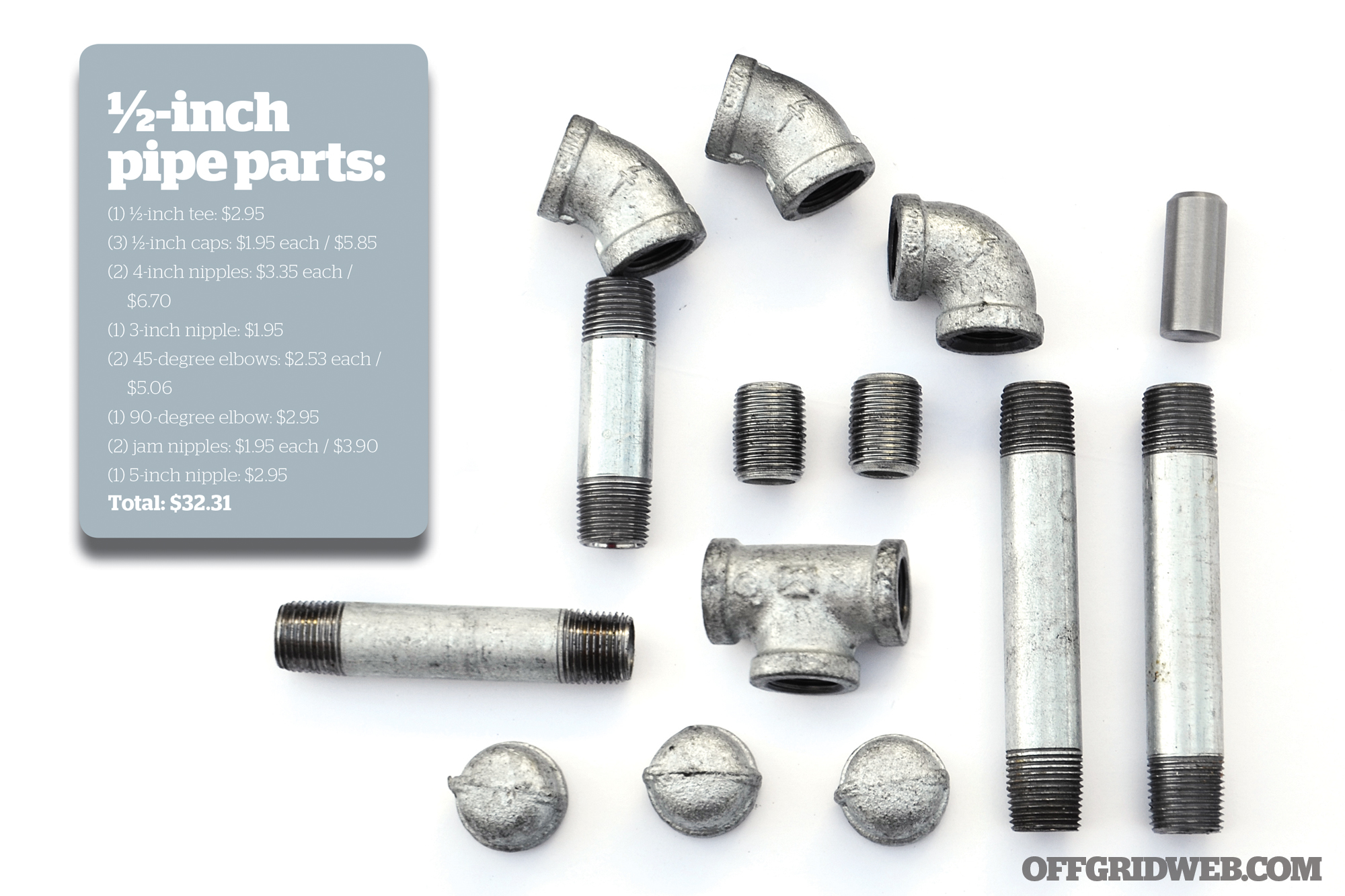 The only parts that were somewhat difficult to find were the so-called jam nipples. These are short nipples that are completely threaded. I found them under a variety of names such as zero nipples and flush nipples. Perhaps jam nipples are a colloquialism in certain parts of the country or an older plumbing term, but I couldn’t find them under that name in stores near me.
After a quick trip to Home Depot and $32 later, I had everything I needed to put the Pop-A 410 together.

Assembly took about 15 minutes, if that long. One of the trickier things to get right was ensuring that the angled pipe connectors aligned properly. They might line up perfectly while only grasping two or three threads, but then would be totally out of alignment when tightened all the way down. Lucas Oil Gun Grease and a small pipe wrench in conjunction with a vise got everything properly into position. I threaded as far as I could, backed off, and repeated in order to grasp more threads to make it sturdy and straight.

Once you have an idea on how everything lines up, you can make it semi-permanent by using plumbers’ tape, Loctite, or another adhesive. Some builders have used JB Weld for a more permanent fix, but that might be excessive.

A crucial piece of this assembly is the ½-inch tee piece. This acts as your receiver, for lack of a better term, and the firing pin should be able to pass completely through it. Above: For less than $35 in pipe fittings, you can complete the Pop-A 410 kit and have a single-shot shotgun.

When finished, you have basically a two-piece pipe shotgun composed of a chambered, spring-loaded barrel, a homemade receiver containing a fixed firing pin, a homemade stock, and pistol grips. A “safety” is included in the form of a clip that inserts between the firing pin and primer, attached to a short piece of cord so you don’t lose it. There’s no sighting system, but the forward pistol grip has a Weaver-style base so you can mount a red dot or visible laser. A short sheetmetal screw with a rounded head could make for an improvised bead sight.

You can leave the Pop-A 410 unfinished, “in the white,” or you can break out some Krylon, Duracoat, or even Cerakote if you feel fancy and coat it in a protective finish.

To fire the Pop-A 410 you load the chamber, shoulder the pipe shotgun, take hold of the forward grip, aim, and slam the barrel rearward. The impact of the firing pin against the primer of the shell causes ignition and fires the projectile.

The first round was a bit of a doozy. The thought that kept going through my mind from the moment I loaded the chamber until I actually fired it was, “Will that galvanized pipe fitting and that two-piece barrel assembly that I bought be enough to handle 12,500 to 15,000 psi?” Above: Shooting the Pop-A 410 pipe shotgun is a bit tricky due to the lack of a trigger, but not difficult. Shoulder it, take aim, and slam the shell rearward into the firing pin.

It turned out that it was. The burst rating on this type of pipe is 21,000 to 26,000 psi, while pressurized. The short impulse of firing a single round of ammunition plays a role, too. Still, no one will get “millions of rounds out of this” weapon. I fired close to 150 rounds of assorted birdshot, buckshot, and buck and ball shot, without incident.

Beyond the fun factor, this is a firearm of last resort. For instance, if you had to build something out of scrap to forage for birds and squirrels in a survival situation. Or, in a darker scenario, if you needed to make something in order to take out the opposition and scavenge his weapon.

While this was a fun project, it’s a bit expensive for what you get. It’s basically a slam-fire .410. You can walk away with the satisfaction that you built a firearm on your own. Plus, putting it together may provide a better sense of how firearms work, along with the pride we all get whenever we build something with our own two hands. Above: For the cost of a completed Pop-A 410, a shooter can pick up a purpose-built shotgun in the same caliber, many made before 1968 also lack a serial number such as this single-shot Winchester Model 37 and an over/under Stevens Model 420.

If you’re mainly intrigued by the fact that you can build a firearm without a serial number and wondering why you'd invest the time and money in one of these, there are other alternatives.

For example, there are untold numbers of firearms, mostly shotguns and rimfire rifles, built before 1968 that have no serial numbers and can be purchased for much less than what was invested in this project. These aren’t just rusty single-shot cracked-stock scatterguns, either.

Over the years I’ve acquired single-shot shotguns made by Hopkins & Allen, New England Firearms, Harrington & Richardson, Iver Johnson, Savage/Stevens, and Winchester for less than $90 each — and in the case of the Hopkins & Allen and Stevens models, less than $40. An over/under Stevens 420 in .410 made 75 years ago set me back $110, and a bolt-action Sears 12-gauge cost me $60. None of these firearms have serial numbers; neither do a handful of 22 bolt-action and single-shot rifles I’ve acquired over the years. Above: It may not be a collector-grade, heirloom-quality firearm, but the Pop-A 410 survival shotgun represents a learning tool and a lightweight firearm that may be enough to keep you alive.

Any prepared individual should have low-cost firearms on hand, because they’re cheap, easy to learn how to use, and can be loaned, bartered, or otherwise utilized in the event of a large-scale long-term disaster.

The Pop-A 410 survival shotgun can fill this role, but it’s more significant along the lines of a first-time gun-builder understanding how a firearm can be built, along with the inspiration for ideas on how to build your own, should you find yourself in a situation where making a firearm from scratch may be your only option. 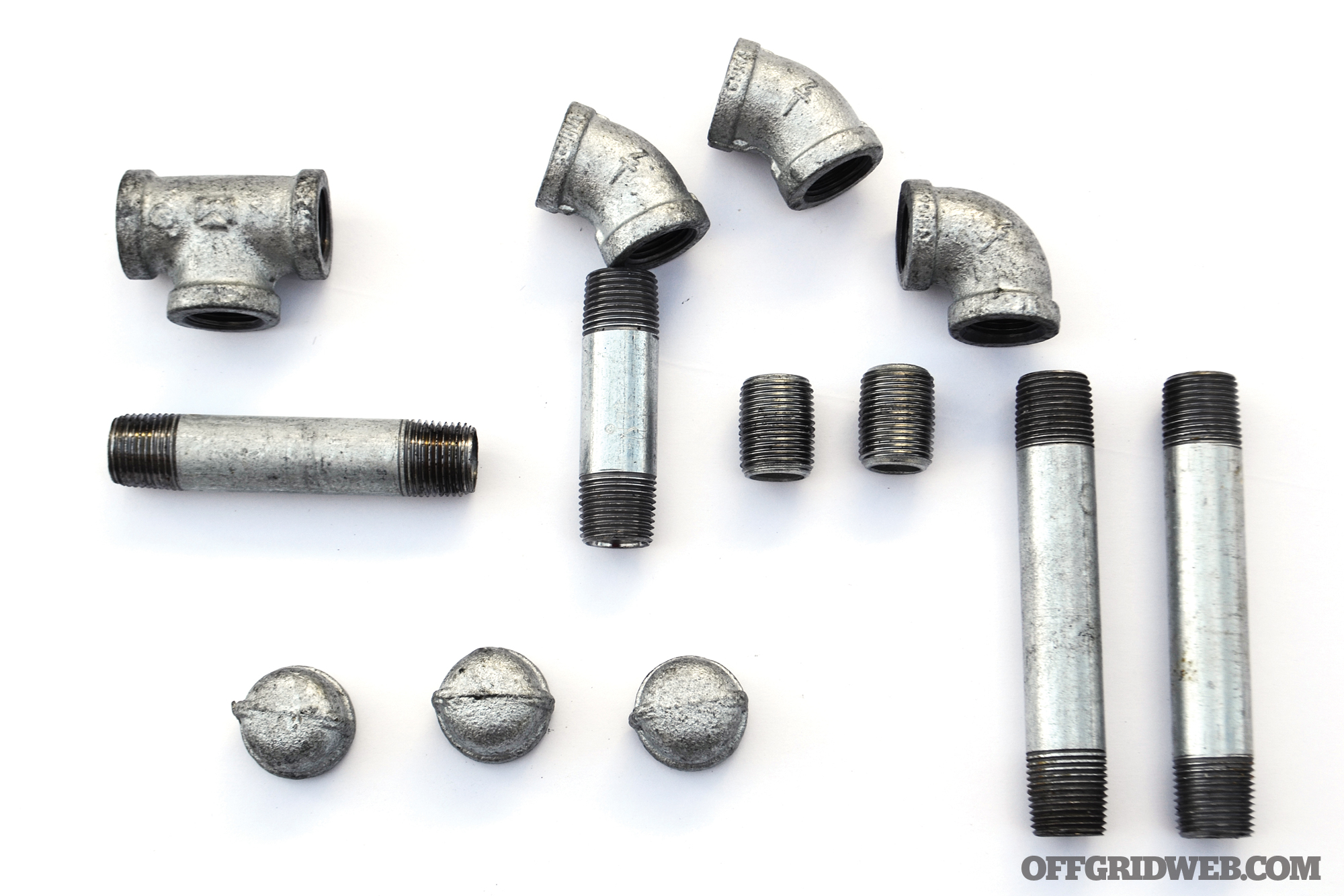 Examine your ammunition types on hand and see how they fit in various pipes or tubes. Find pipes or tubes in a suitable grade of metal to contain the chamber pressure of the firing sequence and experiment. You can build something like the Pop-A 410 to gain an understanding of how the parts fit together properly and take those concepts to forge ahead on your own.

The key to preparing for a disaster and surviving is the knowledge we obtain and how we successfully apply it. A simple project like this can act as food for your mind.

MORE FROM OFFGRID ON FIREARMS