Written by Patrick McCarthy on December 4, 2022

The term “technical” is often used to describe a civilian vehicle — usually a 4×4 pickup like the venerable Toyota Hilux — that has been modified to carry an onboard weapon system such as a heavy machine gun, anti-aircraft cannon, or anti-tank rocket launcher. The underlying light, mobile weapon concept dates back far beyond the automobile to horse-drawn tachanka carts of the First World War and carroballistas (essentially huge crossbows mounted on carriages) of the Roman Empire. However, according to the book Technicals: Non-Standard Tactical Vehicles from the Great War to Modern Special Forces by Leigh Neville, this descriptor originated during the Somali Civil War in the early 1990s, where NGOs hired local gunmen in “Mad Max-style armed pickup trucks” for protection under the guise of being “technical advisers.” As with other weapon concepts that have persisted through history, technicals still appear in nearly every modern conflict because they’re extremely effective. Unlike purpose-built military vehicles that require specialized, expensive parts and complex maintenance routines, technicals are based on vehicles that can be purchased locally and serviced at any Jiffy Lube (or its third-world equivalent). Their weapon components are bolted or welded in place, so they can just as easily be removed and exchanged. And if the vehicle is damaged in combat, repairing or replacing it is a matter of tens of thousands of dollars, not hundreds of thousands. Above: The Dillon Aero MMC turret system built into this custom bed cage helps the operator maintain control of the M134D as it spews a near-continuous beam of rounds downrange. This weapon produces a considerable pile of spent brass and belt links after a few short bursts. Arizona-based weapon manufacturer Dillon Aero recognized the merits of the technical formula, but wanted to put its own spin on it — literally. The Dillon team purchased this 2021 Ford Ranger and equipped it with the company’s Multi-Mission Capable (MMC) system, which is a modular, power-operated turret that can accept a wide variety of weapons. The compatibility list includes M240 and M60 medium machine guns, M2 .50-caliber heavy machine gun, MK19/MK47/H&K GMG automatic grenade launchers, the Russian PKM, and many others. But this truck features the cream of the crop — Dillon Aero’s M134D minigun, which doles out a staggering 3,000 rounds of 7.62 NATO per minute. That’s 50 rounds per second, or about four times the rate of fire of an M240. While taking photos for this article, we had the opportunity to send some rounds downrange with the M134D in the MMC turret, and we can only describe it is as a firehose of hot lead. If you can use one without grinning ear-to-ear, we can’t be friends. Above: The bed cage was designed to accommodate overland accessories such as these Rotopax fuel canisters.

As cool as the minigun is, there’s more to this truck than its armament. A representative told us, “The Dillon Aero Ford Ranger goes a step further with the engineering effort to mount field-deployable communication systems that allow for ground control of military and civilian aircraft. We also implemented overland features that allow for extended capability in various mission settings.” The most noticeable upgrade is a one-of-a-kind custom bed cage that supports the MMC system; Dillon engineers designed and prototyped it using CAD files provided by Ford. The truck also features Coastal Offroad front and rear bumper sheetmetal kits, which were welded and finished in-house. The front bumper contains four Baja Designs LED lights and a Warn winch; the rear bumper has a swing-out spare tire carrier and antenna mount. That antenna is connected to a Mil-spec PRC-113 VHF/UHF radio that sits atop the truck’s dash. Above: A Mil-spec PRC-113 radio adds communication capabilities to this truck. To save space on the dash, its bulky amplifier was relocated to the floor behind the center console. 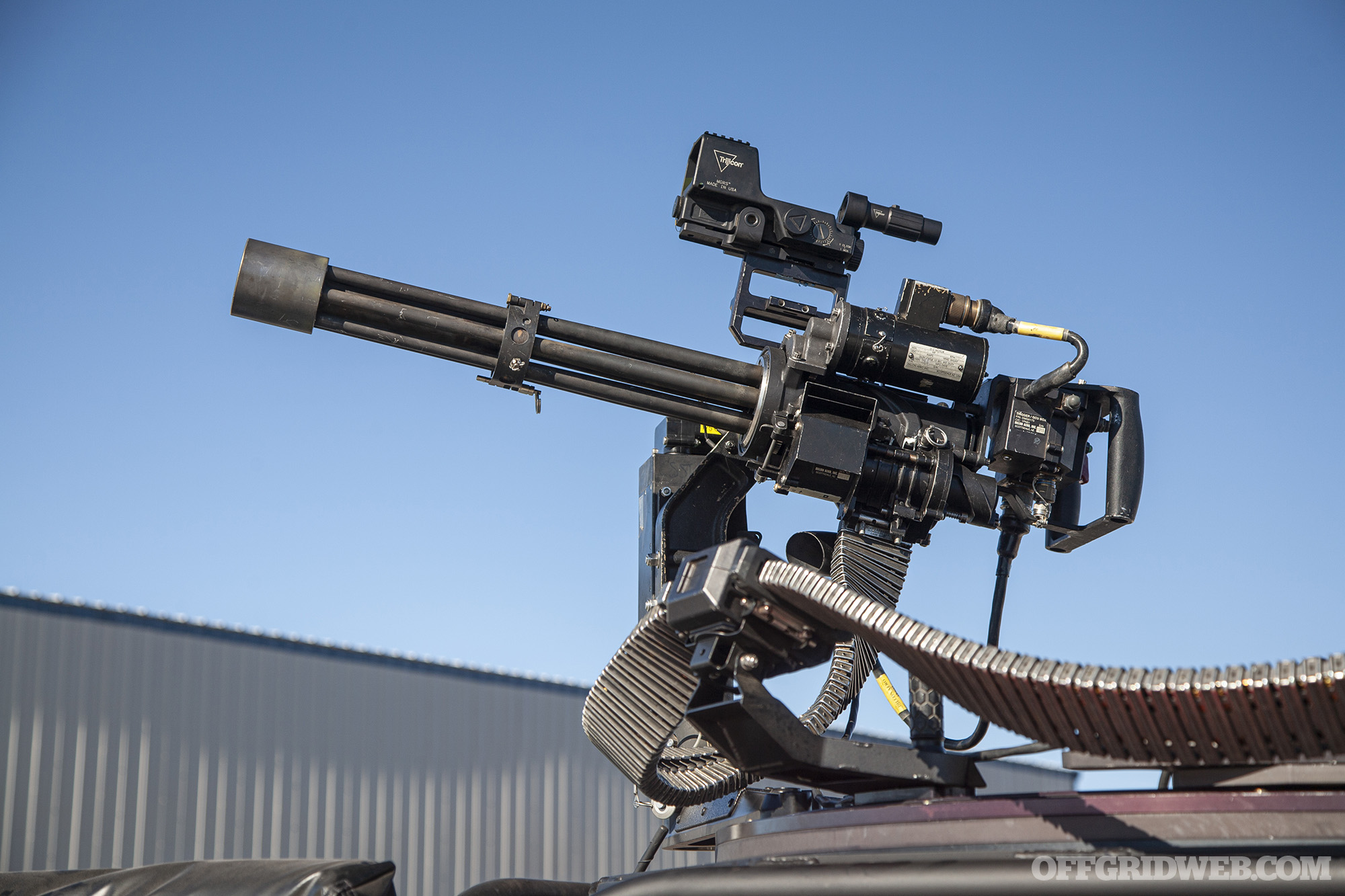 Above: The MMC turret accepts a variety of weapons, including heavy machine guns and grenade launchers, but this Ranger is equipped with Dillon’s own M134D Minigun. We’re told they also have plans to try it with the .50-caliber 503D Gatling gun in the near future.

Although technicals are typically the work of “austere” mechanics and fabricators in war-torn countries, it’s not hard to see why mainstream manufacturers like Dillon Aero (and Global Military Products, distributors of the Scorpion mortar truck we featured in Recoil Issue 61) are getting on board with the idea. It’s much easier and more cost-effective to install a weapon system on a locally sourced civilian truck than it is to send a custom-built military vehicle halfway across the globe and keep it running. Kyle Goodale of Dillon’s Special Projects skunkworks explained, “We’ve had many vehicle platforms come into the shop, usually built for one purpose or another … The Ranger represents the first project of its type for Dillon Aero, where the Special Projects division was given a blank slate to build upon. We look forward to implementing it in our testing processes for various weapon systems such as the 503D (.50-caliber Gatling gun) platform and having a good time with it as well.” Above: This high-clearance Coastal Offroad rear bumper includes a swing-out with a full-size spare tire, trash bag, and antenna mount. 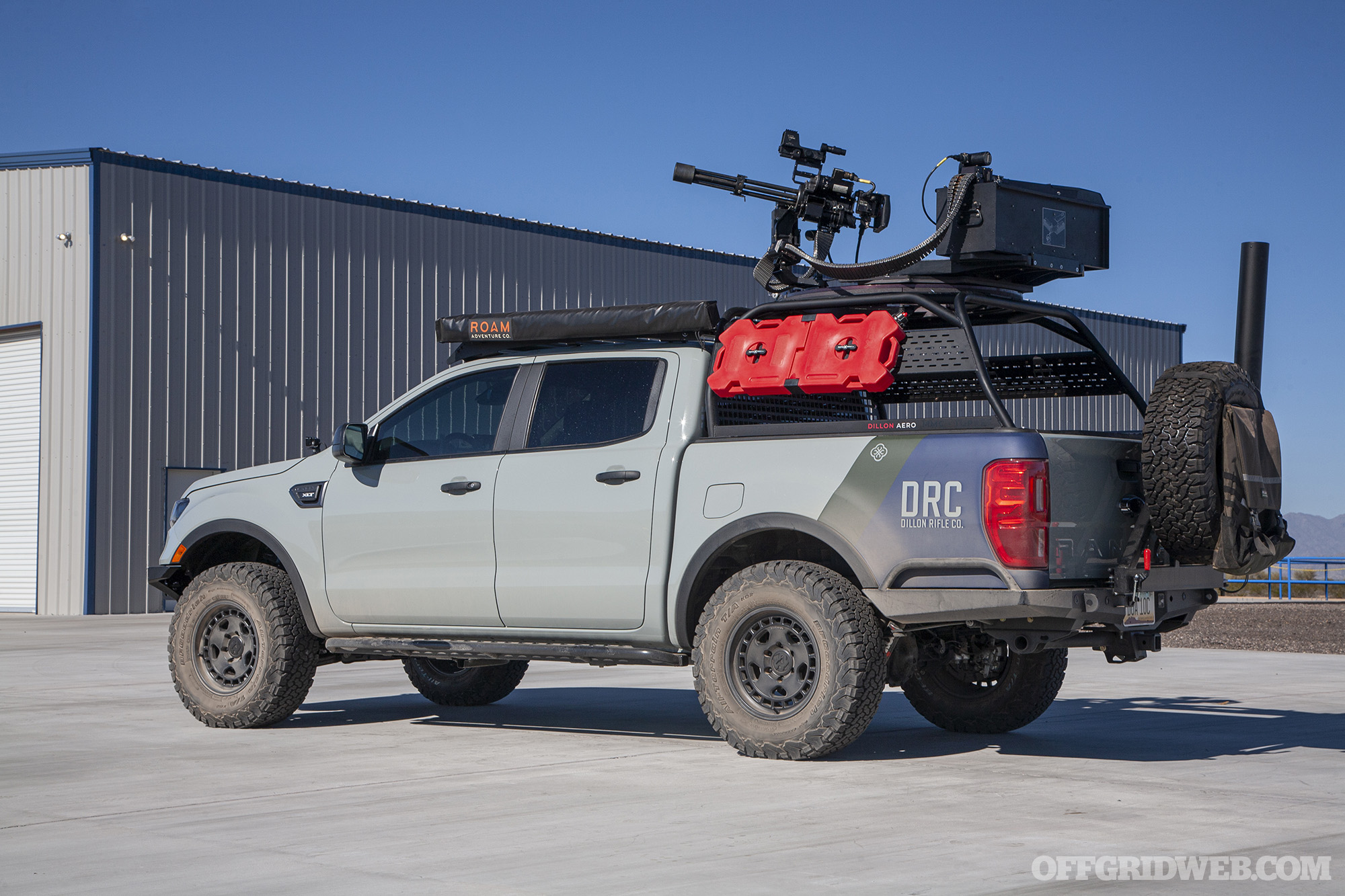