Written by Patrick McCarthy on January 16, 2023

Thermal imaging is an incredibly powerful technology, whether it's being used for hog hunting, tracking fugitives from a helicopter, or locating enemy troops on a battlefield. It illuminates warm-blooded creatures instantly, even if they're visually camouflaged and motionless. At SHOT Show 2023 this week, Holosun unveiled an exciting new hybrid optic called the Holosun DRS (Digital Reflex Sight) that integrates a thermal or digital night vision overlay onto a standard red dot. Although it's not ready for retail release yet, there are a handful of prototypes undergoing testing, and we got our hands on both variants at the SHOT Show Range Day. 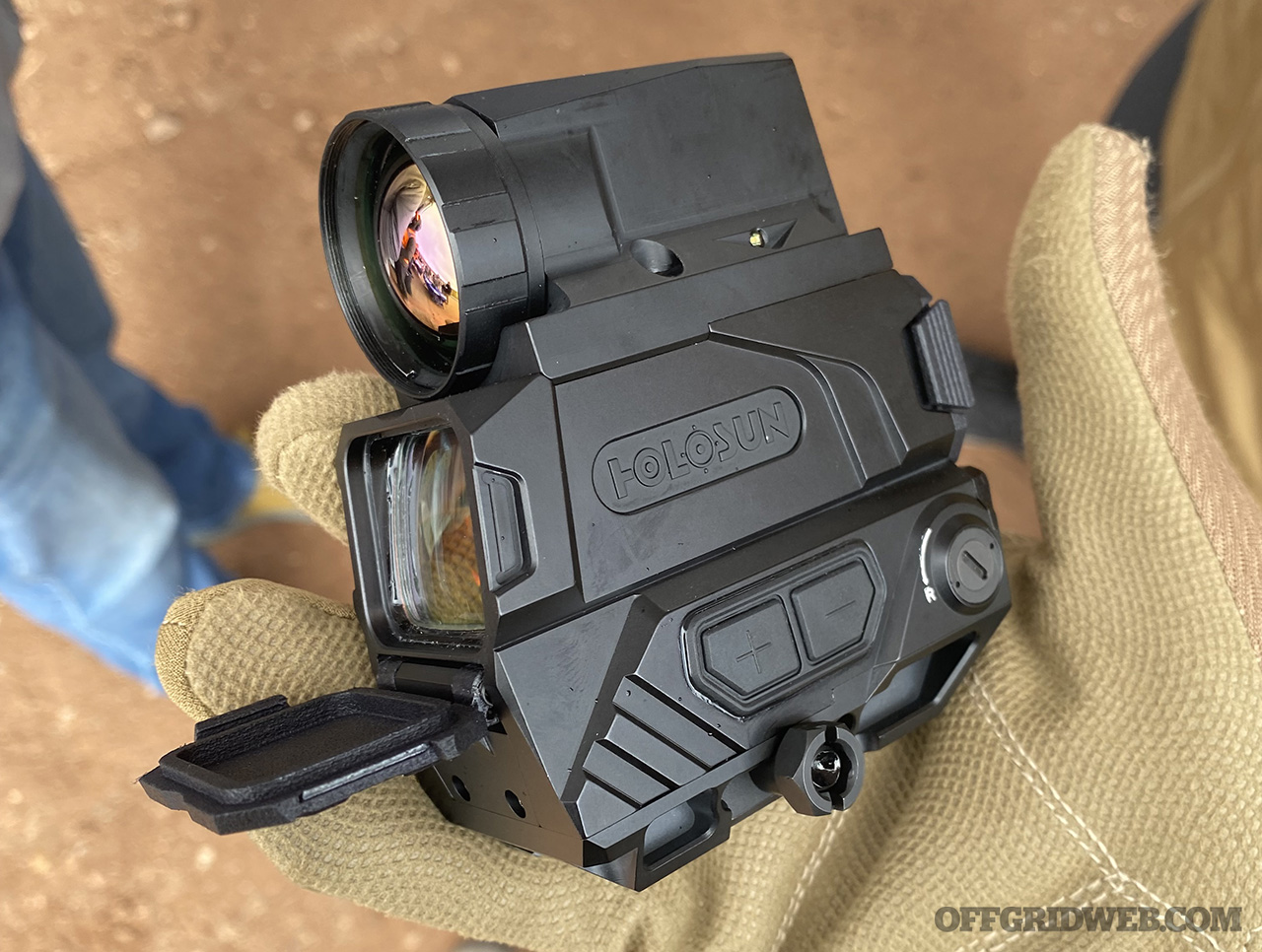 The new Holosun DRS (formerly known as the DMS in its prototype phase) appears to be based on the popular Holosun AEMS, a compact, enclosed-emitter red dot with flip-down lens covers. However, in this case the front cover is opaque instead of clear. When it's flipped down, the optic works just like a normal red dot with adjustable brightness and Holosun's selectable dot or circle-dot reticles.

When the front lens cover is flipped up, you can press a button to activate the DRS's secondary optical system, which will be projected onto the black window behind the red dot reticle. Since the red dot is independent of the background image, the optic maintains the same zero at all times, day or night.

We checked out two Holosun DRS sub-models, each with a different secondary overlay: Above: Editor Tom Marshall tests the Holosun DRS-NV. It can be identified by the top-mounted digital night vision camera, which is slightly smaller than the DRS-TH thermal camera.

The red dot and secondary thermal or NV optic are independent of one another, so during the day you can leave the secondary optic disabled to conserve battery life. Speaking of batteries, the unit is powered by two 18350 rechargeable lithium batteries, which can be charged directly inside the DRS optic via a built-in USB port on the right side of the housing.

That USB port also offers the ability to stream footage to a secondary screen in real-time, so you could connect your DRS to a tablet and use it to observe a static position without getting behind the weapon. 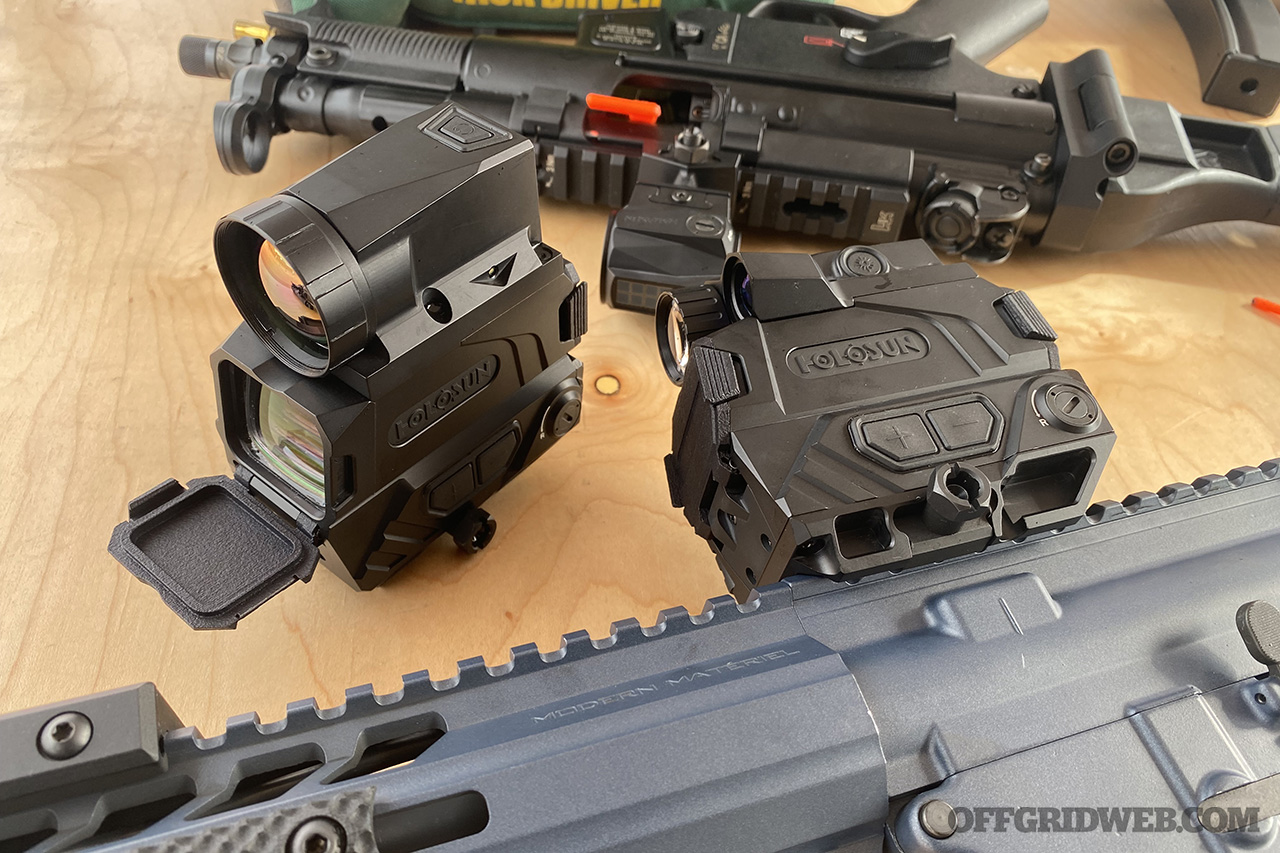 Above: The Holosun DRS-TH Pro (left, with opaque cover flipped down) and DRS-NV (right, with cover flipped up). Note the small protrusion next to the NV camera lens — that's an infrared illuminator for use in environments with no ambient light, such as dark buildings without windows. The illuminator can be toggled on and off independently. Above: We took several photos and video clips through a pre-production DRS-TH Pro during SHOT Show. This image shows the view with the front cover up and the red dot sight turned on. Ignore the slight blur that was induced by holding our camera behind the optic — the display is quite sharp in person. Click here for a video of the DRS-TH Pro in action.

Initial performance impressions were good, with a clear image and fast refresh rate. The DRS-NV image appeared somewhat dim during our morning trip to the range, but this is understandable due to the bright daylight conditions; it should be much easier to see in the dark conditions it was designed for. The DRS-TH showed body heat prominently in the daylight, with a bright red dot on top. Above: The DRS-NV digitally intensifies visible and infrared light to generate a monochrome image of the environment. This photo was taken indoors in a well-lit area, but we hope to test it in the dark soon. The red dot sight is turned off in this photo.

Holosun hasn't finalized the designs and features of these optics, but we're told the DRS-NV should be priced under $1,000. That's impressive considering an AEMS red dot is nearly half that without the extra optical system on top. As for the thermal DRS-TH, there will be a standard model available for approximately $1,600 and a premium, higher-resolution DRS-TH Pro model available for about $2,300. We'll keep you posted once we have more details about availability, and we're already planning a thorough review as soon as final production samples are available from Holosun.

After walking through the manufacturer booths at SHOT Show 2023, the Recoil staff discussed which product would win their “Best of Show” award. Since the Holosun DRS brings advanced thermal and night vision technology to the consumer market at an attainable price, our editors agreed it should receive this coveted title. Check out the video below from RecoilTV to watch the award announcement: