How to Configure Your Carbine or PDW for Use with NVGs

Night vision capability is a powerful advantage for any emergency preparedness plan. Last year we dedicated an entire print issue to the topic. The most important lesson is that working effectively in the dark isn't as simple as buying a PVS-14 monocular or a pair of goggles and slapping them on your helmet. Particularly if you want to effectively pair defensive firearms with night vision, there are some unique considerations to account for. Integrating infrared lasers and illuminators onto your night vision rifle setup of choice will make it more versatile under NVGs. Above: An infrared laser offers the ability to “actively” aim at a target without looking through the weapon sight. Even if you plan to “passively” aim through a red dot sight, an IR laser serves as a valuable backup.

Adding an IR illuminator and/or laser to your rifle will have a noticeable effect on its ergonomics and control suite. Not only do these accessories take up a good chunk of “rail-estate” but so do the buttons and switches required to operate them. If they're configured in a confusing or inconvenient manner, they may impede your ability to use the weapon or distract you from the task at hand. Fortunately, the aftermarket is flush with options for operating both white lights and IR lasers seamlessly, with minimal impact on how you would normally handle your weapon. While there are also plenty of options for handguns, this article will focus on carbine and PDW switchology, as it tends to be a little more equipment-intensive than configurations for handguns. 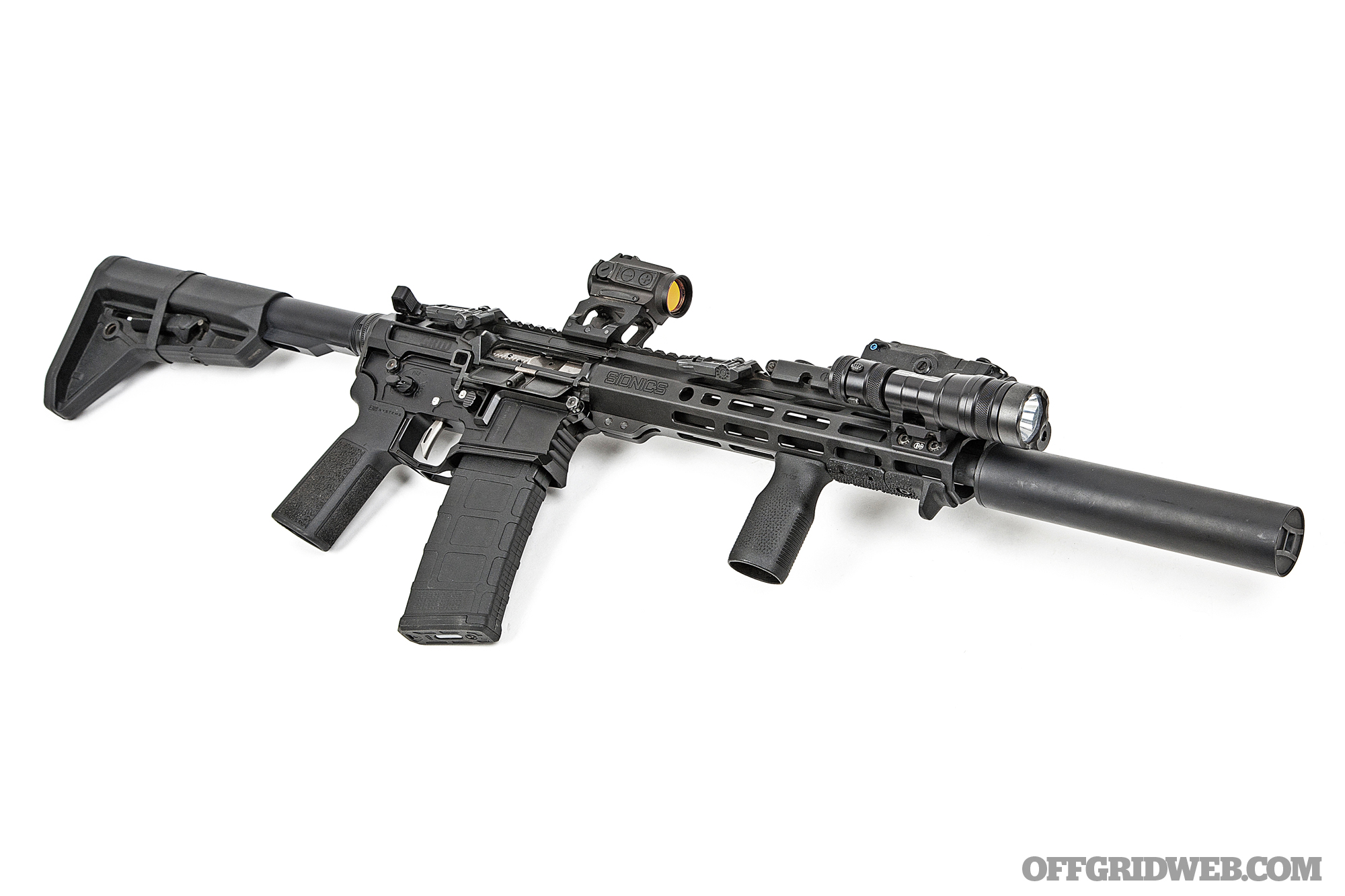 The first step in determining what your switching/control requirements are is to determine what your IR laser/illuminator setup looks like. There are two basic answers to this question: Above: The author's “Do-All Survival SBR” incorporates an Arisaka/Malkoff Devices white light at 3:00 and a Holosun IR laser/illuminator combo at 12:00.

Subdividing the choices even further, there are two possible illuminator/light solutions to consider:

Read on as we show some practical examples of each of these night vision rifle setups. These are the ideal solution if you can afford it. The general performance of your NVGs will depend on the quality of your tubes, but all night-vision requires ambient light and all will experience degraded performance when environmental lighting is in short supply. For example, think of a dark basement with no windows, or a bedroom at night with the curtains drawn. While lasers will give you a visible point of aim for shooting, they will not light up the target or its background. This is why IR illumination is so vital to a holistic NV-capable weapon setup.

IR laser / IR illuminator combo units offer a one-stop answer to this problem. But they’re noticeably more expensive than purchasing a standalone laser. Some examples include:

Almost all systems in this category come with factory pressure pad remotes, but many folks will simply use the on-body button. Since you typically will not activate a flashlight and IR unit simultaneously, combo units are great for those who prefer avoiding the clutter of tape switches and remotes altogether. Position the combo unit and white light so that both push buttons are near your support thumb, and press whichever one you need when you need it. This is most effective on shorter weapons like SBRs and PCCs/PDWs where rail space is limited. The alternate option is a remote switch, or switches. As we said, just about every laser out there will come with a tape switch. But when you are trying to integrate said switch onto a handguard that already has a remote pad for white light, space becomes limited quickly. This is where aftermarket solutions like the Unity Tactical TAPS come into play. Designed in conjunction with TNVC, the TAPS offers a single, slightly enlarged pressure pad with two distinct buttons, and dual cable leads, to activate light or laser off a single plate. The TAPS is designed from the bottom up for low-light use. Each of the two TAPS buttons includes visual and tactile “dots” molded in so that, even without being able to see the buttons, you can figure out which peripheral you are about to activate. Our example here is a Holosun LS321G, which features a green laser, IR laser, and IR illuminator combined into a single unit. The white light is an Arisaka 18650 light body with Malkoff Devices E2XTD head, run off the Unity TAPS switch. If an IR laser with built-in IR illuminator is out of your budget, you can pair a standalone laser with a dual-output weaponlight. Some examples of standalone IR lasers without onboard illuminators include: The example seen here is a Holosun LS221G, which is a green/IR laser-only unit, paired with a Surefire M600V Scout Light. The V-series Scouts feature a head assembly which can be switched from white to IR light by twisting the head to select your desired mode. This option can help keep costs down as you get both a white light and IR illuminator in a single purchase. But there are two trade-offs to this. First, building dual-spectrum output into a single light head means that, while your light becomes a jack-of-all-trades, it will be a master of neither. Dual-mode lights typically have much lower white-light output than their dedicated brethren. For example, the white-light-only M600 Pro has an output of 1,000 lumens. But the dual-mode M600V Pro only pushes 350 lumens of white light and 120mW of IR illumination. The other issue is one of switching. When you’re using white light, you only want the white light. When using IR, you’ll want the light and laser activated simultaneously. For cases like this, we are back to Unity Tactical for the TAPS SYNC. Its physical layout is identical to the standard TAPS, but features internal program that can be had in several configurations. Our example here is the “V1” programming, setup as follows: When you need white light, rotate the head to white output and use button 1. When you want to shoot under NVGs, rotate the light head to IR mode and use button 2 to fire it and your standalone laser at the same time for targeting and illumination.

This is, of course, not the only way to do this. You could try to use a combination of body button (or click tailcap) plus a single-output tape switch, but we have found that this is awkward to operate on the fly, and we run out of fingers trying to push two buttons on and off while maintaining a positive grip on the weapon. The third option is to mount a standalone IR laser (as discussed above), a dedicated IR illuminator, and a dedicated white light.

Again, with all things, there are trade-offs. On the upside, dedicated IR illuminators will have much stronger output than a dual-mode weapon light. Our setup here features an Arisaka Defense 300-series Scout-style light body with a Malkoff Devices EX IR 250 IR-only head. The Malkoff head is capable of 250mW of IR output, with a 4-hour runtime on a single CR123 battery. There is also a 700mW version available for longer-range use. Both will give you far superior illumination to a dual-mode white/IR light. But this requires you to then mount an entire second flashlight onto your weapon for white-light capability. Not only is this added weight and bulk on the muzzle end of your weapon (where you’ll feel it most) but you now have three wires to manage instead of two. 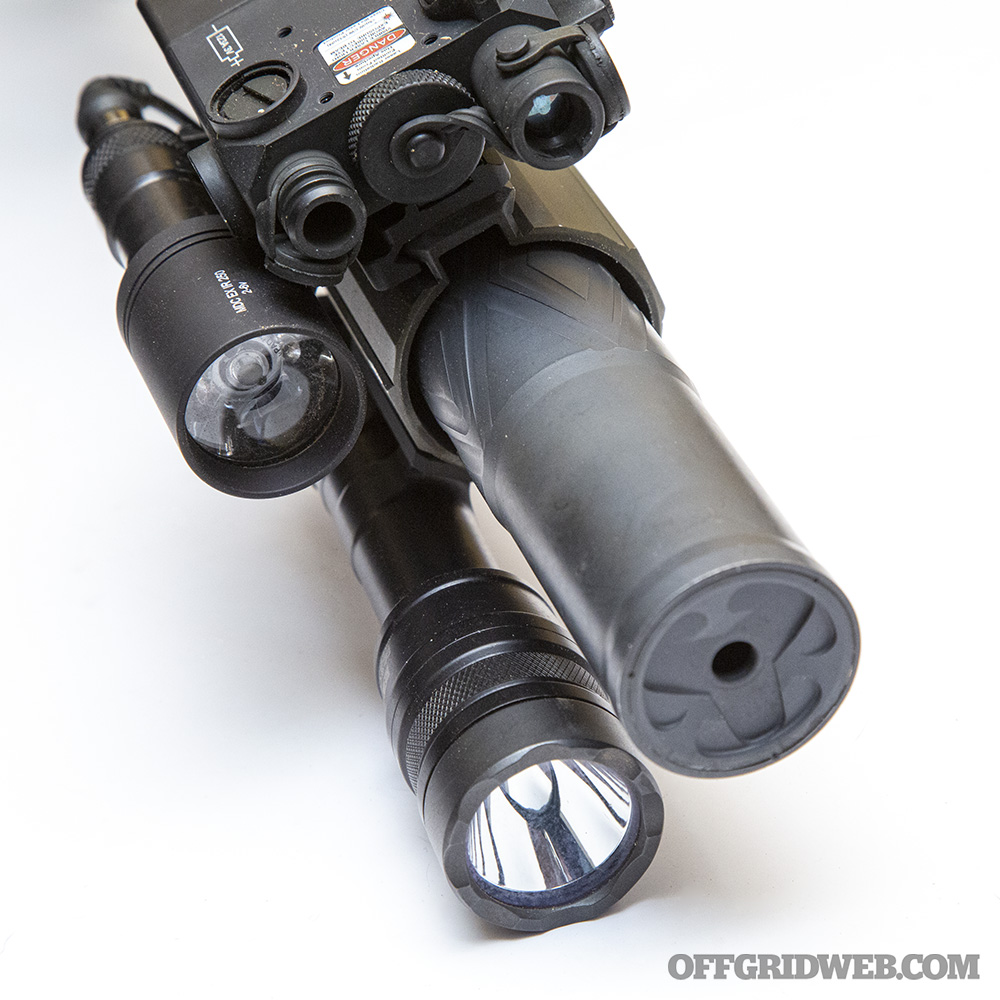 We mounted our Arisaka/Malkoff illuminator in tandem with a Steiner DBAL-I2, on an American Defense Manufacturing DBAL-SF mount. This is a single mount with QD lever attachment with direct-mount brackets for both a DBAL-style laser and a Surefire Scout-style light. This unit puts your laser at the 12-o-clock position, with a 45-degree offset for the accompanying light. This mount can be used with multiple lasers and lights in whatever combination you can think of, but we felt it was ideal to run a standalone laser with standalone IR illuminator. For white light work, we mounted a Cloud Defensive REIN 2.0 at the 5-o-clock position. Any light with a Surefire-pattern remote socket would make this another ideal place to put a Unity TAPS SYNC. But because the REIN has a proprietary back end with its own remote pad, we selected a ModLite Mod Button Lite dual-lead switch to run the IR functions. The dual-lead Mod Button features the same combination of Surefire and Crane leads, but its microscopic footprint means the programming is limited to momentary-only, dual-activation-only configuration. That means there’s only one output mode – press the button and both leads fire. This makes it inappropriate for a combo unit + white light setup, as you typically would only want one or the other. However, in this arrangement, where we’re going to want to activate the IR-only light every time we activate the laser, it’s a good solution. This leaves the separate, REIN remote as your white-light-only switch, so you simply press one or the other depending on whether you’re using NVGs or not. There are a nearly-infinite number of switching and control configurations that can be woven from all the available IR laser, IR illuminator, light, and remote switch choices on the market. But the bottom line is that the prudence of building low-light and no-light capability into your overall preparedness plan is not going to change anytime soon. While this guide is by no means all-inclusive, we hope to give you some reference points to start from in building out your own night vision rifle setup and night-fighting skill set.

This Ford Ranger is equipped with Dillon Aeroâs M134D minigun, which doles out a staggering 3,000 rounds of 7.62...