Poll: How Do You Carry Your Fixed-Blade Knife?

We Discuss Fixed-Blade Knife Carry Positions, Variations, and Important Terms – Answer the Poll and Tell Us Your Favorite

Written by Patrick McCarthy on September 9, 2018

The knife was one of the very first tools developed by primitive man, and even today a trusty blade remains one of the most fundamental tools for survival. However, a knife isn't much good if you can't access it quickly, safely, and reliably. This has led us to consider various options for carrying a knife, and the potential benefits of each.

Now, we're not talking about EDC folding knives, since those are almost always clipped to the hem of a pocket or carried inside that pocket. We're specifically focusing on fixed-blade knives — the kind you'd use for survival, bushcraft, hunting, self-defense, or general heavy-duty outdoor work. 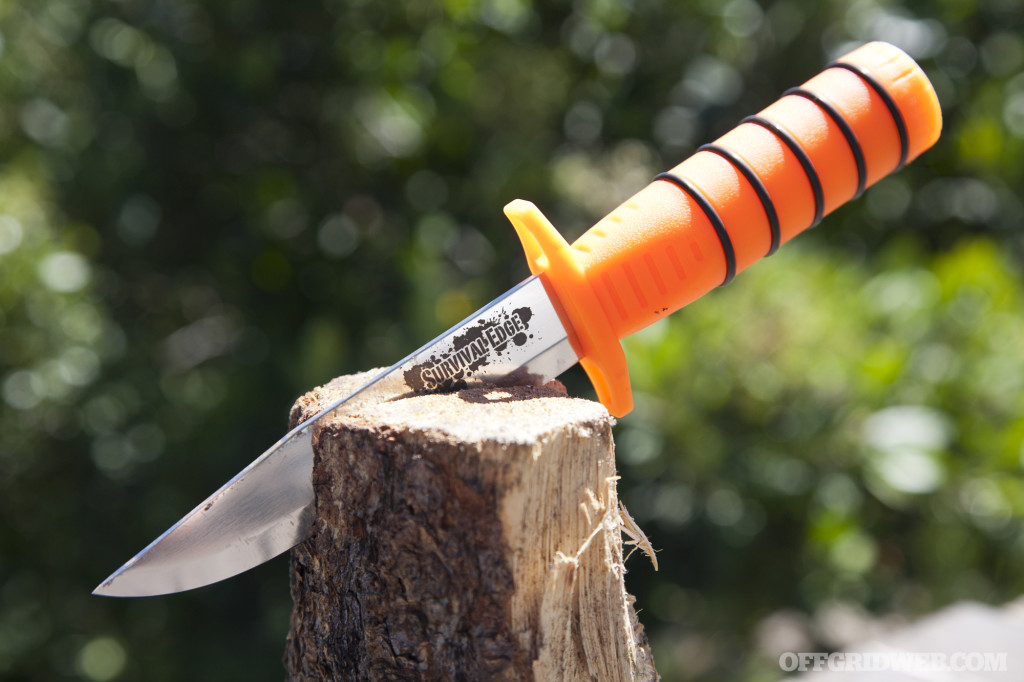 Above: the Cold Steel Survival Edge fixed-blade knife features a hollow handle cavity for a fishing kit and other small items.

Anyone who has shopped for a handgun holster will probably understand knife sheath terms, as they share many similarities. However, for those who might not be entirely well-versed with these terms, we'll provide a glossary below. If you're already fully-versed in carry terminology, you can skip ahead to the Belt Carry section.

WARNING: Regulations in your state/country may restrict how you can legally carry a knife in public. This is relevant to both open carry and concealed carry, although concealed carry is generally more restricted. Laws may also disallow carry of specific types of knives, such as those with double-edged blades or blades over a certain length. Always double-check local laws so you don't accidentally end up in legal trouble.

[Number] o'clock
If you were looking down on your body from above, 12:00 would be your belt buckle, 3:00 would be your right hip, 6:00 would be your plumber's crack, and so on. The most typical knife sheath carry position for a right-handed user would be the 3:00 position; a lefty would usually carry at 9. Strong/Dominant Side
The same side as your dominant hand. If you normally use the knife with your right hand, this would mean carrying your blade on your right side (anywhere between 12 and 6). Read on for more info on this White River Knives Firecraft FC5 and its sheath design.

Weak/Support Side
The same side as your non-dominant hand. For example, a right-handed user carrying on the left of his body.

Keep in mind that the side you carry on and the side you use the knife with are two independent considerations. Some people prefer to use the strong-side hand for a gun and use the weak-side hand for a knife, while others prefer strong side for both. Either way, training is essential to firmly establish your preference and become comfortable with it. You should also practice drawing with your opposite hand, in case your preferred hand is injured in an emergency situation.

IWB or OWB
OWB, or outside the waistband, is the most common method of carrying a knife, and exposes the sheath for quick access. IWB (pictured) and OWB considerations apply to knives much like they do to firearms.

IWB (inside the waistband) carry positions the knife sheath inside the pants while still attaching securely to the belt. IWB carry is usually combined with a cover garment and chosen for concealment purposes.

Canting may make a knife easier to access by angling its handle towards the spot the user would grab, and may make it more comfortable to carry. It's also helpful for concealment. For this reason, many sheaths include a rotating clip that allows for adjustable cant. Above: the belt clip for this TOPS Hazen Legion 6.0 sheath can be rotated 360 degrees for a full range of cant adjustment.

Now that we've covered some of the terms you'll need to know, we'll talk about the most common style of knife carry: on the belt. The majority of mid-sized fixed-blade sheaths will be designed for this carry style, with a clip, loop, or slot that accommodates the belt. 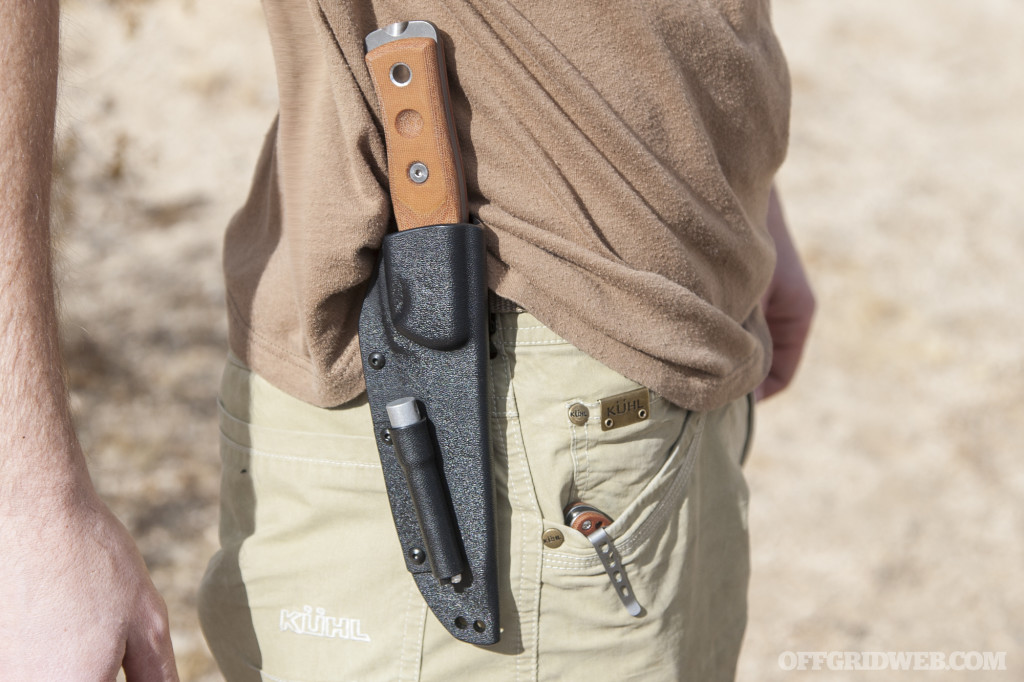 Above: TOPS Fieldcraft with Kydex sheath and included ferro rod, worn OWB at 3:00.

The most typical subset of belt carry involves attaching the sheath to the belt outside the waistband on the strong-side. This would be the 3:00 position for right-handed users, or 9:00 for left-handed users.

Inside-the-waistband carry is one of the best methods for concealing a blade. The sheath is worn much like a handgun holster — for right-handed use, this is generally either between 3:00-6:00 or closer to 12:00-1:00 in the appendix position. Longer blades will be less comfortable to carry IWB, so this style is best for smaller knives. Cant may be added to further improve comfort. Drop-leg carry does exactly what its name implies. The sheath remains attached to the belt, but an extended loop or strap lowers it further down the wearer's leg. Drop-leg sheaths also often have secondary straps or cords that wrap around the thigh, preventing the sheath from flopping around as the wearer walks or runs.

This provides easy access to the knife, and occupies less belt real estate than a sheath mounted directly to the waistband. Some users may also prefer this lower position from a comfort standpoint.

A cross-draw knife is positioned for the wearer to reach across the center line of the body with the strong hand, and draw from the opposite (weak) side. This is not to be confused with weak-side carry, where a right-handed user would carry a knife on his left and draw it with the left hand.

Cross-draw is an option in cases where belt real estate on the strong side is limited. This type of carry usually incorporates positive cant to make the knife's handle easier to grab. In scout carry, a knife is worn horizontally parallel to the belt. Technically, scout carry is just OWB carry with a 90-degree cant, but we consider it unique enough to deserve its own category.

The sheath is typically worn at the small of the back (6:00) but it's also sometimes positioned on the weak side for cross-draw. Scout carry offers comfort, quick accessibility, and can reduce the risk of a handle or sheath snagging as you move through thick brush. Paired with a cover garment, scout carry also offers potential for concealment.

Moving above the waistline, there are a few options for carrying a knife on the upper body: Above: Gerber Ghoststrike punch knife worn on a neck lanyard

Neck carry is only suitable for small and light knives, so this is most applicable to secondary blades for purposes such as self-defense, skinning, or precise carving. A neck knife can complement a larger knife carried elsewhere on your gear.

When open-carried, a neck knife is lightning-fast to access with either hand, unlike most other carry styles that favor one side. When worn behind a shirt or coat, it provides excellent concealment. Solid sheath retention is essential, since neck knives are almost always carried inverted. Tactical backpack straps, chest rigs, and plate carriers all feature PALS webbing for adding MOLLE-compatible gear. This webbing makes for an easy place to attach a knife sheath, especially if that sheath was designed to be directly compatible with MOLLE. Many non-tactical hiking and climbing packs also feature some form of webbing the sheath can be tied to. 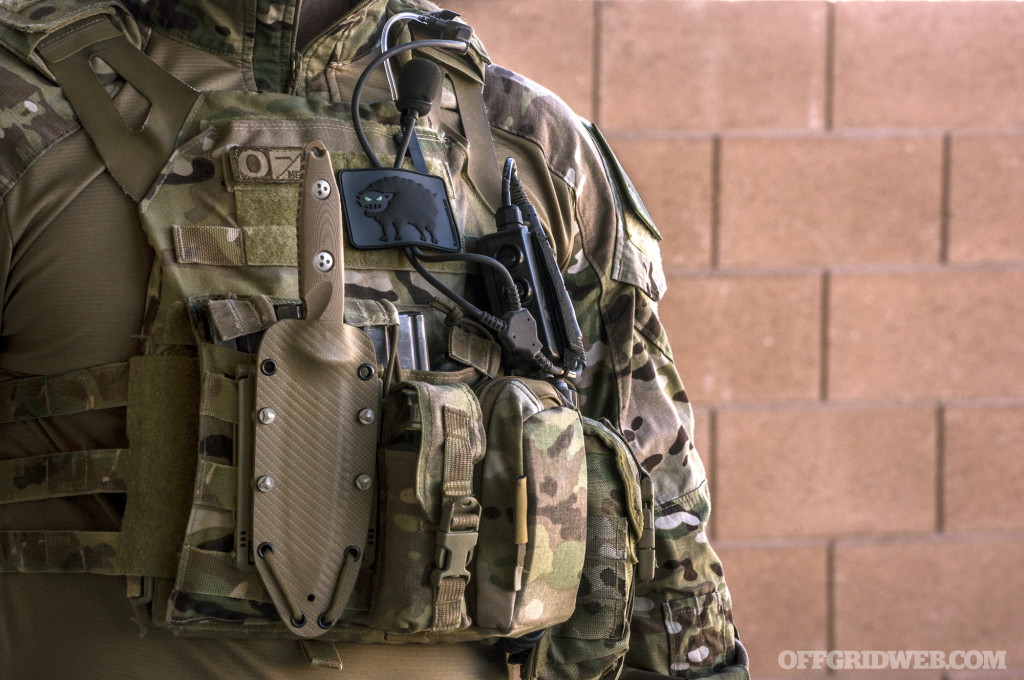 Above: Microtech SOCOM Alpha mounted vertically on a plate carrier.

Combat knives are often placed on shoulder straps for quick one-handed access, or positioned vertically or horizontally on chest webbing. Knives with standalone shoulder slings or harnesses, such as the discontinued Kershaw Military, are far less common but could also fall into this category.

Of course, there are countless other ways to strap a knife to the side of a pack or slip it into a pocket, but most of these aren't immediately accessible while wearing the pack. We'll leave backpack configuration as a subject for another day.

Unless you're into wearing a dagger on a sexy lace garter like a femme fatale, the options for carrying a knife below the waist are limited. Above: OpticsPlanet shows how a paracord line can be used to retain a fixed-blade sheath during pocket carry.

If you have a blade small enough to fit inside (or mostly inside) a pocket, it's possible to carry it there in a few different ways. The first and most obvious is to simply attach it to the pocket hem with the sheath's existing clip, assuming it has a clip. Otherwise, you can use some paracord to tie the sheath to the pocket lining or some other static point, and deploy the knife in a single motion. Above: Gerber Ghoststrike Deluxe worn on a neoprene ankle wrap

Ankle/boot carry is another option for small self-defense-oriented fixed-blades. It can be accomplished with a sweat-resistant band that wraps around the calf and secures the sheath, or with a sheath that attaches directly to the cuff of a boot. Purpose-built boot knives were classically-known as “gambler's daggers”, indicating the sneaky and treacherous history behind this carry style.

So, of all the fixed-blade carry styles outlined in this guide, which do you primarily use? Let us know in the poll below, and see how your preferences compare to those of other readers.

Note: If you carry multiple fixed-blade knives, answer the second poll to indicate where you carry your backup knife.

Some people love serrated knives, and some think theyâre only good for cutting bread. Gluten tolerances aside,...