If You Were Stuck On a Desert Island with Only One Survival Tool, What Would You Choose?

Any time you're having a discussion about difficult choices, the desert island scenario is likely to come up. You know the one — If you were a castaway on a tiny island with a single movie to watch and no other forms of entertainment, which one would you pick? We're not really sure what remote island would have a big-screen TV, electricity, and a Blu-Ray player, but that's beside the point. The point is to think long and hard about your choice, because you'd have to live with it for a long time, maybe even forever. This got us thinking: what if you really were trapped on a desert island, but instead of choosing a movie or music album, you had to choose your only survival tool? At first thought, that might sound like an easy choice — but hear us out and read the scenario below before jumping to conclusions. After reading the background info and additional resources, you'll be able to select either a knife with fire-starter or water desalinator in the poll at the end of this article. In case you’ve missed our previous installments of Survival Scenarios, here’s how it works. We ask you how you’d handle a difficult choice in a hypothetical survival situation. Previously, we asked if you'd rather be snowed-in or snowed-on in a fierce blizzard, or whether you'd bug out or stay put in a panicked stampede on New Year's Eve. As always, today’s post ends with a poll where you can make your choice, and see how others felt about the scenario. Before you decide what survival tool you'd prefer, we'll provide some essential background info. The setting is a small uninhabited island in the Pacific Ocean, part of a remote coral atoll. The island is mostly barren, aside from scattered palm trees and salt-water-tolerant low-lying vegetation. No fresh water source is present, and the entire land mass is less than half a square mile. The only animal life present on the island appears to be a handful of seabirds, a healthy population of rats, and whatever marine life you can find in the clear waters or on the beach. The good news is that the climate is above 80°F year-round unless a tropical storm rolls in (not an uncommon occurrence). You ended up on this island while on a week-long sailing trip with your good friend Philippe, a wealthy retiree and experienced sailor. Three days into the trip, you spotted the island and decided to go ashore and enjoy some solid ground. Philippe said he'd stay behind and anchor the sailboat, so you hopped into the inflatable dinghy and paddled to the beach. After about 30 minutes of walking around, you pushed your way back through the vegetation to find the dinghy — but the sailboat wasn't where it had been. It had shrunk to almost a speck in the distance. At this point, you have no idea what happened, or why your trusted friend would leave you behind. You can't believe it could be intentional, but you also can't think of any other explanation, aside from some sort of catastrophic medical issue that caused him to lose control of the boat. Knowing you couldn't possibly paddle far or fast enough to catch the boat, you stand on the beach and watch as it slowly disappears on the horizon. You're not sure if anyone is coming to look for you — at least not any time soon. Your friends back home know you headed out with Philippe, but no one knows the exact route you took, and no one expects you back for at least a week. You could be stuck on this sandy beach for days, or much longer. This situation completely blindsided you, so you've got virtually zero useful gear. On your person, you have nothing but the clothes on your back — cargo shorts, a T-shirt, a baseball cap, and canvas boat shoes. Your pockets are empty; all your emergency gear was on the sailboat. You recall some miscellaneous garbage washed up on the shore of the island, but nothing overly useful (no anthropomorphic volleyballs, either). The dinghy appears empty aside from the paddles you used to get ashore and a tattered duffel bag with some dock rope. However, upon closer inspection, you see that the duffel bag contains one of the following two survival tools:

Either one of these tools would give you a major head start on surviving the unknown amount of time you'll be stuck on this island. Read on for some of the potential advantages and disadvantages of each choice. 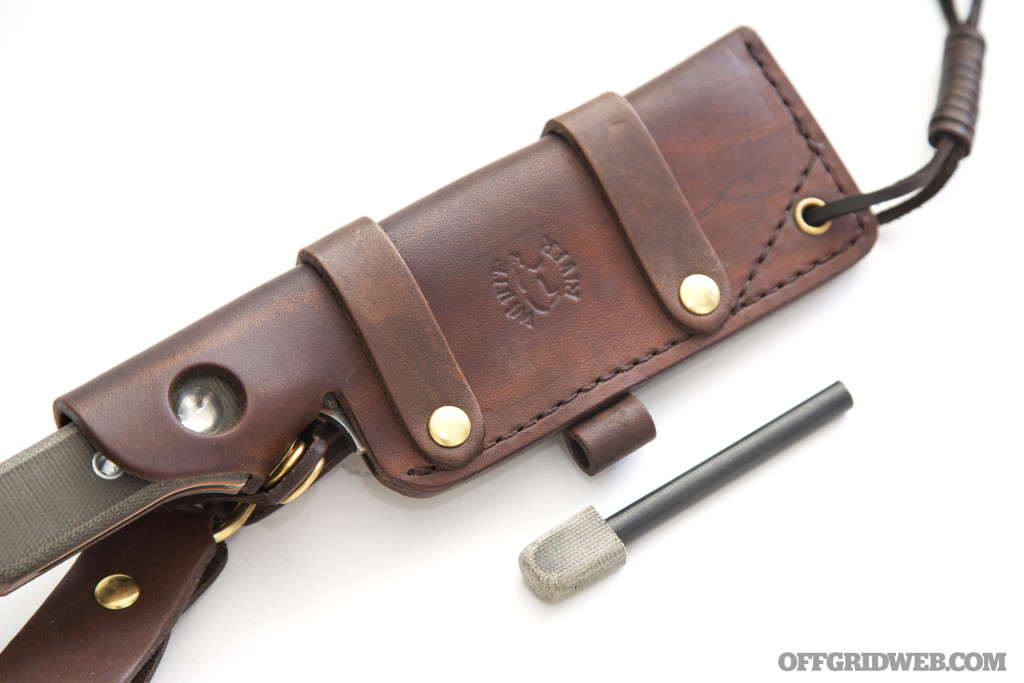 Technically this could be considered two tools, but it's fairly common to see survival knives packaged with a sheath and ferrocerium rod fire starter. You're lucky enough to have both.

As you probably already know, a sturdy fixed-blade knife is one of the most valuable survival tools money can buy. On the island, it'll permit you to chop wood for a campfire, carve simple traps to catch rats or birds, and even spear-fish in the surrounding waters.

If you choose, you can also use your knife to slice up the inflatable dinghy and scavenge its synthetic rubber skin to build a shelter or other tools (we'll get back to this). The ability to build a waterproof shelter will be especially important if a tropical storm hits the island, since you'd end up drenched and miserable without it. The ferro rod will enable fire-starting with relative ease. Just strike the rod with your knife and shower a bundle of palm tree bark and other dry tinder with sparks to get a fire going. Considering the warm tropical weather, you probably won't need the fire for heat, but you can still use it to create a smoke signal for rescue or to cook any food you catch on land or in the sea. The knife and fire-starter provide the ability to make almost everything you need easily — with the glaring exception of drinkable water. Since we know that drinking seawater is always a bad idea, and that boiling seawater will only increase its salinity, the only hope to get a drink is to catch rainwater or desalinate (remove the salt from) seawater. In order to desalinate seawater, you have a few options:

With the knife and ferro rod, finding drinkable water will be your biggest struggle, but not an insurmountable task if you're clever and patient. On the other hand, you could choose the portable desalinator, and have no trouble finding water to stay hydrated.

An emergency device like the Katadyn Survivor 06 requires no batteries or fuel, and is operated with a manual pump to produce more than 6 gallons of drinkable water per day. These desalination devices pass seawater through a reverse-osmosis membrane, eliminating about 98% of the dissolved salts and rendering the water safe to drink. With the desalinator, you wouldn't need to search for materials or build a still — you'd have a indefinite source of clean water as long as the pump remained operational. Katadyn doesn't list an exact lifespan for its Survivor 06 desalinator, but says it should have “many years of trouble-free operation” when used according to the instructions. Since clean water is one of the top priorities for survival, this is a huge advantage. Unfortunately, by choosing the desalinator, you'll have no cutting tool and no quick source of fire. Chopping down trees to build a shelter will be tricky, although you could invert the dinghy and sleep underneath that. Any other cutting will need to be done with a sharpened rock or shell. Spear fishing and carving traps will become much harder. As for fire-starting, you'll be back to primitive methods. You could try starting a friction fire or making a bow drill, but palm trees and tropical shrubs don't normally produce the hard and straight twigs that are conducive to these tasks. If you're unable to get a fire going, you run the risk of becoming ill from eating raw meat, and will be unable to send a clear smoke signal to passing vessels. Considering these advantages and disadvantages, which tool would you rather have for desert island survival: a knife with ferro rod fire-starter, or a hand-pump water desalinator? Enter your decision into the poll below, and feel free to justify that choice in the comments section.

These distress signal devices can be life-saving rescue tools, but...