With Roots in the Austrian Military, the Pinzgauer is a Proven Off-Road Beast

Sturdy and agile as the Alpine mountain horse she was named after (and not the cattle breed that shares its name), the Pinzgauer was born and bred in the European Alps during the early 1970s, then proved worldwide militarily from desert to jungle rivers for decades. These early generation Pinzgauers — now old enough to be exempt from certain U.S. non-EPA import equipment requirements — were gradually decommissioned and released from service by Swiss and Austrian military forces, driving demand throughout the United States and the world.

Today, a vast yet scattered network exists among thousands of knowledgeable off-road Pinz enthusiasts, gathering everywhere from the Colorado Rockies to the Hawaiian Islands. Though on rare occasions you might find a street-legal Pinz tucked nicely into an average parking space, Pinz owners universally own a second vehicle for daily or long-distance driving and preserve the Pinz for hunting, special touring, or work as ranch vehicles. Increasingly, the demand is ratcheting up among savvy preppers looking for a relatively affordable world-class vehicle designed to remain decidedly low-tech, field-maintainable, and (perhaps most important to survivalists) resilient. On that fateful day when all other land transportation grinds to a panicked halt, Pinz drivers claim they'll keep on rolling — along with 11 of their closest amigos.

So when a well-used, low-profile 1975 model was discovered recently, we here at OG jumped at the chance to introduce this high-mobility all-terrain vehicle to our readers. During the process, we discovered some tips that will help our readers select and plan their own bug-out vehicle layout.

We located this Pinz parked on a southwest Florida ranch, the site of a private shooting resort. A breeze blew openly through the rolled-up canvas canopy roof and sides that marked the Pinz as a 710M model. This model was the four-wheel-drive version, but there are many six-wheel-drive 712 models available, which can sometimes be found with snowcat-style tracks. Pinz owners told us the six-wheel version provides a nicer road ride, but the four-wheelers are more nimble in tight quarters. The Pinz is available in the rare 710K van model with a sheetmetal roof and hard-panel sides, which is more ideal as a bug-out vehicle considering a soft top is a security risk and vulnerable to cold weather. Optional trailers feature locking hubs to prevent roll away on slopes. They can hold a week's worth of supplies,...

Depending on condition, a Pinz 710M four-wheel soft top might range from $8,000 to $14,000. The 712 six-wheeler could cost anywhere from $12,000 to $20,000, says Dan Fanning of the 35-member Rocky Mountain Pinzgauers, one of the largest Pinz clubs in the United States. Other vehicles currently located online can command higher prices with add-ons and customizations.

The torque-friendly Pinz was known for its ability to keep going in high water experienced during summer monsoons, owing in part to the momentum maintained by shift-on-the-fly capabilities. This kept a ranch owner's family high and dry with 360-degree visibility for wildlife and livestock viewing. The Pinz punched through creeks, easily plunging down steep embankments and up far sides.

This could be in part because of its complete absence of front and rear center axle “pumpkins” common on 4×4 trucks. On other vehicles, these can leave you high-centered, meaning one or some of your tires aren't touching terra firma because the underbelly is caught up on steep trails or boulders. Without pumpkins, a Pinz is far less likely to get high-centered. One look fore and aft reveals amazing 45-degree approach and departure angles, with almost 15-inch ground clearance in a narrow and nimble radius that appears no larger than a Jeep.

To create the amazing clearance and space, Austrian Steyer-Daimley-Puch engineers placed the forward-mounted motor in a slightly offset angle, situated beneath a removable cowling between driver and shotgun seat. The 2.5L aluminum four-cylinder inline block is air cooled by an enormous fan, making 92 horses at 133 lb-ft of torque at 2,000 rpm, drawing upon dual, two-barrel Solex36 NDIX carbs, similar to the Volkswagen engines of the early 1970s. (This engine was consistently produced from 1971 through 1987, while later and even current models went to a turbodiesel VW engine.) Advanced for its time and still solid by today's standards. the hydraulic shift-on-the-fly levers allow for...

The Pinz features a five-speed manual transmission with a short driveshaft fitted into a two-speed transfer case just forward of the rear axle, effectively providing the driver with 10 forward speeds and two speeds in reverse. They're all closely meshed and geared low, starting with a 5.33:1 first gear ratio and no overdrive. This allows the Pinz to cruise at 60 mph, making about 15 to 16 mpg on a 20-gallon fuel tank for a max range of about 300 miles, although off-road usage in low range will seriously reduce that. A floor shift lever took us through the five speeds, while a shorter high and low-range control lever was close at hand.

Owners speak of the famous Pinz “backbone” as a massively overbuilt housing containing the drivetrain and forming a support system for the chassis. The suspension is a swing-axle type, with portal units taking power directly from the differentials to the wheels. The differentials may be locked. Dual rear coil-springs provide a secure and sure-footed connection on uneven or rain-rutted inclines. Power steering isn't included, preventing over-steerage and eliminating one more thing to go wrong. Six-wheel-drive models make use of leaf springs. 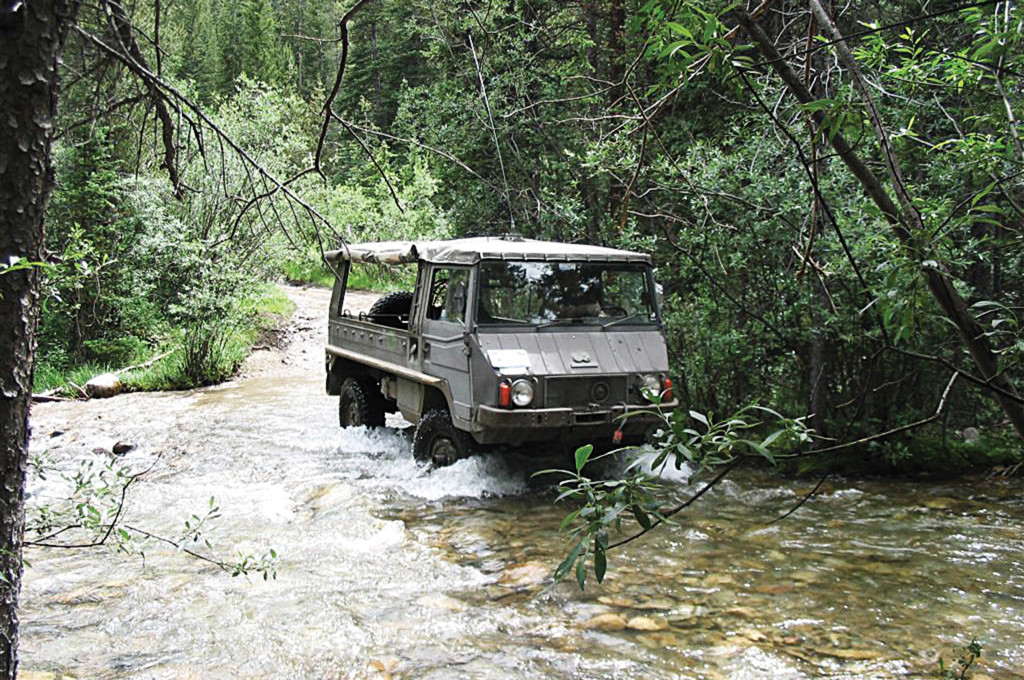 The hydraulic transmission was “revolutionary for its time” because it allowed the driver to shift into four-wheel drive without exiting the vehicle to lock out external hubs, Pinz enthusiasts say. Pointing out the three levers located centrally on the dash at the driver's right hand, one owner said the first lever enables the driver to engage the forward two wheels on the fly without losing momentum on steep grades. The second and third levers enable the driver to lock out the front and rear locking differentials for the ultimate in troop or utility transport, respectively.

An external dual-battery compartment provides easy maintenance access via a 24-volt system. The access is consistent with the design philosophy, complemented by a series of circuit breakers and no electrical fuses, including an ignition system sealed against water. Electronics consist largely of the coil, a generator, and spark plugs.

The driver and passenger compartments are separated by a removable series of heavy-gauge wire fence-like panels that don't impede visibility or airflow. Cabin circulation is improved thanks to multiple fans. The rear compartment bench seats are accessible through a rear swing-out half-door. The rear backs of the bench seats may be folded down to provide a flatbed for transporting pallet-sized equipment. In keeping with its military heritage, the spartan interior is devoid of any nonfunctional frills.

The Rocky Mountain Pinzgauers have assisted authorities during snowstorms by serving as medical transports and emergency search vehicles, Fanning says. But for fun, the group stages “treffens” or gatherings throughout Colorado and even in out-of-state detours like Moab, where owners navigate rocky passes, climb slabs of granite, and punch through snow.

Having acquired his first Pinz 20 years ago, Robert Rainek of the Milwaukee-based North American Pinzgauers said he originally had no idea how dependable and bombproof the Pinz were until he attended some off-road demos in Leadville, Colorado, where the Pinz ran side by side with Jeeps, Hummers, and Land Rovers. He now has 50 and is constantly impressed with the level of maintenance the surplus Pinzs arrive with when they are located, traded, or resold. The Pinz's open-door policy makes entering, exciting, and protecting your ride pretty easy – even with a...

“Now the preppers aren't looking for something too fancy,” Rainek said. “Just something sort of low key. Many people are amazed that the vehicles were so advanced, even by today's standards. These saw extensive use from North Africa to the Middle East, Australia, and throughout Europe.”

Rainek said potential buyers were concerned about the engines overheating in the desert. Fanbelts were undone on test models and the engine still did not overheat, he said. And these have higher ground clearance than military Humvees, he said, due to the portal axles, even with the standard military tires, while many opt for Super Swampers and other upgrades. We have long looked to the Swiss and to Austria for excellent weapons system engineering and innovation, and like a true world-class weapon, the Pinz has proven itself around the world — from tropical terrain to snow-capped mountains. 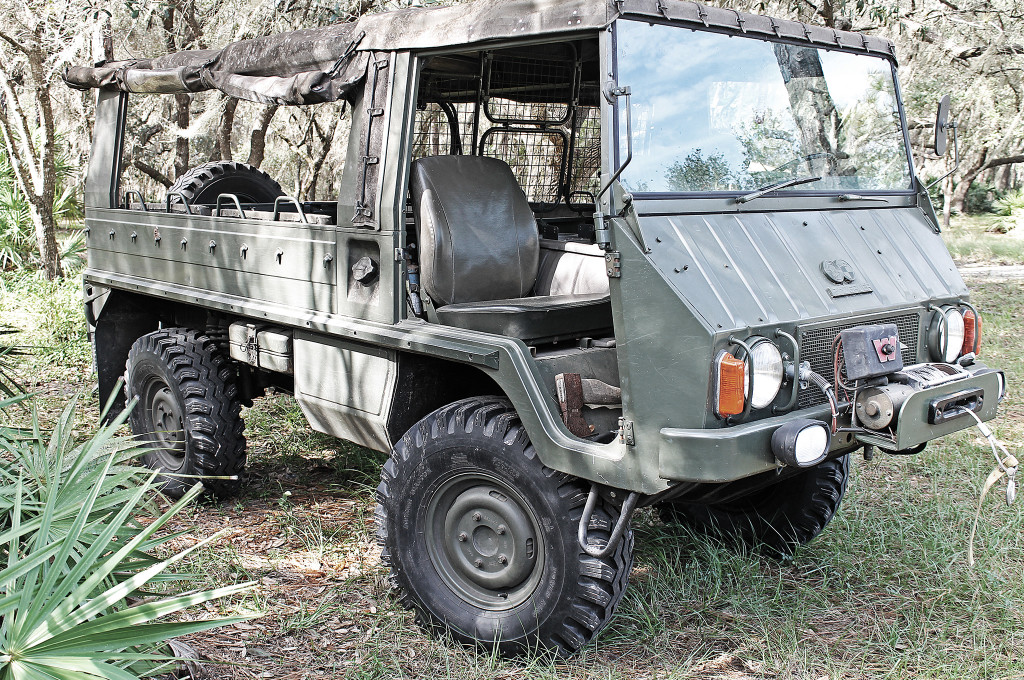 If you're looking for a conversation starter, the Pinz draws a crowd. If you're looking to get away from the crowd, you might not find anything more sure-footed except the Alpine horse. But then you won't be able to bring a dozen of your closest friends, shouting in your best Austrian accent, “Get to da Pinzgauer!” Can you acquire something old, indestructible, and somewhat unique without the risk of being labeled a member of “a cultlike following?” Pinzgauer owners don't seem to mind, and increasingly these drivers are launching vehicle clubs, social media pages, and regional rallies, driving the desire for more modifications. The most popular upgrades for a Pinzgauer are:

Ignition system: An improved aftermarket distributor cap and fully water-shielded wiring consistent with mil-spec protection can ensure starting capabilities in the harshest conditions. It's all compatible with the stock 24-volt dual battery system.

Winch: Capable of being placed fore and/or aft on the Pinz, a winch can be used to assist with ascents, descents, or recovering stuck vehicles.

Step assists: This improves one's safety while entering and exiting the high-riding vehicle. The looped steps are aftermarket single steps to be placed forward of the cab. The center-step assists fit centrally near the hub of the stock wheels and are said to not interfere with mobility or traction.

Other considerations: The no-brainer is a tire upgrade, but there are other options, including but not limited to a toolkit (including winch gloves, tall jack, and tow strap), tire pump and repair kit, and extra fluids.

Stories from a Van filmed a 15-minute video showing how he set up his innocuous-looking Nissan NV200 panel van for...